We asked Dr. Astley a couple of questions about his research. Check out his responses below! 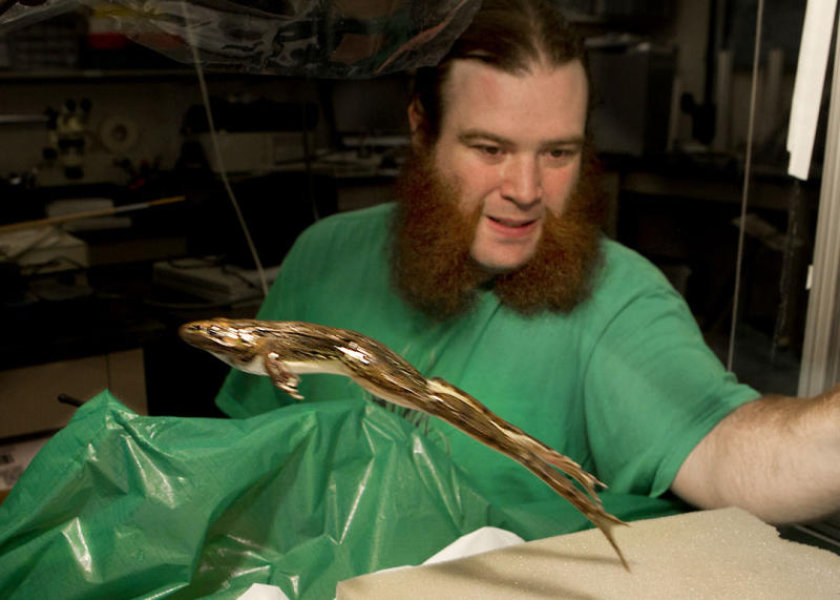 My research focuses on the biomechanics of animal locomotion, at the intersection between biology and physics.  In order to move through their environment, animals must use physiological processes to generate force, transmit this force via the musculoskeletal system and morphology, and control it via the nervous system, all while navigating through sometimes mechanically complex and heterogeneous environments. I use a variety of systems to study these principles, including snakes, frogs, and early tetrapods. Snakes are capable to traversing a tremendous range of environments with a greatly simplified body plan, dramatically changing their interactions with the environment using different control strategies and gaits, such as sidewinding, lateral undulations and concertina locomotion. Frogs use elastic tendons in a catapult mechanisms, allowing them to generate jump power outputs far beyond the limits of muscle power, showing the potential for musculo-skeletal morphology to dramatically alter function. And early tetrapods moved through a novel and challenging mechanical environment with primitive limbs and limited control, posing an intriguing biomechanical puzzle. I study these and other systems using a variety of techniques on the biological systems (e.g. motion capture, high-speed video, inverse dynamics, in vitro muscle testing), along with construction of biomimetic robots and robophysical models, which allow us to command different control schemes and experimentally manipulate morphology in a controlled, repeatable manner.

What types of technical expertise do students that work in your lab gain?

Students in the Astley lab would be able to learn a wide variety of skills for working with live animals and robotic systems. Students would learn to gather biomechanical data from live animals using high-speed video, motion-capture technology, force sensors, electromyography and sonomicrometry (which detect muscle activity and length), along with in vitro experiments to directly assess muscle contractile properties. This data can be processed using techniques such as inverse dynamics, which allows reconstruction of torques and powers at each joint during a movement, and phylogenetic comparative methods, which can test for correlations across evolutionary time, detect evolutionary constraints, and test models of trait evolution. Robotic systems can serve dual purposes, both demonstrating understanding of the fundamental dynamics of a system and serving as a robophysical model for the organism, allowing us to test morphologies and behaviors in a rigorous, repeatable fashion not typically possible in living organisms. Students will learn how to construct and control robots, including programming, 3D printing, design software, assorted controller boards, and integrating sensors, eventually producing their own robotic systems to test their thesis hypotheses.