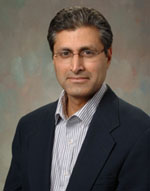 Dr. Ali Dhinojwala, H.A. Morton Professor of Polymer Science, has been a part of the College of Polymer Science and Polymer Engineering (CPSPE) for over twenty years, first serving as a professor and then as the Department Chair from 2008-2012. He has served as the co-Principal Investigator of the Biomimicry Research Innovation Center (BRIC) since its inception in 2011, and during his time at the University has helped to hire several faculty members who teach here still today. His participation in the College as well as his dedication to building a successful team of faculty and staff made him a perfect fit as interim dean.

“We are facing a challenging time as a University and as a College,” Dhinojwala said. “All of us must take an initiative to help CPSPE and UA overcome these challenges and build an environment that supports the dynamic research that takes place at CPSPE.”

Dhinojwala plans to strengthen the college by building on the momentum it has gained over the years. His vision for CPSPE includes ensuring that it continues to be a leader in polymer research, and emphasizing a team building approach in order to make the transition to a new dean as successful as possible.

Dr. Dhinojwala obtained a Ph.D. in Chemical Engineering from Northwestern University and spent two years as a research scientist at University of Illinois at Urbana-Champaign. After spending one year at GE Plastics, he joined The University of Akron in 1997. His current research is in the areas of adhesion, friction, and wetting. His group has developed unique surface technique to study buried polymer interfaces. His recent interest is in understanding how geckos and spiders use adhesives for locomotion and prey capture. These studies have led his team to develop synthetic adhesives using aligned carbon nanotubes. His latest passion is on developing structural colors, a strategy inspired by bird colors.