An Odd Kind of Fame: Stories of Phineas Gage

An Odd Kind of Fame: Stories of Phineas Gage was published by MIT Press in September, 2000. It is one of a very small number of works devoted to Phineas Gage and, up to 2000, the only book ever written about him. An Odd Kind of Fame gained MIT Press the year 2000 excellence award in the History of Science and Technology section from the Professional and Scholarly Division of the Association of American Publishers. In June 2002 the International Society for the History of the Neurosciences awarded it its inaugural prize for the book making the most outstanding and original contribution to the history of the neurosciences between 1999 and 2001. A paper back edition was published in August 2002.

A list of all the reviews of An Odd Kind of Fame about which I know that appeared up to September 2012 will be found under Reviews. 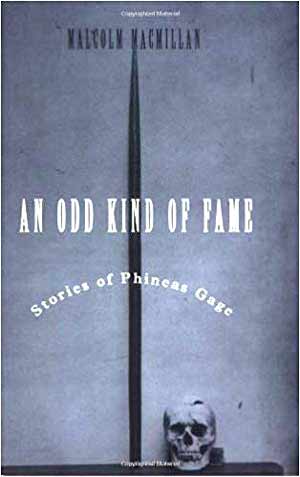 The Odd Kind of Fame of the title is meant to convey the fact that we know almost no more about Phineas and the changes in his behaviour than is contained in the few hundred words John Martyn Harlow devoted to him. Despite that, he is still famous enough, some 150 years after his accident, to appear in almost 60% of all textbooks of psychology, neuropsychology, and the neurosciences. The subtitle, Stories of Phineas Gage , is meant to convey that there are as many different and mostly grossly inaccurate stories about Phineas Gage in the scientific as in the popular literature. Establishing the real significance of Gage's case required (and still requires) correcting these erroneous and often tendentious representations.

The book contains facsimile reproductions of the 1848 and 1868 reports on Phineas Gage by John Martyn Harlow, the physician from Cavendish who treated him; the 1850 report by Henry Jacob Bigelow, the Professor of Surgery at Harvard who examined Gage about a year after his accident; and the entries about Gage prepared by John Barnard Swets Jackson in 1870 for the Catalogue of the Warren Anatomical Museum, where Gage's skull and tamping iron were deposited in 1868. Many of these documents are difficult to find even in specialist medical history libraries and are essential to establishing the truth about what actually happened to Gage.

The background to Phineas Gage, the accident, and the news about him

In the first four chapters, I place Phineas in the New England farming community in which he was born and grew up, set out what can be inferred about his education and how he acquired his work skills, describe the kind of work he was undertaking when he was injured, and document the location and circumstances of his accident. Maps, photographs, documents, newspaper reports, and an (almost) eyewitness account are used as illustrations and to correct the date of his death. I give particular consideration to Gage's status as a foreman that may give meaning to Harlow's otherwise odd phrase that Gage was “a shrewd, smart, business man.”

I trace how the news of Phineas' accident and Harlow's treatment of him was received in the popular and medical press and how Gage's injury and treatment became a standard against which other head and brain injuries were compared.

However, I did not have, and still do not have, descriptions of how Phineas behaved, especially how he comported himself at the public exhibitions he gave with his tamping iron. He was in Concord on a Tuesday some time after November 1851 and again in Montpelier, Vt, in August 1852. Wouldn't it be wonderful to find a letter or diary where someone recorded what they saw?

The physical and psychological damage suffered by Phineas

Chapters 5 and 6 are devoted to the physical and psychological damage Gage suffered. I summarise and bring out the bases of the nineteenth century disputes over the passage of the tamping iron -- how far to the right of the mid-line and how far to the front of the coronal and sagittal sutures it passed -- and the consequent disputes over the location and extent of the damage to Gage's brain. Twentieth-century attempts to resolve the differences of opinion, including the 1982 CT scan study by Rick and Ken Tyler, and the 1994 computer-based reconstruction by Hanna Damasio and her colleagues are evaluated critically. (A study in 2004 by Peter Ratiu and Ion-Florin Talos came too late for inclusion in Odd Kind of Fame, but to my mind it gives the most thoughtful and credible estimate of the iron's passage and damage done. It is described on the 'Damage' page).

I set out the little that is known about Gage's psychological and behavioural characteristics before and after the accident, most of which comes from Harlow. From my extensive but unsuccessful searches for more information about Phineas, I believe that, at the time it occurred, his case was regarded in popular and medical circles as little more than a sensational story. Only later, and in limited medical circles, did Gage himself become important.

We know that a number of physicians examined Phineas not long after the accident because they gave him letters and testimonials which he asked people to inspect during his public exhibitions. The names of all these physicians (and some others) are in the 'Questions' section. Perhaps one of them is a distant relative of yours who may have seen Phineas.

Phineas Gage and the localisation of psychological functions in the brain

My somewhat complex treatment of the history of localisation, covered in Chapters 7, 8, and 9, begins with the organology -phrenology- founded by Franz Joseph Gall. I show that a complex interaction between philosophical stance, the role given the ventricles, and methods of dissection and related techniques delayed understanding of the anatomy of the brain and of its functions until the early nineteenth century when Gall's work began. Although fundamentally flawed, Gall's work forced an appreciation of the fact that the brain had structures other than the ventricles and had psychological functions other than the very general ones postulated by the cell psychology associated with the ventricles.

I then bring out three important aspects of the development of sensory motor physiology and psychology that replaced Gall's system: Alexander Bain's associationist psychological theory, the clinical observations that some kinds of frontal lobe damage caused language impairment, and David Ferrier's hypothesis that an inhibitory-motor function was localised frontally. I show that the changes and presumed changes in Phineas Gage were a not unimportant factor in resolving the debates over the localisation of motor and language functions.

Phineas Gage in relation to brain surgery and lobotomy

References to Phineas Gage in the literature on the development of brain surgery proper are infrequent. In Chapter 6 I show how David Ferrier's description of the alterations produced when the frontal lobes of his monkeys were removed set the stage for surgery for the removal of tumours from the frontal lobes. However, there were such discrepancies about what counted as a 'symptom' that Gage had disappeared from the brain surgery literature at about the time the twentieth century began.

Phineas Gage is often cited as a direct precursor of operations for the cure or amelioration of psychiatric disorders -- especially for lobotomy. The original psychiatric and neurological literature reveals no evidence for any such role.

Phineas Gage and theories of thinking

According to the theories of Alexander Bain and David Ferrier, rational thinking and choice depended on the inhibition of all but one of a set of competing thoughts or ideas. I examine the parallels between the Bain-Ferrier theories of thinking and that of Sigmund Freud, and conclude that Freud knew enough about their theory, and about Phineas Gage, to use that knowledge in formulating his own inhibitory theory of repression.

The popular and scientific stories about Phineas Gage

Chapters 13 and 14 are devoted to the popular and scientific stories about Phineas Gage. Almost all share the defect of departing from what we actually know about Gage. They exaggerate the psychological changes caused by his accident, presenting him as less personally stable and less settled in his employment than was probably the case. I demonstrate that many of the scientific stories are no more accurate than the popular ones.

Many of these inaccurate stories are total fabrications. They could be put to rest completely with more information about exactly what Phineas did in New England, especially when working for Jonathan Currier in Hanover. His duties as a coach-driver in Chile are just as important. I particularly need descriptions of Phineas in Valparaiso which, at that time, had a large enough English-speaking community to publish several English-language newspapers. Does anyone have a distant relative who was involved or knew about the stage-coach lines there? Or ran a business, or was a missionary or medical worker in Valparaiso in the 1850s?

John Martyn Harlow and the truth about Phineas Gage

Finally I turn to Harlow himself and the question of the truth about Phineas Gage, and emphasise that practically all we know about Phineas Gage comes from Harlow. Although what he tells us is not free of having been filtered by his phrenological and other beliefs, it is the basis for all the stories about Phineas, both those that are true and those that are false. In fact, until 2012 it continues to serve as the truth about him. Alternative descriptions of Phineas are therefore not merely equivalent discourses told in a different language -- they are simply not true.

Corrections to An Odd Kind of Fame

p. 47, para 1: The inscription actually reads 'This is the bar that was shot through the head of Mr. Phinehas P. Gage at Cavendish, Vermont, Sept. 14, 1848. He fully recovered from the injury & deposited this bar in the Museum of the Medical College of Harvard University. Phinehas P. Gage Lebanon Grafton Cy N-H Jan 6 1850'

p. 108, para 2: The year of Gage's death is 1860, but the only other date on the records is 23rd. May for the funeral/interment, and only Gray's Funeral Record gives 'epilepsy' as the cause of death.