A casket full of life: David Giffels muses on mortality in new book 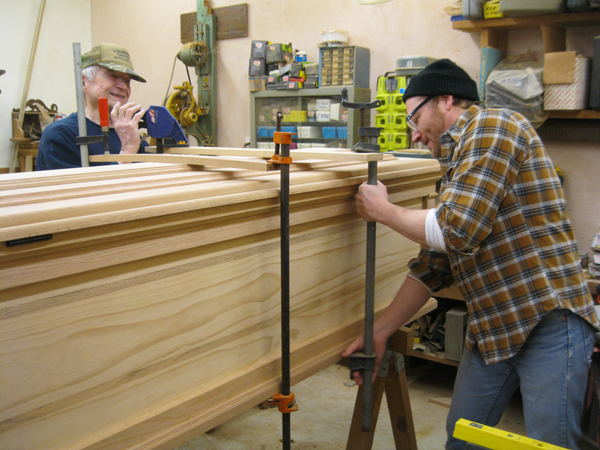 David Giffels builds his own coffin with his late father, Thomas.

Whereas the epic poet Homer sang of Troy, and Virgil of Rome, David Giffels — whom the New York Times recently hailed as the “Bard of Akron” — has been chanting the tragicomic song of his hometown for most of his career.

The former award-winning columnist for the Akron Beacon Journal has chronicled everything from the city’s abandoned rubber factories to the colossal amounts of cheese heaped on the salads at Luigi’s Restaurant.

Over the past decade, though, Giffels has covered a new beat, reporting on the metropolis, teeming with memories, that is his mind, mapped in his critically acclaimed memoirs “All the Way Home: Building a Family in a Falling-Down House” and “Hard Way on Purpose: Essays and Dispatches from the Rust Belt.” 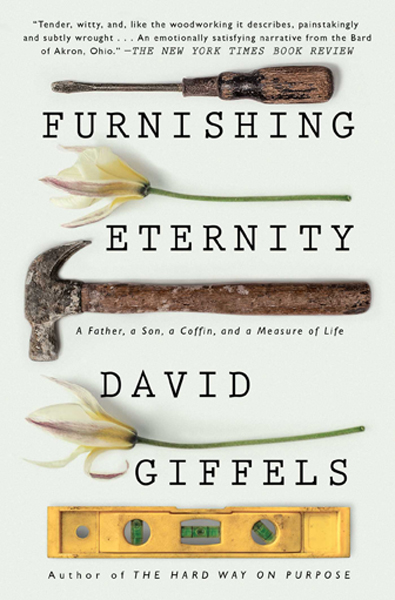 In January, Giffels, an associate professor of English at The University of Akron, released what is perhaps his most probing work to date: “Furnishing Eternity: A Father, a Son, a Coffin, and a Measure of Life,” a poignant meditation on aging and mortality, friendship, and the bond of a father and son. In the memoir, he enlists his 81-year-old father — a retired engineer and skilled woodworker — to help Giffels construct, of all things, his own coffin.

Despite its thematic heaviness, the project began as a lighthearted experiment, springing from a playful argument with his wife, Gina, about his mode of interment. Giffels, repulsed by the ostentation of commercial caskets, insisted on being buried in a cardboard box.

“Because she wanted something very formal, I was driven to want something very non-traditional, which somehow led to a conversation between me and my dad, who’s a fine woodworker, that we could build a casket ourselves, and it was more or less something I said out loud, and it was kind of hanging in the air long enough that it started to be an idea,” Giffels says.

But the idea was never really about the coffin, he adds. He simply wanted to spend time with his aging father, to tinker with his tools and relive childhood memories. While he was at it, perhaps he would jot down some purely “theoretical” and perfunctory reflections on mortality.

But Giffels soon learned that death, that most ponderous of subjects, is not to be taken lightly.

“The idea turned on me,” Giffels says, referring darkly to the “writing gods” who, in a kind of vengeance, reminded him that life and death are never merely theoretical — and that not even the writer, that godlike maker of worlds, can fully control the narrative of his life.

For, shortly after beginning the project, his mother, Donna, and his best friend, John Puglia, died of cancer. Giffels, shattered, groped for meaning amid what he calls the “chaos of wreckage,” an incomprehensible grief which, like the wood in his father’s shop, he struggled to wrest into orderly form.

The result of that struggle was “Furnishing Eternity,” which took shape as Giffels became painfully aware that his time with his ailing father, Thomas — whose remitted cancer had returned — would soon come to an end.

“My growing awareness of my father’s mortality made my time with him all the more precious and all the more urgent,” he writes in the book.

While working on the coffin, Giffels was struck by the unusual patience of his father, who in every other respect merited his family nickname, “antsy pants.” Thomas would guide his son — himself no slouch when it comes to handiwork — with wisdom and grace, knowing precisely when to step in, and when to step back, while Giffels fumbled with the router (the one tool that “befuddles” him, he says).

“That little lesson has kind of recurred to me a few times in the classroom,” says Giffels, who primarily teaches creative nonfiction as the campus director of the Northeast Ohio Master of Fine Arts program. “The one thing that he embodied, that I always try to remember … is that teaching requires humility, even though it seems like you are the center of attention in the classroom … it really requires listening and empathy.”

His father’s most masterful piece of instruction, however, was the optimism and courage with which he lived each day after the death of his wife. Whereas Giffels had become “obsessed with grief,” his father, summoning an almost otherworldly strength, became the “most alive man” he knew.

Indeed, in a book that is ultimately more about life than death, Giffels takes his epigraph from the poet John Donne: “I am a little world made cunningly / Of elements, and an angelic sprite.”

Although Thomas passed away three days after the release of the book, that “sprite,” that spirit of life, continues to glow in the heart of his son, and in his book, which is itself a “little world made cunningly.” Indeed, the book is a kind of “casket,” which in its original meaning, Giffels points out, by way of the Oxford English Dictionary, is “a small box or chest for jewels, letters, or other things of value, itself often of valuable material and richly ornamented.”

Giffels has been “cunningly” making things — music, furniture, books, a coffin — for most of his life. It is no coincidence that the word “poet” comes from the Greek word for “maker.”

So it is not surprising that he was at first disappointed with the store-bought wood he used for the casket. It bore no relation to him — it lacked character and soul. Then, in a memorable scene, he accidentally cuts himself with the router and bleeds into the wood, pouring his life into it.

Giffels has done the same with “Furnishing Eternity.” Here the Bard of Akron has poured out the song of his life, which is at once a libation and elegy for those he loved best.

Watch the full interview, and hear David talk about teaching, journalism, the writing process, playing in a band, and his “one rule” as a professional writer.