Over the decades, love has bloomed all over The University of Akron campus — in class, over meals at the Student Union, even on the soccer field! With another Valentine’s Day upon us, we asked our alumni couples to reminisce and many happily shared their stories. We’ve highlighted a few here, and there are many more on our Facebook page.

Soccer has been a win-win

Christina Marion was in her last semester at UA when she was introduced to Rob Drsek at a home soccer game by mutual friend, Eric Gelsomino. 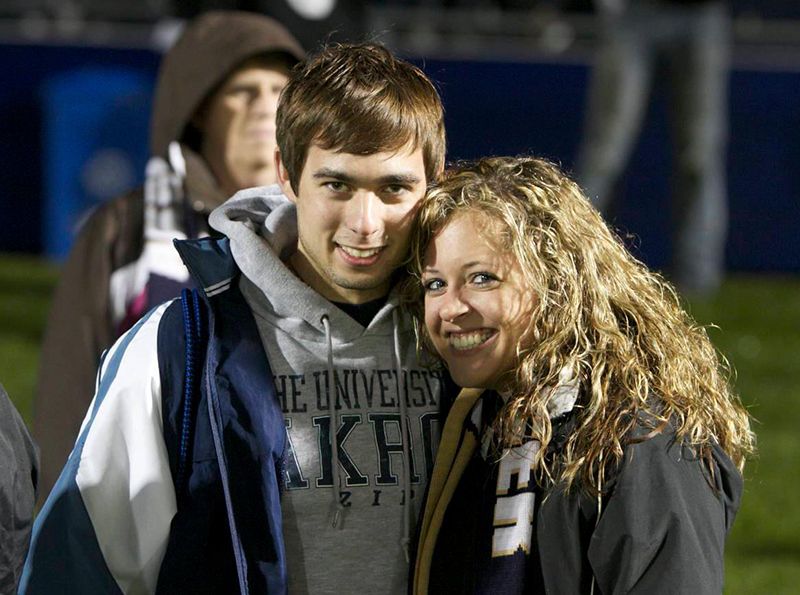 Rob and Christina Drsek at the soccer field that played such an important role in their courtship.

While Christina had a communications degree focused on radio and TV, Rob was still earning his degree in civil engineering. She often made dinner or baked for his study groups so they could spend together. Rob was an AK Rowdie, so they did attend sporting events together — everything from track and football to men’s and women’s basketball and soccer.

During his last year, Rob was the mix captain on the College of Engineering’s Concrete Canoe Team. “He spent a lot of time with his boat,” says Christina. “I would often joke that he spent more time with his boat then me!”

The engineer does have flair for romance, though.

With friends and family as co-conspirators, he got Christina to campus on July 25, 2014, by saying he’d been hurt playing soccer. When she arrived, she saw that Rob had set up five signs along the sidewalk to the soccer field, each bearing the word “like.” At each sign, a family member read her something Rob had written. At the end on the sidewalk, there was Rob, and he proposed.

Their wedding on Oct. 17, 2015, in Youngstown had many nods to UA. There were Zippy cookies at the reception, and the groom’s cake displayed both a soccer ball and a concrete canoe.

Today, Christina works on the production staff for the Cleveland Browns and Cleveland Indians. Rob works at FirstEnergy as a nuclear engineer III. He still helps out with the Concrete Canoe Team, and they attend many Zips athletic events.

The Drseks are expecting their first little Zip in June.

Mutual love of arts and athletics

“My husband and I met at the Student Union for lunch every day for four years,” says Courtney Johnson-Benson.

“We were introduced by a mutual friend and quickly realized we were unknowingly attending the same University,” recalls Courtney.

She was a political science/pre-law major and a dance minor, and Toby Benson was a middle-level education major in social studies and science. 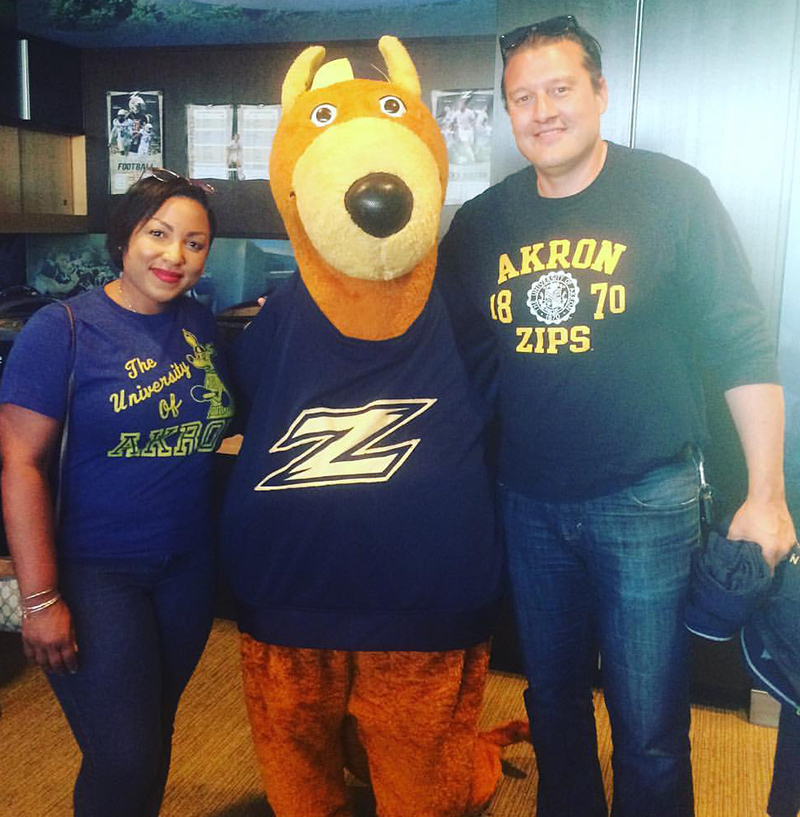 “We both worked part-time and attended school full-time, so we got off to a slow start, but as years progressed we were soon inseparable,” says Courtney.

In addition to those weekday lunches, they also went to Zips football games and live events at E.J. Thomas Performing Arts Hall. “We love the arts and athletics equally, and that is what brought us together,” adds Courtney.

“Our engagement photo was taken on the steps of my favorite building on campus, Buchtel Hall,” says Courtney. “This was an important place for both of us, and we wanted a reminder of where we fell in love.”

Now married for nearly 10 years, Courtney is now an assistant director in the Office of Admissions here at UA. Toby is his 11th year of teaching for Massillon City Schools, where he also is a football and baseball coach.

The Bensons are still going to games, events at Thomas Hall and Toby is on the Roo Crew, helping out at Admissions events.

“We plan to do a fun photo shoot here on campus for our 10-year wedding anniversary in June,” says Courtney with a smile.

The University of Akron campus was much smaller in the days when Dr. Gary and Pamela Williams were undergraduate students. They balanced their studies with campus activities and plenty of time spent together. By the time they crossed the stage at Commencement in 1968, they knew they’d be partners for life.

He as a physician and she as a teacher and community volunteer, they have been devoted to their Akron community and their alma mater.

Here’s what they said during a 2015 interview, as the Dr. Gary B. and Pamela S. Williams Honors College was named for them.

It was fall 2004 when freshmen Brittany Wolonsky and Craig Rohner met in an honors psychology class. They began to “hang out” and quickly became friends.

“We ‘officially’ started dating in early December of that semester,” says Craig.

Travel would bring Brittany, a psychology major, and Craig, a general business administration major, even closer together.

“Dr. Doug Hausknecht recommended a study abroad program since I was interested in international business,” Craig recalls. “Britt had a passion for traveling, and I convinced her to sign up for the trip with me. We ended up going to Paris and London in the summer between our freshman and sophomore years. She switched her major to human resources, and I changed to international business.”

Brittany joined Delta Gamma and Craig joined Alpha Sigma Phi. She worked as a manager of the game room in the Student Union and he worked in judicial affairs. 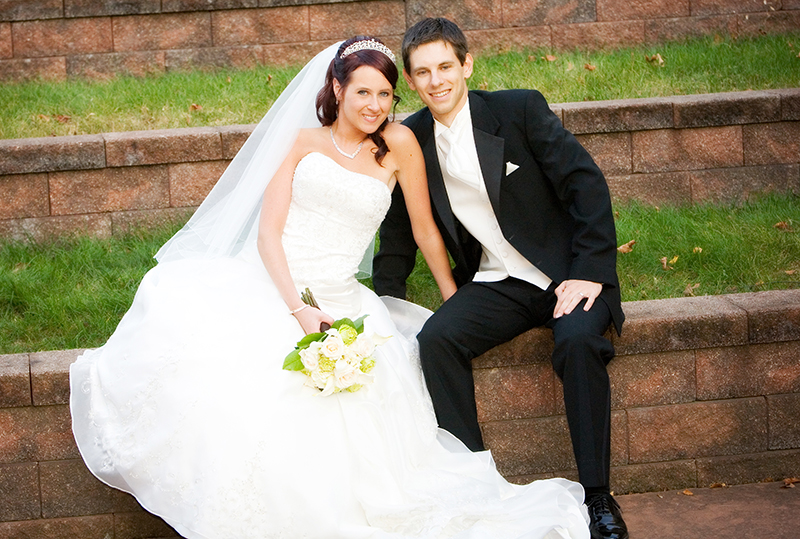 Brittany and Craig Rohner on their wedding day.

“I did propose to Britt on campus,” says Craig.

At a movie challenge night among the Greek organizations the semester after their graduation, with the Student Union Theatre as the venue, Craig put together a video proposal and asked many of her friends to attend the event. After all the Greek life movies were screened, his proposal video filled the screen and Brittany’s friends escorted her down to the front where Craig says he gave her the ring and, “Thankfully, she said yes!”

Married in 2009, the Rohners now have two young sons. Brittany is human resources manager for four manufacturing and research sites at Omnova Solutions. Craig is an analyst at Goodyear’s corporate headquarters. Brittany is on the alumni board for her Delta Gamma chapter, and Craig serves on the advisory board for Alpha Sigma Phi at UA.

“Our time at The University of Akron was important to us, and we truly enjoyed it,” notes Craig. “We are blessed to have made so many close friends from the University that we still see regularly. They all have been a big part of our journey and our success as a couple.”

Is your marriage thanks in part to your time at UA? Tell us the tale - we love a good Zip love story!

Posted by The University of Akron on Friday, January 27, 2017