Even tarantulas get the blues

A front view of the critically endangered gooty sapphire ornamental tarantula (P. metallica) and its reflection. — Photos by Michael Kern/The Gardens of Eden

Most people think of tarantulas as big, hairy and drab-colored spiders; but many species showcase vibrant blue colors on their legs and bodies.

A team of researchers at The University of Akron and Scripps Institution of Oceanography at the University of California, San Diego discovered that many species of tarantulas have independently evolved the ability to make these blue colors using nanostructures in their exoskeletons, rather than pigments. The result is published in the Nov. 27 issue of Science Advances. 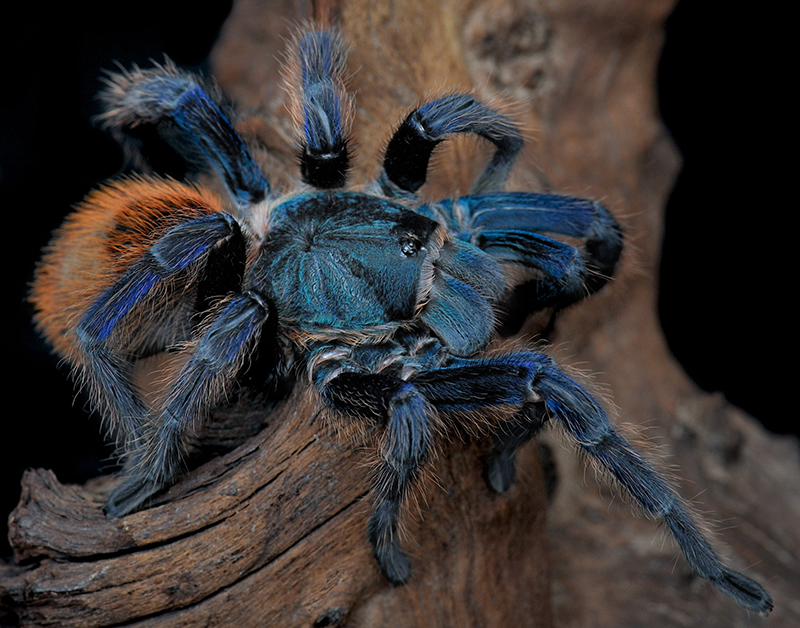 A greenbottle blue tarantula (C. cyaneopubescens) on a branch. Despite of its name, saturated, bright green color rarely occurs in tarantulas.

Several reasons exist in other species. For example, male butterflies and birds also use nanostructures to appear vibrantly colored, attracting the attention of females during courtship, and different species range from deep blues to greens depending on female preferences.

“However, tarantulas don’t see well, so their blue colors could not have evolved for courtship,” concludes Bor-Kai (Bill) Hsiung, a Biomimicry Fellow in UA’s Integrated Bioscience Ph.D. program and lead author on the study.

“Even more remarkably, different types of nanostructures all evolved to produce the same ‘blue’ across distant branches of the tarantula family tree. In other words, natural selection has led to convergent evolution,” remarks Hsiung.

While the researchers still don’t understand the benefits tarantulas receive from being blue, they are now investigating how to reproduce the tarantula nanostructures, by making color in the laboratory. Because tarantulas’ blues are not iridescent, meaning the color doesn’t change when viewed from different angles, these reproductions could be very useful.

“They could be used as pigment replacements in materials such as plastics, metal, textiles and paper, and for producing color for wide-angle viewing systems in phones, televisions and other optical devices,” says Hsiung.

The paper’s coauthors include Dimitri Deheyn of Scripps Oceanography, and Dr. Matthew Shawkey and Dr. Todd Blackledge of The University of Akron.