Turning Off the Sound of Silence 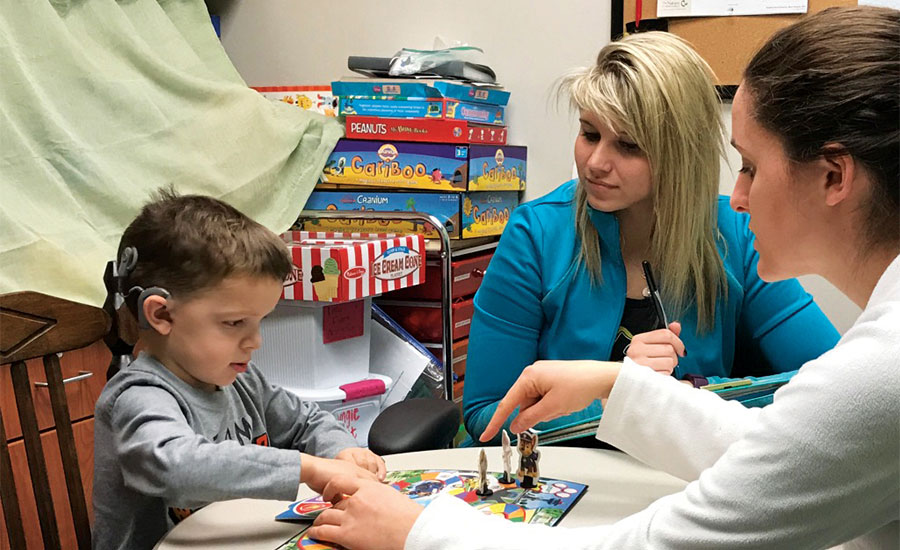 Cooper Ash is a typical 8-year-old boy. He’s into video games and sports. His mother, Brandy, thinks Cooper might be a professional baseball player someday; he’s already playing second base for a youth team.

If he makes it to the big leagues, Cooper—who was born with profound hearing loss in both ears—might be the first player to do so with bilateral cochlear implants.

And whether he plays professional baseball or ends up doing something else in life, The University of Akron’s School of Speech Language-Pathology and Audiology in the College of Health and Human Sciences will have played a role in getting him there.

Cooper Ash is one of hundreds of children in Northeast Ohio who have benefitted from a project co-directed by UA Professor K. Todd Houston and UA Assistant Professor Alex Meibos, who work in the School of Speech-Language Pathology and Audiology.

The two colleagues received a $1.25 million grant from the Office of Special Education and Rehabilitative Services at the U.S. Department of Education to train graduate students in the use of data, the latest scientific evidence and clinical experience to work with children who experience hearing loss.

The School of Speech Language-Pathology and Audiology has in the past 10 years received more than $2.4 million in support of graduate-level training of highly sought clinical professionals who can provide speech, language and hearing interventions for these kids.

About two or three of every 1,000 children in the U.S. are born with a detectable level of hearing loss in one or both ears, according to Houston.

“When early identification, early fitting of hearing technology and enrollment in family-centered early intervention occurs, most of these children can achieve speech and language outcomes that rival their hearing peers,” said Houston, who is also the director of the School’s Telepractice & eLearning Laboratory (TeLL).”

Houston and Meibos’ project, “Interprofessional-Hearing Early Access Response through Telepractice,” is designed to allow graduate students to collaborate with other professionals in the area through in-person, telepractice, and hybrid service delivery models.

Training stipends will be provided to students through the University to support approximately 40 graduate students during the five-year project duration. Houston and Meibos are also developing a certificate program.

Around 72 percent of Ohio counties do not have a dedicated early hearing detection and intervention center with specialized services. Houston and Meibos hope their project will put more trained workers into the state to work with children and families.

Currently, services are provided through the Cochlear Implant Program in the Ear, Nose and Throat Center at Akron Children’s Hospital, where Houston and UA graduate students have been providing speech language diagnostic and therapy services to children with hearing loss for the past seven years.

Sessions were conducted online during the pandemic

Cooper Ash is one of them.

He was diagnosed with bilateral profound sensorineural hearing loss—in other words, Cooper had little to no hearing in either ear—just weeks after he was born.

When his diagnosis was confirmed, Cooper’s mother, Brandy, immediately took action, researching and connecting with UA speech-language pathologists who started doing auditory-verbal therapy (AVT) with Cooper when he was less than three-months old. When he turned 1, Cooper had surgery to insert cochlear implants.

“Early intervention is a huge key to success for these kids,” she said. “The auditory nerve in your brain is like any other muscle in your body. If you don’t use it, you lose it. He was two-and-a-half-months old, propped up, doing Blackboard Collaboration with clinicians. The earlier you start, the more successful they’re going to be.”

Blackboard Collaboration is an online, interactive teaching and conferencing tool that allows participants to collaborate through audio, video, sharing and recording capabilities.

When Cooper was about 3 years old, he grew somewhat frustrated with the computer, so Brandy began driving him to Akron for therapy sessions with UA clinicians once a week.

He is now in second grade, and Brandy feels that even though he was born with hearing loss and was a year behind, Cooper’s speech is at the same level as or even ahead of other children his age.

“It’s because of early intervention, and because the clinicians were always good about doing what works for each child,” she said. “Even through all the telehealth and COVID, they always found a way to interact.”

Cooper recently started using a waterproof accessory for his cochlear implant processors and, for the first time, can get into a pool. He can now play Marco Polo, a game that is dependent on the participants being able to hear each other.

And if Cooper doesn’t quite make it to professional baseball, a tough road for any child, his mother has another idea.

“I would love to see Cooper become the next Dr. Houston and train a new generation of students,” Brandy said. “He has been a godsend to not just us, but to the community in general. The whole program has been a blessing for us. I don’t feel we’d have the same success if we hadn’t been working with The University of Akron.”