The University of Akron
Parking and Transportation Services

Looking for the campus shuttle? The free Roo Express and METRO Dash shuttles run the following routes during the fall and spring semesters.

The routes are described in detail below. Show your Zip Card and hop on board at any stop.

The shuttles may not operate or may have limited service on holidays or when the University is closed/delayed.

Parking Services welcomes your questions and comments: 330-972-7213 or rooexpress@uakron.edu On the WEEKDAY CIRCULATOR ROUTE, the shuttle makes eighteen stops:

1. At the Polsky Building on High Street

2. At the College of Business Administration on Broadway

3. At the College St. circle near Bierce Library

7. On Carroll Street near Buchtel Place

8. At Carroll Street and Annadale Ave.

9. At the James A. Rhodes Arena on Carroll Street

11. Near the intersection of Spicer St. and Power St.

12. Near the intersection of Allyn St. and Power St.

13. Near the intersection of Allyn St. and Thornton St.

14.  On Sherman St. near the intersection with Voris St.

15. On Sherman St. near the intersection with Thornton St.

16. At the intersection of Sherman St. and Wheeler St.

18. At the South Campus Parking Deck on Exchange St.

19. At the Student Union on Carroll St.

On the METRO DASH ROUTE, the shuttle makes 14 stops:

1. At the circle near College of Arts and Sciences.

2. At Quaker Square on Mill St.

3. On High St., before University Ave.

4. At the Polsky Building on S. High St.

7. At the RKP Metro RTA Transit Center off Broadway St.

8. At the intersection of W. Falor St and S. Main St., near Bounce Innovation Hub.

10. In front of The Depot apts. on South Broadway.

12. On S. Broadway St. near the Morley Health Center.

13. Outside the Quaker Square Residence Hall on S. Broadway St.

DASH shuttles do not require a fare or a Zip Card in order to ride. 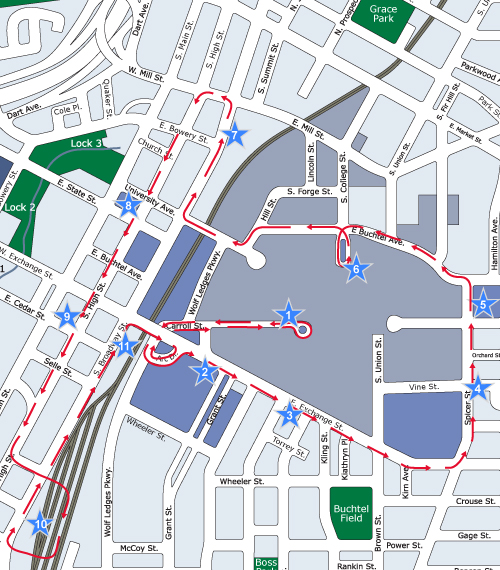 On the WEEKEND CIRCULATOR ROUTE, the shuttle makes eleven stops:

2.  In front of Starbucks on East Exchange St.

4.  Across from the Spicer Hall on Spicer Street.

5.  At the East Campus Parking Deck on Spicer St.

6.  At the College St. circle behind Bierce Library.

8.  At the Polsky building on High Street.

10.  *At the RKP Metro RTA Transit Center off Broadway St.

11.  In front of The Depot apts. on South Broadway St.

*The shuttle will bypass stop #11 after 7:30 p.m. on Sundays when the RKP Transit Center closes. 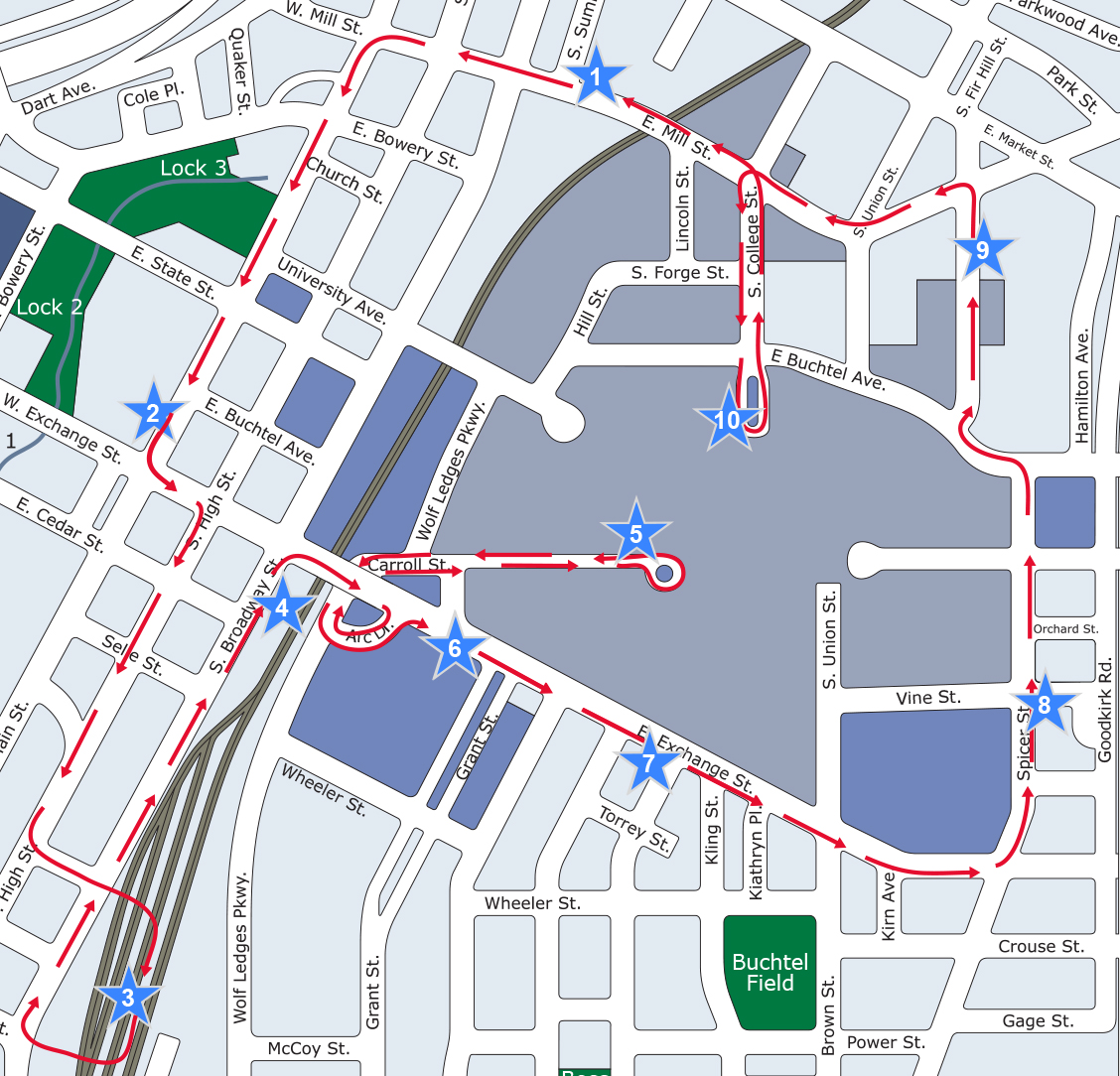 The shuttle only operates on holidays or inclement weather days during fall and spring semesters.

The shuttle will operate on this route from 10 a.m. to 6 p.m. for planned holidays. Pay attention to shuttle announcements within DoubleMap and UA Mobile during severe weather conditions, as times may be different.