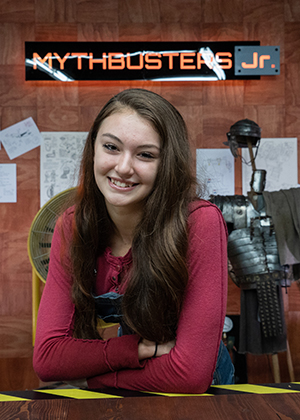 Rachel Pizzolato first caught the Akron Global Polymer Academy's (AGPA) attention in 2018 when she entered and won the Science & Engineering Division of their 10th annual Rubber Band Contest for Young Inventors. The 14-year-old STEM enthusiast from Metairie, Louisiana, used her STEM skills (and a rather iconic polymer) to create something that would help solve a real-world problem. Rachel designed and constructed an invention called “The Halo”, which utilized the unique properties of rubber bands to aid in the rehabilitation of injured wrists and hands in athletes and geriatric patients.

After the contest ended, Rachel and her father shared some other amazing and surprising news with the AGPA: Rachel was 1 of 6 students selected to star alongside Adam Savage in the Science Channel’s new hit series “Mythbusters Jr.”! So, for the Pizzolato's, The University of Akron’s Rubber Band Contest was just the beginning of what would become an exciting STEM-filled summer - highlighted by a trip to L.A. in order to film the “Mythbusters” spin-off. 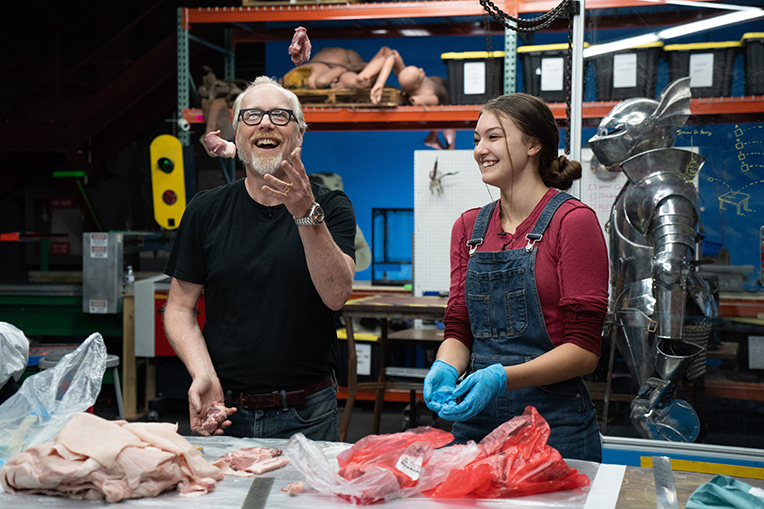 “Mythbusters Jr.” is a 10-episode series that places a spotlight on Rachel and her 5 co-stars as they showcase their STEAM (Science, Technology, Engineering, Art, and Mathematics) skills and problem-solving abilities. And just like the original “Mythbusters” show, each episode follows the students as they attempt to prove or disprove different myths involving topics like: chemistry, explosives, physics, polymers, biology, pop-culture, vehicles, and more. Adam Savage, a former co-host of the original “Mythbusters” television series, takes a role as the host and executive producer of this exciting new series.

Filmed in Los Angeles over the summer, the show debuted January 2nd, on Discovery’s Science Channel. Episodes can be viewed on the Science Channel or online at: https://www.sciencechannel.com/tv-shows/mythbusters-jr/.

Rachel was able to take some time to catch up with the Akron Global Polymer Academy and filmed a short video interview from her home in Louisiana. In it, she shares her thoughts on a variety of topics ranging from: how The University of Akron's Rubber Band Contest helped cultivate her love for STEM to what being a Mythbuster and working with Adam Savage was like. Rachel also explains why she wants to encourage students to dream BIG and inspire them to get into STEM.


In hopes of encouraging other young learners, Rachel invites students to reach out to her with any questions they might have. (see below for Rachel’s social media information) 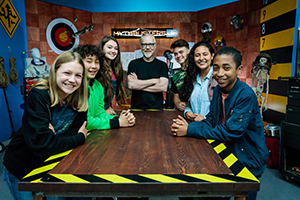 The University of Akron (UA) also has another connection to “Mythbusters Jr.”, as UA’s own Dr. Todd Blackledge—a professor of biology at UA—appears on an episode titled “Bug Special”. In that installment, Adam Savage and the jr. Mythbusters work with Dr. Blackledge to try and find out if spider silk is stronger than steel! In order to collect enough silk for the show, a silk reeling device was custom-made by Dr. Blackledge and his students in the Polymer Science Machine Shop, which is located in the College of Polymer Science and Polymer Engineering (home to the AGPA’s K-12 outreach group). Read more about Dr. Blackledge and his appearance on “Mythbusters Jr.” here.

To learn more about the College of Polymer Science and Polymer Engineering and its STEM outreach programs, visit: uakron.edu/polymer/outreach/.

Students can follow and connect with Rachel Pizzolato in a few ways: