The University of Akron
Office of the President
About Dr. Miller Messages Strategic plan Multimedia Contact

On Thursday, June 25, the Akron-AAUP sent to the Administration a draft of a “position paper” that outlines the union’s view that additional reductions are needed in University financial support of athletics. The union gave the Administration an opportunity to “…review (the position paper) for any factual misstatements.” The Administration provided comments and factual corrections by the union’s June 29 deadline. While the union made some changes from their original draft, significant portions were either ignored or important context was left out. (Download the Akron-AAUP position paper.) The University’s updated response and important context are below.

AAUP statement: “As part of their effort to address a budget shortfall of $65M, the University of Akron Administration has asked colleges to propose FY21 budgets with cuts ranging from 18% to 35%. As wages and benefits are the major portion of the academic budget, we anticipate significant faculty reductions.”

Administration response: Recognizing the significantly reduced revenue projections for the coming year, which were made all the more severe by the COVID-19 pandemic, the provost established a budgeting process focused on functional areas of expenditures to assess the relative investment in areas such as instruction, auxiliaries (including athletics), the physical plant, student services and various administrative costs. A thriving university requires a balance of support across all of these functional areas. Over-investment in one area will lead to an unsustainable operation over time by starving other critical functions within the university.

The University Council’s Budget and Finance Committee, which includes many accomplished faculty, conducted a benchmarking of our expenditures in these functional areas compared to selected peer institutions. This committee’s data shows an over-investment in instruction, separated budgeted research, scholarship/fellowship support and depreciation. All other areas including auxiliaries, administrative costs, student services and public service were funded at levels below our peers. Clearly, this committee’s data does not align with AAUP’s conclusion on the relative expenditures for faculty (instruction, separately budget research) vis-a-vis athletics (auxiliaries).

These recommendations were utilized to develop a differentiated and strategic approach to resetting the budget in a manner that brings these functional expenditures into alignment with appropriate peer institutions. Deans and vice presidents were given initial target expenditure reduction numbers/percentages for budget planning purposes. The median target budget expenditure reduction was 20%, with reductions are being met in a manner that assures our ongoing commitment to the student experience including not only educational and scholarly excellence, but other vital components of the university such as athletics, student services and public service. A 20% budget reduction will not require a 25% reduction in personnel. Recommendations from the vice presidents, deans and chairs for reductions in expenditures (both operating and personnel) are still being finalized and are under discussion with various collective bargaining units.

AAUP statement: “For years, faculty, regional news media, the community and students have asked why UA continues to compete in Division I Mid-American Conference (MAC).

Both responses have been unaccompanied by any actual evidence. In contrast, even sports commentators wonder why MAC schools—especially UA—do not drop out of Division I football.”

Administration response: The University consists of many different programs, activities, services and opportunities for students to learn and grow, including athletics. The University has not claimed that having athletics is the sole reason why a student would choose UA, although some are, indeed, attracted by the opportunity to compete at the Division I level, as evidenced by the 160 student-athletes (30% of the total) who do not receive an athletic scholarship. UA competes for students among schools similar to itself.  Importantly, approximately 80% of students accepted to UA who go elsewhere go to NCAA Division I universities. 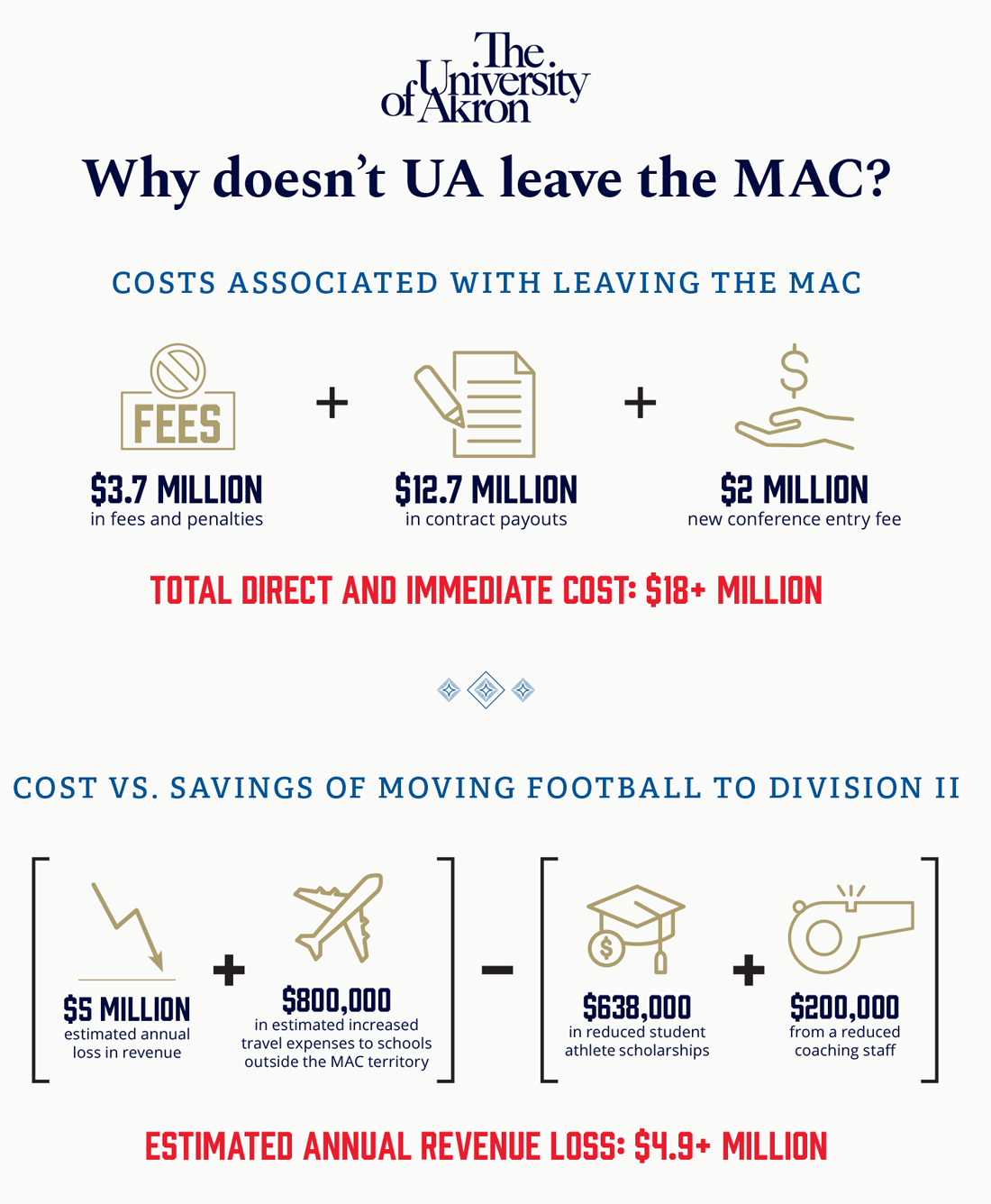 It is not possible for a member of the Mid-American Conference (MAC) to drop to Division II football and remain in the MAC to compete at the Division I level in other sports. The MAC requires member schools to offer Division I Football Bowl Subdivision (FBS) football as a condition of membership.

In exiting the MAC [as would be required if UA did not compete in the NCAA Division I Football Bowl Subdivision (FBS)], the University would face costs in excess of $18 million in required cash payouts and the payment of an entrance fee to a new conference. Annual revenue loss would be nearly $5 million.

Any financial savings that might be achieved by moving to a non-Division I FBS level (estimated $638,000 in reduced scholarships and $200,000 from a reduced coaching staff) would be offset by estimated increased travel expenses ($800,000) associated with having to fly to more distant locations than in the relatively compact MAC geographic territory. The almost $5 million in lost revenue would be an additional financial burden to the University.

AAUP statement: “Between 2010 and 2019, total expenditures at UA dropped by 13.6% ($395M to $341M). The number of Bargaining Unit Faculty (-18.5%) decreased by significantly more across these years (and this does not include the 49 positions lost to voluntary buyouts since fall 2019). Instructional and department research expenditures were up 4.2%, but direct institutional subsidies for athletics increased by 59% (from $16.4M to $26M).”

It also should be noted that expenditures for Institutional Support (administrative overhead) declined by 26.9% during the same time period.

AAUP statement: “UA has been resistant to cutting athletic spending – indeed, the just-announced cuts of $4.4M in allocations from the general fund to athletics is the first cut to the athletics’ budget in years. This is only a 12% cut to the total 2019 athletics’ budget ($37.28M) and a 17% cut of the 2019 allocation from the university ($26M). It is not nearly enough when the University is considering a 25% reduction in the academic budget.”

The AAUP refers to a “total 2019 athletics budget ($37.28M).” This reference appears to be a number taken from the FY2019 “NCAA Revenues and Expenses Reporting” submission. That report includes not only University-provided financial support to athletics operations but also payments from other sources. In FY19, the NCAA and the MAC distributed $2,933,332 to UA and payments for guarantee football games of $3,366,000 were received, totaling just under $6.3 million.

The 2019 NCAA Report’s expenditures (referenced by the AAUP) totaled $37.275 million while the University’s budgeted Athletic account expenditures totaled $35.5 million. (The NCAA Report incorporates a slightly broader perspective of expenditures.)  Nonetheless, both the NCAA Report and the University’s budgeted Athletic accounts included University support approximating $26 million for that year. Athletic scholarships for student-athletes of $6.5 million are included, as is approximately $5 million in debt service for both InfoCision Stadium and the Stile Fieldhouse. This is a University responsibility, as is the debt that is carried throughout other areas of the University resulting from the renovation of the campus in the 2000s.

Similar to several of the University’s other auxiliaries (the Jean Hower Taber Student Union, Recreation and Wellness Center, and E.J. Thomas Performing Arts Hall) – all of which receive University support – the University held those units harmless for their respective debt service and is working diligently to reduce the level of University-provided support for those operations.

AAUP statement: “Donor contributions, often cited as a reason to keep Division I athletics, only amount to $1.87M.”

Administration response: The AAUP does not cite a year for this statement, but the statement is incorrect.