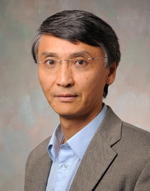 Fellow of the American Physical Society (1997)

Fellow of American Association for the Advancement of Science (2014)

Curiosity is a fountain of happiness.
Since we are curious, every day is a holiday.

Polymer Physics channel has been created on YouTube, which hosts over 40 lectures on various aspects of polymer rheology and mechanics.

Physics and engineering of polymeric and polymer-based materials including sustainable polymers such as PLA and PHA.  Phenomenological and conceptual foundations of polymer melt rheology and molecular mechanics of polymers in solid state, either glassy or semicrystalline or "both" (i.e., semicrystalline polymers below the glass transition temperature).  Exploration of the relationship between processing, structure and mechanical properties of all polymeric materials.

Our current research involves three episodes in the saga to develop a unified framework for mechanical characteristics of polymers in both liquid and solid states: rheology of polymeric liquids, molecular mechanics of glassy and semicrystalline polymers and fracture behavior of plastics and elastomers.  Several hundred billion pounds of polymers are annually consumed thanks to their adequate mechanical characteristics.  Thus, better understanding of mechanical performance of polymers is a core subject in polymer science and engineering.  Our understanding of Nonlinear Polymer Rheology (Wiley, 2018) provides us valuable insights into when and how glassy and semicrystalline polymers gain ductility and resist fracture in solid state.

Brittle fracture of polymers is typically described using linear-elastic fracture mechanics.  The practice is predicated on the assertion that Griffith style energy balance argument applies.  On the other hand, there is no conceptual difficulty to imagine sudden fracture without invoking any structural inhomogeneity: failure of load-bearing strands can occur sequentially, one strand at a time.  In tensile extension, all loading elements are in series, permitting strain localization in the form of brittle fracture.  Equipped with the understanding of the nature of brittle-ductile transition in glassy polymers (see Episode 2a below), we show that toughness of polymers including plastics and elastomers may be controlled by the inherent strength.  This realization can be expected to simulate theoretical modeling to correlate mechanical strength with underlying chain network structure.  The first efforts to examine the origin of fracture of glassy polymers have been recently described in arXiv.

Episode 2b: Brittle vs. Ductile Characteristics of Semicrystalline Polymers

Semicrystalline polymers can be conveniently classified into two groups depending on whether their glass transition temperature is above or below room temperature.  According to this classification, polymers such as polyethylene and polypropylene belongs to class A and polyesters such as PET and poly(lactic acid) belong to class B.  It is often noted that class B semicrystalline polymers (SCPs) are brittle (at room temperature) in presence of saturated crystallization while their counterparts, i.e., the same polymers in their amorphous glassy state can be ductile.  Our current efforts are directed to develop a basic molecular-level understanding of mechanical behavior of semicrystalline polymers so that tough semicrystalline polymers can be manufactured without invoking any chemical changes.  To establish a realistic model for mechanics of SCPs, it is indispensable for us to have a thorough understanding of the other two subjects listed below as 1. Nonlinear melt rheology and 2a. Molecular mechanics of glassy polymers.  Subjects 1 and 2a allow us to develop processing-structure-property relationship so that class B SCPs can be made super ductile, optically clear and heat-resistant, as shown in a recent example - Soft Matter, 2021,17, 1457-1462.

Recently we have come to realize how we should think about behavior of glassy polymers.  It has been a very difficult, outstanding challenge to gain some molecular level understanding of yielding and failure behavior of polymer glasses under large deformation.  For many polymer glasses with Tg well above room temperature, why are some brittle and others ductile?  If it is a matter of entanglement density, why do these polymers turn from ductile to brittle upon cooling to a lower temperature, and vice versa?  Ultimately, can we answer why polystyrene is the most brittle (typically still brittle at 80 ℃) and bisphenol A polycarbonate is most ductile (known to be ductile at -110 ℃) among all known polymer glasses?

It turns out that a crucial clue comes from the observation that all non-polymeric organic glasses are brittle.  There arises the natural question of why polymeric glasses can be ductile at all?  Being polymeric is the key.  We have formulated a molecular model [ J. Chem. Phys. 141, 094905 (2014); Polymer 197, 122445 (2020)] for yielding, crazing and brittle-ductile transition.  In the zeroth-order picture, polymer glasses are structural hybrids, made of a primary structure due to short-ranged inter-segmental attractions (causing vitrification) and long-ranged chain networking that can be extended to allow buildup of chain tension, plausibly corresponding to bond length and angle deviations from the equilibrium values.  A polymer glass gains global plasticity and is ductile at a given temperature if its chain network can activate the glassy state globally.  Conversely, if the chain network breaks down before it "finishes its job", a polymer glass is going to undergo brittle fracture.  Here the chain network is envisioned in terms of junctions formed by at least two pairs of hairpins from different chains.

Many of these polymers, such as polyethylene and polybutadiene, are well entangled liquids above melting and glass transition temperatures. The research in the past decade has informed us that well entangled polymers, as highly viscoelastic liquids, behave as transient solids and undergo cohesive breakdown upon either startup deformation or large step strain or large amplitude oscillatory, A new worldview has emerged [J. Chem. Phys. 127,064903 (2007)].  The localized yielding phenomenon leads to strain localization such as shear banding and non-quiescent relaxation.  A new worldview has emerged, in which we have developed a unified treatment of deformation and flow in both shear and extension.  About sixty papers have been published on this subject in the past decade from our lab, and a list of these publications is provided here, including this manuscript that was rejected for publication on why EDT must exist regardless of any experimental difficulty, i.e., independent of any edge effects as well as a further response surrounding the "controversy" of when shear banding takes place.

A one hour seminar is available at both YouTube and Youku, summarizing what we know now after six years of intense studies (between 2006 and 2012), which was given at the University of Akron on March 2, 2012. To help us understand the difference between the new worldview and standard paradigm due to the tube model, we have made a short (9 min) presentation to highlight the need to address the issue of causality: a) where affine deformation comes from and b) when chain deformation ceases to increase.

Much of the growing phenomenology has been recorded as video clips.  Our book on Nonlinear Polymer Rheology has an accompanying website where these videos can be accessed here.

Lectures based on the book have been recorded and made available here.