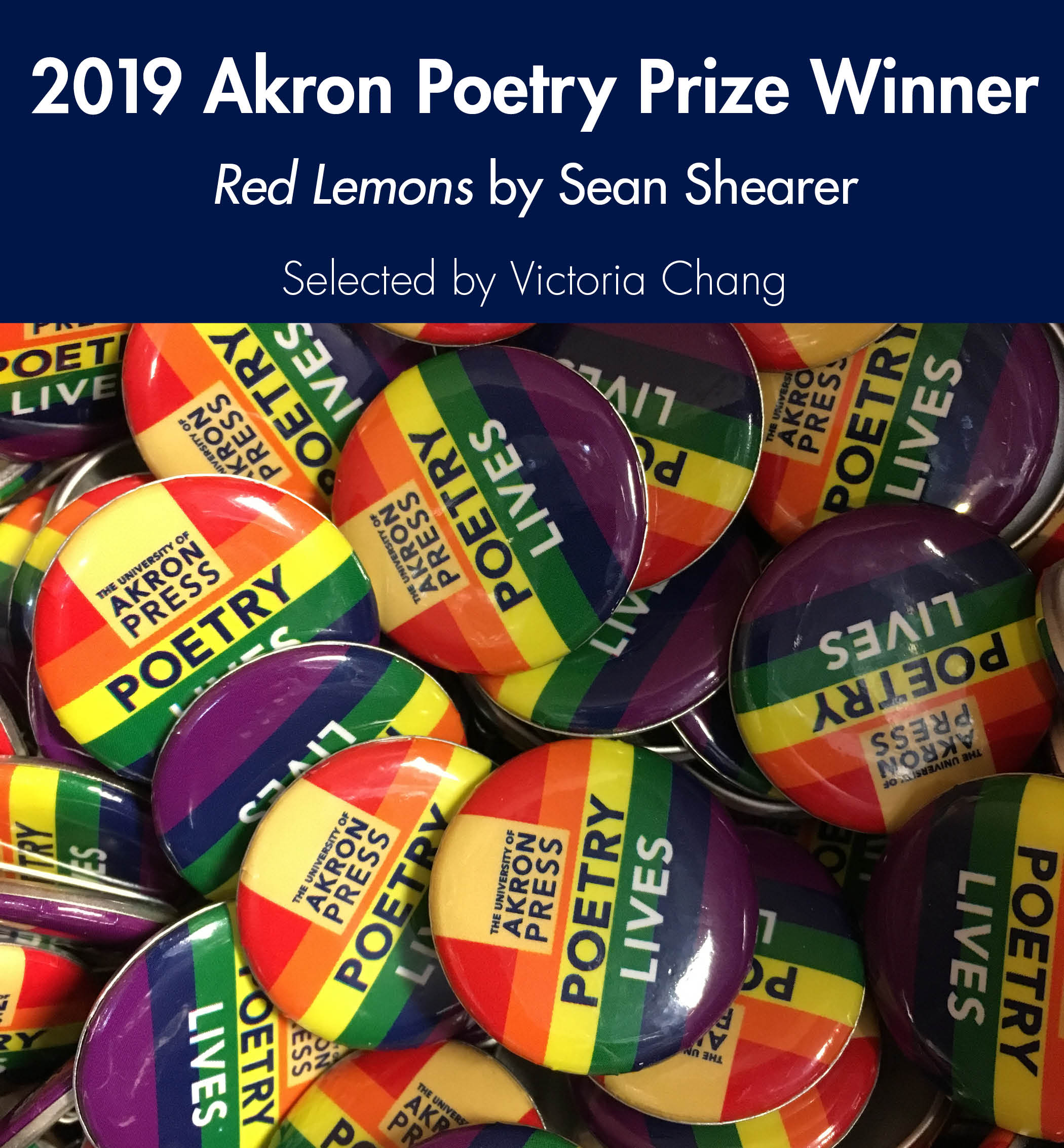 Victoria Chang, this year’s judge, has chosen Red Lemons by Sean Shearer of Charlottesville, Virginia as the 2019 Akron Poetry Prize winner. The contest received a total of 623 entries in 2019.

Red Lemons is a moving debut collection about addiction and loss told through both a narrative and surreal lens, swaying from logic to absurdity, grimness to beauty. In these poems there is a “war with self” tethered to both the narrative and lyric, often playing with scope and leaps that fall between the threshold of order and chaos—a style of gentle reserve and wild transparency—Red Lemons is poised with brutal imagination, where nightmares “wait beyond the night / in a pitch we cannot hear, / like a still pond and all its eaten.”

About the winning manuscript, Chang comments:

Red Lemons is a gorgeous, lyrical, and painful book of poems.  This collection deals with the difficult subject matter of addiction, but there's so much beauty in the language that in some moments, I was so caught up in the unusual phrasings and imagery, that I forgot where I was or what I was reading about.  This is the best gift of poetry--to be transported by language that allows the reader to see something in a new way, to be lifted and alight.  In this book, "teeth are daffodils," death drags "his briefcase," an evening "cuts like childhood," there's a yearning in the speaker to "be simple like copper pipes," and I could go on and on but I don't want to spoil the surprise of this stunning and spare collection for the reader.  Ultimately, this is a book that stands right on the edge of cruelty and beauty, facing a newfound world with the memory of addiction and pain shearing across the sky.

Sean Shearer grew up in New Jersey. He earned an MFA in Poetry from the University of Virginia, where he was a Poe/Faulkner Fellow. Honors include a 2020 Pushcart Prize and a fellowship from the Vermont Studio Center. His poems have been published in Beloit Poetry Journal, Boulevard, Copper Nickel, jubilat, New England Review, and elsewhere. Sean is the founder and editor of BOAAT Press. Full publication and contact information is available at www.iamseanshearer.com.

The judge for the 2020 collection will be Philip Metres. Philip Metres has written ten books, including Sand Opera (2015), Pictures at an Exhibition (2016), and The Sound of Listening: Poetry as Refuge and Resistance (2018), and the forthcoming Shrapnel Maps (2020). Awarded the Lannan Fellowship and two Arab American Book Awards, he is professor of English and director of the Peace, Justice, and Human Rights program at John Carroll University.

Full guidelines may be found here.

(Note: several of these finalist manuscripts were accepted elsewhere and withdrawn after being sent to the final judge)

No Other Rome by Heather Green

Explain this Corpse by Kirsten Kaschock

Every Last Thing by Alyse Knorr

The Many Deaths of Inocencio Rodriguez by Iliana Rocha (W)

The Man Grave by Christopher Salerno

eat the dream by Katie Schmid

The Silk the Moths Ignore by Bronwen Tate

Once Was Eternal by Lena Khalaf Tuffaha

The Knives We Need by Nava EtShalom

Wound from the Mouth of a Wound by torrin a. greathouse

How to Be Better by Being Worse by Justin Jannise

Masters and Lovers by Mona Kareem

The Ordinaries by Anna Leahy

The Naomi Letters by Rachel Mennies

Stage Weapons and Other Dramatic Objects by Matthew Minicucci

Along the Road Everyone Must Travel by Danielle Pafunda

Sonnets with Carpenter and Dirty Snow by Robert Thomas