Research in my group involves the development of new NMR techniques, applications of computers/networking/data processing in NMR spectroscopy, and novel applications of modern, multidimensional and multiple resonance NMR methods to problem solving in polymer, inorganic, organic and biological chemistry. A special emphasis is place on the development and use of NMR methods for the characterization of the three-dimensional structures of synthetic macromolecules. While there is an opportunity to do synthetic chemistry, emphasis is placed on collaborative interactions, so group members can focus on mastering the many NMR methods available for problem solving. Extensive collaborative interactions exist with a number of synthetic polymer, inorganic, organic and biological chemists who prepare and provide many interesting materials for study.

Ordered polymers have become extremely important in recent years. The order in liquid crystalline polymers imparts important properties on the materials where they form, including strength, anisotropic optical and mechanical properties, and desirable processing properties. Dendrimers and other nanostructures also are of considerable interest, and promise to provide molecular scale devices for many future applications. Recent work on the preparation, characterization and use of these materials requires good analytical methods for the determination of their three-dimensional structures. NMR methods have contributed significantly to our understanding of the three-dimensional structures and functions of biological macromolecules. However, applications of these methods to the study of synthetic macromolecules have been rare. In our group, we have established a new research area by developing a suite of multidimensional NMR techniques for studying the structures of synthetic macromolecules. These methods involve the use of the latest advances in NMR, including multiple resonance, pulsed field gradient spectroscopy, shaped pulses and advanced data processing techniques. The methods are being used to study the structures of liquid crystalline polymers, star-branched polymers, dendrimers, and other nanostructures of scientific and commercial importance.

Solution state multidimensional NMR, triple resonance NMR and selective excitation are being used to study a variety of problems involving fluoropolymer structure and reactivity. We are especially interested in studying Krytox® Fluoropolymers (used as a lubricant in advanced applications such as in computer disk-head/storage medium interface); Tedlar® fluoropolymer (used as protective coatings  in architectural applications); Nafion® fluoropolymer (used as membranes in electrolytic and fuel cells); and Teflon®-AF fluoropolymets (used as dielectrics in semiconductor applications).  Some problems in fluoropolymer chemistry require a detailed knowledge of the structures of chain defects, block junctions, or chain ends. NMR techniques being developed in my group have been combined with advanced methods for selective excitation, to solve previously intractable problems. Chain-end structures provide a knowledge of the initiation and termination processes in polymer chemistry, and in some cases, can give us information about the relative stabilities of different materials. A knowledge of the number and structure of defects in a polymer chain provide information that is correlated with the polymer's properties and can lead to syntheses of materials with better properties and performance.

In another area, we are doing NMR work in support of a major interdisciplinary project to develop silver drugs for treatment of bacterial infections. Work on this project is in collaboration with synthetic chemists, biologist, mathematicians and engineers in four departments on our campus and scientists and clinicians at six other institutions. This ambitious project involves all aspect of developing and testing drugs and drug delivery systems, and developing a complete understanding of the mode of action for use of silver in treating drug resistant strain of bacteria responsible for respiratory tract infections. Our part of the project involves all aspect of using advanced NMR methods to characterize the drug structures, to investigate all aspects of drug-nanoparticle formation and interactions, and to study the migration of drug and drug-nanoparticle complexes in models for biological interface. The last aspect of the study will provide experimental data for collaborators who do mathematical modeling of drug transport.

A number of other projects are available which use both solution and solid state NMR methods to study problems in inorganic, organic, pharmaceutical and polymer chemistry. Among these projects are a multidisciplinary, multi-institution project to identify natural product components in fruits (black raspberries in particular) which are biologically active against cancer of the digestive tract. Some of these are represented by the publications listed below. 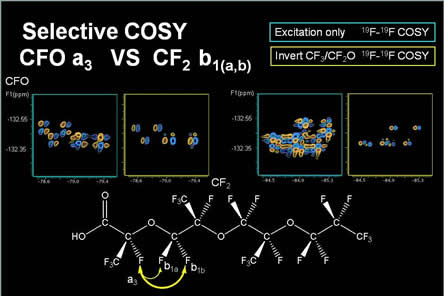 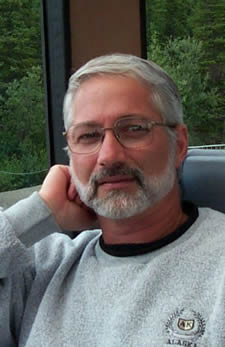