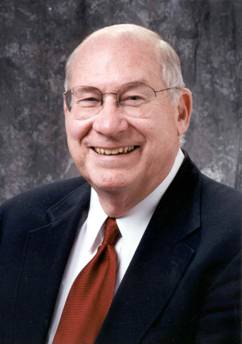 Dr. Frank Kelley, Dean Emeritus, College of Polymer Science and Polymer Engineering, provided 28 years of leadership at The University of Akron. While he is bound to be recognized for generations to come as the great leader and visionary who took the College of Polymer Science and Polymer Engineering from its inception to one of the top polymer programs in the country, he will, more importantly, be remembered as a friend and colleague to many.

Dr. Kelley earned three degrees at The University of Akron – a B.S. in chemistry (1958), an M.S. (1959) and a PhD (1961) in polymer chemistry. Upon retirement the University also awarded him a Doctor of Humane Letters, honorary degree. While attending the UA, he worked at The Goodyear Tire & Rubber Company and later at the Institute of Polymer Science. After graduating, he was employed by the Union Carbide Corporation until entering active duty with the United States Air Force.

He was assigned to the Air Force Rocket Propulsion Laboratory at Edwards Air Force Base in California, where he conducted research and managed technical programs on solid-propellant mechanical properties. Dr. Kelley remained at the laboratory as a civilian after completing his tour. In 1966, he was named chief of propellant development, chief of advanced plans in 1970 and chief scientist in 1971.

In 1973, he transferred to the position of chief scientist of the Air Force Materials Laboratory at Wright-Patterson Air Force Base in Ohio, and in 1976 was named Director of the Laboratory. Two years later, he returned to his alma mater as a professor and director of the Institute of Polymer Science. He was appointed dean when the College of Polymer Science and Polymer Engineering was formed in 1988. An active consultant, Dr. Kelley’s publications have focused on the relationship of molecular structure to mechanical properties of polymeric materials. He has received the Air Force Commendation Medal, the Civilian Meritorious Service Medal in 1967 and 1978, and the Exceptional Civilian Service Award from the Secretary of the Air Force. Academic awards include outstanding alumni awards from UA, the Buchtel College of Arts and Sciences, and the Department of Polymer Science. National level awards include the ACS Paul Flory Polymer Education Award, the ACS Rubber Division’s Whitby Award and the SPE Plastics Education Award. He is a Fellow of the ACS Polymer Division.