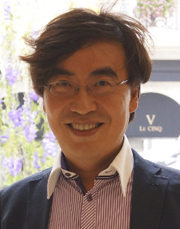 Dr. Chi Wang received his B.S. degree in 1984 and M.S. degree in 1986, both in the Department of Chemical Engineering from the National Taiwan University in Taiwan. His master thesis was “Simulation and processingmechanical property relationship in injection molding of polypropylene” under Professor Wen Y. Chiu. After finishing two years of military service as an artillery second lieutenant, he came to the U.S. in 1988 to pursue his doctoral degree in the Department of Polymer Engineering at The University of Akron, where he worked under Professor Thein Kyu for the first year and then under Professor Alan N. Gent for three years. Advised by two polymer mentors, Wang learned the fundamentals of scattering technique and solid mechanics, respectively. After completing his Ph.D. dissertation “Fracture mechanics of model fiber composites” in 1992, he stayed one more year with Dr. Gent as a post-doctoral researcher and worked on the tear strength of rubbers.

From 2008 to 2013, Wang served as the chair of UA’s alumni group in Taiwan. In 2014, Wang received the Tsai-Teh Lai professor award from the Taiwan Institute of Chemical Engineers for his contribution in electrospinning field. Wang was a visiting professor at Institut Charles Sadron, Strasbourg (2007) and at MIT Chemical Engineering, Cambridge (2012). Wang has been a long-term consultant for Taiwan Textile Research Institute (TTRI) and Industrial Technology Research Institute (ITRI).