In addition to the academic benefits of the program, students noted afterward that they appreciated the chance to explore cultural differences and similarities. 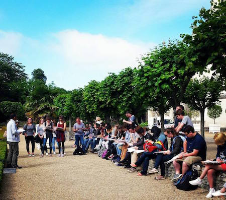 UA students and faculty are traveling to Le Mans, France this summer for a four-week experiential learning program in Humanities and French history. In this cost-effective program, students can take up to seven credits—with accommodations included. Read what participants from previous trips said about their time studying in Europe and find out how to apply this year:

Students from the University of Akron arrived in Le Mans, France in early June for a study abroad program at UA’s partner institution, the Université du Maine. Led by faculty from the Department of History and the Department of Modern Languages, students participating in the université d’été (summer university) had the opportunity to take general education courses, such as Humanities 210 and 221, and a special topics course in French history. UA students learned alongside their French counterparts, attending lectures together, completing collaborative projects, and traveling to sites of historical importance.

For students enrolled in the upper-division class on French history, learning moved between the classroom and the field, as the course included visits to medieval castles and cathedrals and to an archaeological dig in the ancient town of Allones. Additionally, all students had the opportunity to visit significant historical sites such as the famed abbey of Mont Saint-Michel, the Beaches of Normandy, and the Palace of Versailles. Students from both countries pointed to visits to Normandy, site of the D-Day invasion, and the famous Versailles as highlights of the program’s experiential component.

History faculty member Dionna Richardson-Duncan believes that studying history in the field allowed students to take greater ownership of their learning. Richardson-Duncan explained that when lecturing in Akron about how the Palace of Versailles helped display the power of the French monarchy to its subjects, she selects and displays images of the site that help reinforce this idea for her students. Speaking of students in the université d’été, she added, “When they are in the field, they get to see, smell, feel, and take in the entire environment—the importance of this really cannot be understated.” Following their visit to the palace, students wrote essays about Versailles as a symbol of power using evidence such as photographs and notes that they took while exploring the site.

In addition to the academic benefits of the program, students noted afterward that they appreciated the chance to explore cultural differences and similarities. Living together for five weeks in the city of Le Mans, students developed a sense of camaraderie while experiencing numerous aspects of Le Mans’ urban life, from the excitement of the city’s annual twenty-four hour car race to the more commonplace activity of cooking meals in shared kitchens. Many students expressed a sense of optimism that these experiences would lead to lifelong friendships and openness to future intercultural cooperation.