‘Trouble was all I knew’: Chris Rivero’s remarkable path to practicing law

As part of The University of Akron’s sesquicentennial celebration — honoring 150 years of our people, place and promises — we are hosting a “Celebration of Academic Excellence” to highlight the history and future of our colleges, schools and academic disciplines.

Today we continue to honor the achievements of the School of Law.

After five years devoted to honing his criminal defense skills as an assistant public defender in the Legal Defenders Office of Summit County while also maintaining a part-time private practice, University of Akron School of Law graduate Christopher Rivero ’15, went all in with Esparza Rivero Law, LLC, in September 2020. There is nothing exceptional about that. It’s how he got here that is remarkable. 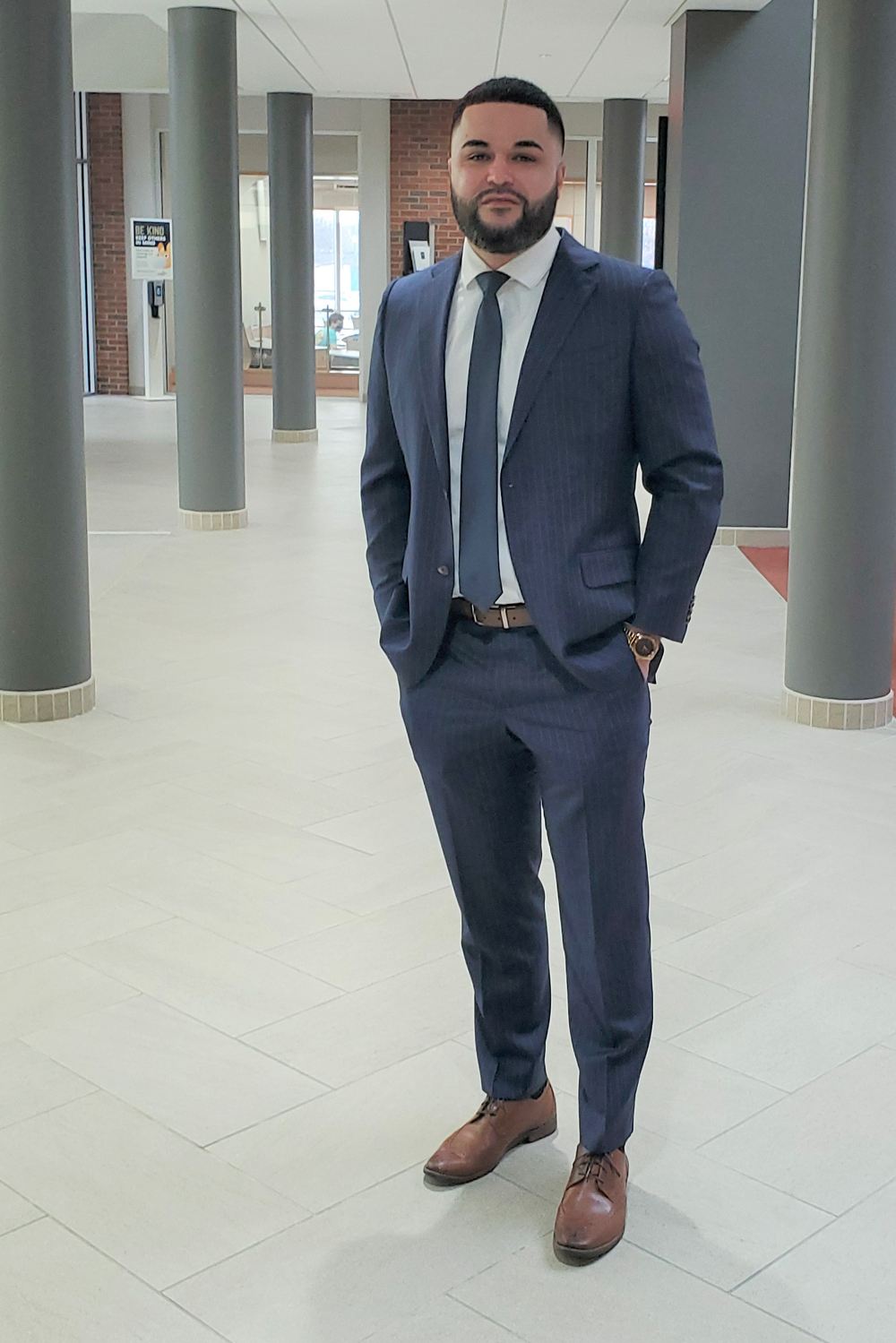 At age 11, Rivero was homeless and hungry, often sleeping in a neighborhood baseball field dugout. His mother had abandoned him after falling prey to alcoholism, and he had lost contact with his father. In a gesture of kindness, a friend’s single mother took him in for a time, but he still got in trouble.

“Trouble was all I knew,” he related in a first-person story published recently.

“In school, I got expelled from eighth grade because I frequently got into fights,” he said in the story. “Violent and regularly involved in criminal activity, at 12 years old, I assumed I’d ultimately end up in prison just like many other members of my family.”

But then more small miracles followed, in the form of a high school football coach, another friend’s family, his estranged father, and an uncle he had never seen much.

Rivero would experience more setbacks and small miracles along the way to graduating with a B.A in communications and minors in political science and foreign affairs. But getting into college put him on the path to success.

Read Chris Rivero’s first-person story of his youth on TheUnsealed.com

During his junior year at John Carroll, Rivero’s academic advisor got him to sign up with the career center. A career aptitude test identified him as an extrovert who would be good at sales. That wasn’t his first choice: He wanted to be a lawyer.

But he knew that dream had to be deferred.

“I was tired of being broke. I had all these student loans, and my family was poor and struggling. So, when I got a job offer from Sherwin-Williams to be in their management training program, I considered it really incredible.”

Rivero worked at Sherwin-Williams for just over five years.

“I moved up pretty quickly. I went from being an assistant manager to the manager of the Shaker Heights store within six months. I was making some money, and Sherwin-Williams is a good company. I thought maybe I could do well there.

“Then, on New Year’s Eve 2010, I was assaulted by the police while I was out with a group of friends in downtown Cleveland. Then it happened again, for seemingly no reason. That kind of was my wake-up call. It was like a higher power telling me it was time to get on the path that you were always meant to be on. Within a year, I started studying for the LSAT. After I got accepted, I gave my notice at Sherwin-Williams but stayed on part-time while I went to law school.”

“It was a real grind, going part-time at night and working part-time. The first class I took – Contracts – was probably the worst subject for me to start with. It was just not my forte,” he said. “But Professor (Willa) Gibson was very understanding. She has such an open-door policy about meeting with students. She really helped me – not just in Contracts, but in terms of understanding law school exams and what the professors are looking for.”

“Chris was a very engaging student, who also exhibited curiosity about, and zeal for the law,” she said. “I remember him sitting in a back row to the side by himself just absorbing my words and those of his classmates. I could tell he wanted to excel, and I knew he would be successful. You could tell he was focused. And he was such a good person. He cared about people. You could see it in his eyes and in his demeanor.”

Another instructor who made an impact was his constitutional law professor, Wilson (Will) Huhn, now distinguished professor of law, emeritus.

“Law school didn't always translate into practicing law for me,” Rivero said. “But Professor Huhn just has a gift for conveying information in a way you really understand it. I still hear his voice in my head today when I'm thinking about constitutional issues.”

Rivero’s law school struggles went beyond the classroom. He lost his grandfather during the first year of law school and his grandmother the second year. His mother died during his third year.

“I got the call that my mother only had days to live the night before my Con Law exam. I thought about going to Professor Huhn, but I decided I was going to push through this. I took the exam and flew home to Tampa the next day to be with my mom for her final days.” 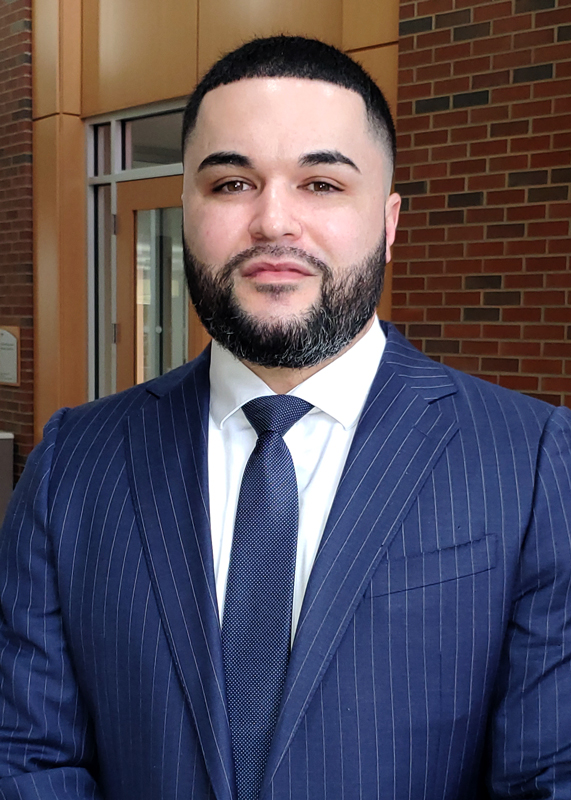 Rivero switched to full-time status after two semesters and finished up his degree in three and a half years. During that time, he had an internship with the Summit County Legal Defender Office. After passing the bar on the second try, he went back to the defender’s office and was hired. In the interim he picked up some immigration law experience working as a paralegal at Margaret Wong & Associates while he studied for the second bar exam.

The defender’s office was a good fit. Not only did he have the opportunity to work under Joe Kodish, the recently retired long-time director and “an incredible guy,” but he also benefited from the private-practice policy then in place.

“I was able to get that public defender experience, which is so valuable for a trial attorney, and also handle private cases outside of Summit County to build my experience, my reputation, and a small practice,” Rivero said.

“It was scary to go out on my own when I’d always had the security of the public defender salary. But it’s been absolutely incredible. You do a good job for a few people, and you communicate with clients, even if it's communicating bad news, and they really appreciate it. My goal is definitely to grow, but I’m keeping it solo for now.”

Back in September, Rivero expected most of his work would be in criminal defense, but that hasn’t turned out to be the case.

“Immigration law has really picked up since Joe Biden took office. I have several DACA (Deferred Action for Childhood Arrival) clients, the Dreamers, who can see a path to citizenship now. It's an incredible contrast to 2017 when there was also a ton of phone calls, but now they’re calling with hope and happiness.”

“Chris was a student in our first Social Justice Lawyering class, which worked on helping people released from prison get access to public housing,” Professor Brant Lee recalled. “I could tell that he had a special passion for this project, and by the end of the class he had shared with us that members of his own family had been incarcerated. And he wasn’t the only one! By the end of the semester, several other members of the class shared personal experiences in their family of someone being prison as well. But Chris really stood out as a passionate and engaged advocate. I’m so proud to see him doing so well.”

As he’s matured, Rivero has learned how to use past adversity to his advantage.

“Whenever I felt nervous about a law school exam, I would tell myself, ‘Pull yourself together. This is just an exam. You’ve been through a lot worse. You can get through this,’” he said. “I think I had a lot more to fall back on compared with other students. Some would ask me, ‘How do you stay so cool and collected?’ I’d say, ‘Come on by after class. I'll tell you a story.’”

That is a message Rivero tries to pass on as a lawyer, especially to the young people he represents.

“I practice a lot in Juvenile Court. After I talk with the kids about their case, I’ll tell them, ‘Hey, you’re in trouble right now, but this isn’t the end. You can move on from this. You can use this as fuel for your fire later. Let me tell a little story about someone just like you.’”