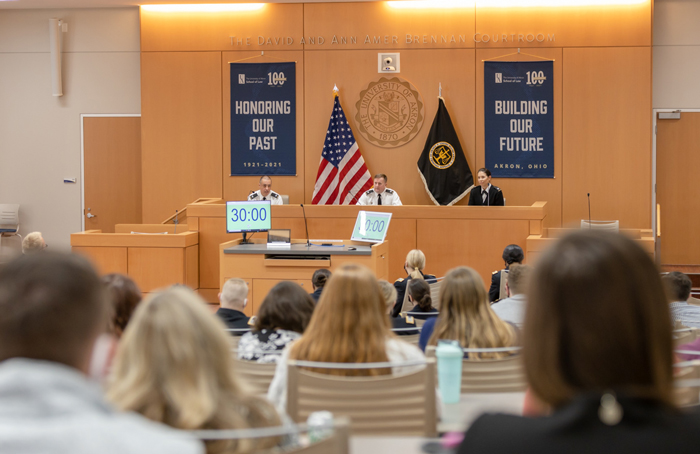 Students await the start of oral arguments at the off-site Army Court of Criminal Appeals session in the Brennan Courtroom at Akron Law. Photo: Nick Roth

University of Akron School of Law students got a close-up view of what it’s like to be a JAG officer when the Army Court of Criminal Appeals visited the school this fall. The Court heard oral arguments in an actual court-martial appeal case in front of a full house in the school’s David and Ann Amer Brennan Courtroom. The Court of Criminal Appeals is the Army’s highest court.

The students and several faculty members observed as Judge Advocate General (JAG) Corps officers argued the case, which involved an appellant sentenced to be confined for 180 days and to be discharged from the Army with a bad-conduct discharge. The convictions stemmed from incidents where the appellant physically assaulted the victim. The two issues argued were:

“Both the advocates and the members of the court were very impressive,” said Akron Law Dean Christopher J. (C.J.) Peters. “Our students saw a display of first-rate appellate advocacy and got a sense of how oral arguments look when the stakes are real. It was obvious that the JAG officers who argued the case had spent many hours preparing.”

Read the Court’s opinion in the case (subscription may be required).

This was the first time the Court has held oral arguments in Northeast Ohio.

“The Court typically holds off-site arguments twice in the fall and twice in the spring at law schools where they are invited,” Army Clerk of Courts Malcolm H. Squires, Jr., said. “But we have obviously been constrained over the past year and a half as a result of the pandemic.”

“Taking the court on the road has become standard practice for most appellate courts at all levels – federal, state, and military,” he said. “The purpose is to let the public see justice and the rule of law in action. We’re no different.”

For the JAG Corps, however, there is the further purpose of offering law students a glimpse of the JAG Corps in action and an opportunity to ask questions, which could lead to applications. 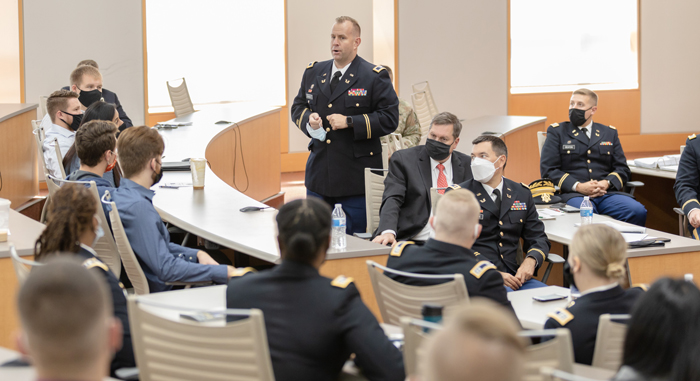 In a courtroom Q&A session following the oral arguments, students asked the judges and advocates how they prepared for the day’s proceedings, about their career paths, and what it’s like to be a member of the Army JAG Corps. Officers from the Judge Advocate Recruiting Office (JARO) were also in attendance to answer questions.

“We were honored to have the Army Court of Criminal Appeals visit the law school,” said Alisa Benedict O’Brien, assistant dean for career services and strategic initiatives at Akron Law, who organized the event. “They provided our students with an excellent educational opportunity and gave them a valuable insight into the practice of law as a JAG Corps officer.” 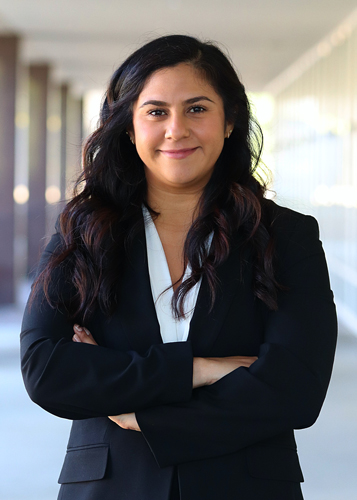 One of the Akron Law students in attendance was 2L Diana Quezada, who had already been considering entering the Army JAG Corps. She enlisted in the Army National Guard following high school and completed the Army ROTC program while an undergraduate at The Ohio State University.

“I had a chance to observe an Air Force JAG appellate court once, but I would go into the Army if I entered the JAG Corps, so it was great to have the Army court visit Akron Law, and it was great to see how many students showed up,” she said.

“One of the attractions of the JAG Corps for me is the immediate experience you get in diverse practice areas,” Quezada continued. “If you’re interested in appellate work, you’ll have the opportunity to do it much sooner in the JAG Corps than you ever would in a law firm. So, if you decide to go back to the civilian world after your four-year commitment, you’ll have an amazing resume.”

There are several entryways to the JAG Corps, explained JARO chief Lieutenant Colonel Aaron Lykling (who was not in Akron for the event).

“We will hire 100 to 150 Judge Advocates for active duty each year and another 100 of so for the Army Reserve,” he said. “They come from a wide range of law schools, everywhere from Harvard to Hofstra. The selection rate is around 30%-40%.

“About 75% to 80% of the Active-duty hires enter right out of law school,” he continued. “We also hire early-career practitioners who maybe just want to try something different from what they started out doing.”

“The Army Reserve is for people who want to maintain their civilian career, but still want to serve their country,” Lykling said. “We have over 1,800 Judge Advocates serving part-time. They are assistant U.S. attorneys, other government attorneys, and attorneys working for law firms, corporations, or as solo practitioners. One of your judges at the session in Akron is Army Reserve.”

Both Active-duty and Reserve entrants must qualify medically and physically and meet all the other standard requirements to be in the military. After they pass the bar exam, they take a six-week basic training and leadership course at Ft. Benning, Ga., then attend the JAG’s Legal Center and School in Charlottesville, Va., for 10-1/2 weeks of intensive classroom training. They leave the center fully certified to practice military law. 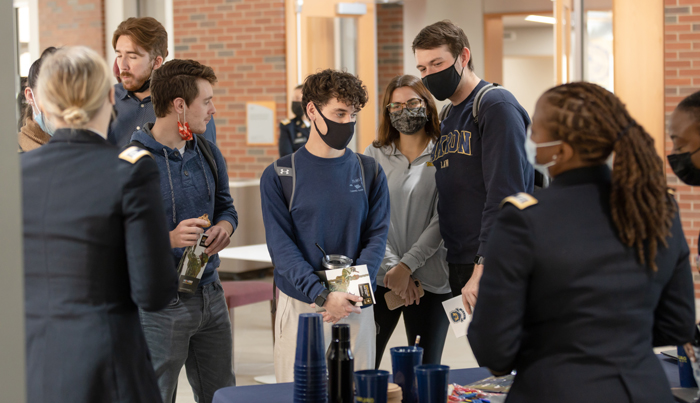 The Army JAG Corps offers paying, civilian summer internships all over the country for both rising second-year and rising third-year law students.

“The feedback we get is that it’s an awesome experience,” Lykling said. “The legal work is rigorous, and many of the interns will have the opportunity to do some cool military things, like a tandem parachute jump, depending on the location. Most of the rising 3L interns who applied received a job offer right at the end of the summer.

“We know that the JAG Corps can be a hard sell when students don’t have any familiarity with the military and what military attorneys do,” he said. “That’s why we do the off-site court visits and the recruiter visits and offer internships. We find that when students spend time with us, they get intrigued, and many end up loving it.”

For more information about the JAG Corps, visit the JARO website. Law students may apply for admission to the JAG Corps as early as their final fall semester of law school.