Welcome to Women In Mathematics @ UA

The Women In Mathematics group is a community of female math faculty and students who work together to provide support and resources for women in math at The University of Akron. WIM encourages women to pursue studies and careers in mathematics by organizing events such as seminars given by female speakers. The main goal of WIM is to retain more women mathematics students at all levels, from undergraduate through graduate, and to provide them with a strong network of support. 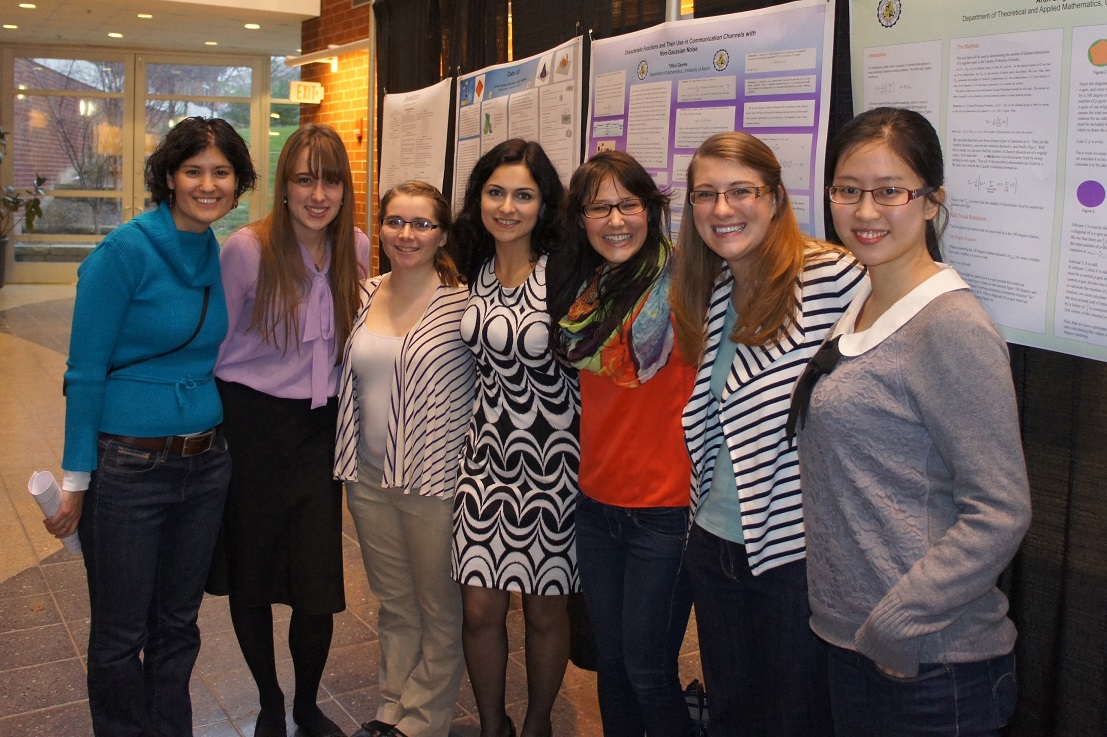 Anyone can join the student organization.

Wednesday April 12, 2017 at 3:00pm, UAkron alumna Terrian Nowden from NASA Glenn Research Center will give the talk "From Hands-on to Mathematics to the International Space Station"

On Tuesday April 4th (corrected from previous post!), WIM will join the Women in Engineering group for dinner and to listen to invited speaker Mike Lanstrum, a professor at Cuyahoga Community College, who will talk about the History of Women in Mathematics. Free dinner at Rob's Dinning Hall from 5:45-6:20 p.m. The talk will be held in ASEC 223B. Students who would like to attend should RSVP to hec9@uakron.edu by April 1st, 2017. This event is open to men and women. Hope you can make it!

Who: Xiaoyu Zheng, Associate Professor in the Department of Mathematics at Kent State University

Abstract: Ellipsoids are one of the simplest shapes of smooth convex bodies. The shape anisotropy of the ellipsoids make them behave very differently from spheres, such as packing, collision dynamics, and many other physical properties such as the optical birefringence. In this talk, I would like to present some old results and most recent work on interactions among ellipsoids. The mathematical tools used here are linear algebra and calculus.

Who: Dr. Abigail Shoben, Associate professor in the Division of Biostatistics at The Ohio State University

Who: Pamela Pyzza,  Assistant Professor in the Department of Mathematics and Computer Science at Ohio Wesleyan University

Who: Wanda Strychalski, Assistant Professor in the Department of Mathematics, Applied Mathematics, and Statistics at Case Western Reserve University

Abstract: A biological cell is the fundamental unit of life. Cell migration is a necessary process for embryonic development, wound healing, and immune responses. In order to migrate, signaling proteins trigger cytoskeletal remodeling and substrate adhesion that result in translocation. Accomplishing these tasks requires highly coordinated chemical and mechanical responses. Mathematical modeling is an important tool for determining how components in such a complex system interact with each other in order to understand the overall biological system. In this talk, I will discuss mathematical modeling of cellular protrusions called blebs, the role of blebs in cell migration, and the synergy between mathematics and biology.

Title: Twin primes and their kin

Title: Being an Actuary

Abstract: The Department of Mathematics will host a career seminar by Ms. Ginny Gegick of Aon Hewitt on December 3rd from 3:30 to 4:30 in LH 312.  Aon Hewitt is a leading global provider of risk management, insurance and reinsurance brokerage, and human resources solutions and outsourcing services.  Ms. Gegick, a UA alumna, works as a retirement actuary for Aon Hewitt.  She will talk about what retirement actuaries do and discuss employment opportunities with Aon Hewitt.

Title: The Critical Role of Math in Flow Visualization Techniques

Abstract: At NASA Glenn Research Center, researchers and engineers are working on designing the next generation of air vehicles and their propulsion systems. As part of the design process, it is very important to understand how air flow passing over and around the vehicle’s engine affects its overall health and performance.  The study of this air flow interaction is referred to as aerodynamics.  Often times, the aerodynamics of a newly designed vehicle are studied in a wind tunnel where air flow, mimicking real flight conditions, is passed over a scaled model of the aircraft and/or a model of the aircraft’s engine.  The air flow passing over the model is normally invisible to the human eye, however it is very useful to be able to “see” this air flow.  Several flow visualization techniques exist in order to make the flow visible. One such technique is known as “schlieren” which is an optical method used to visualize the flow, based on light rays refracting through the flow’s density gradients.  The presentation will not only go over the schileren technique, but will also give real-world examples of the technique and its sister techniques in use at NASA.  In addition, a significant portion of the presentation will show how math plays a critical role in the implementation and understanding of these techniques and their results.

Abstract: Hidden Markov Models (HMMs) are typically used to predict hidden regimes of observation data. Therefore they are used in many different areas such as speech recognition systems, computational molecular biology, and financial economic predictions. In this talk we use HMMs for both single observation data and multiple observation data to predict regimes of some macro economics variables such as: Inflation (CPI), Economics Growth (GDP), Stock Market Index (S&P500) and Market Volatility (VIX). We use the variables to calibrate HMMs' parameters and then use HMMs with the obtained parameters to predict economics trends and stock prices. We also avoid overfitting by analyzing relationships between macro economics regimes and stock performance to make stock selections.

Refreshments will be served at 2:30pm.

Abstract: Fourier analysis provides many elegant approaches to differential operators and related tools in PDE-based image processing. Replacing differential operators with the operators based on multiscale sparse representation systems (such as wavelets or composite wavelets, including shearlets), leads to the design of a brand new class of adaptively anisotropic operators. Those are not meant to approximate the differential operators, but rather to replace them in a variety of applied signal processing settings, such as diffuse interface approximations to the TV (total variation) functional  in a variety of applications.  Our ongoing research aims at merging the knowledge and experience of the applied harmonic analysis/sparse systems, compressive sensing and PDE communities to create qualitatively new and highly adaptable methods for image analysis and reconstruction.

Title: From Hands-on to Mathematics to the International Space Station

Abstract: While attending UA I was a non-traditional student, working full-time and attending classes part-time.  Early in my career as a NASA technician, I’d been afforded opportunities to grow and develop my craft; becoming a specialist in the area of micro-miniature techniques.  Deciding to return to college to complete my degree was a surprise to my organization.  Mathematics provided me a new skill, analytical thinking.  I am now a power system analyst for the International Space Station.

Title: Modeling Quasicrystals with Dynamical Systems: An Investigation of Periodicity and Quasiperiodicity

Abstract: The mathematical modeling of quasicrystals, whose discovery by Dan Shechtman earned him the 2011 Nobel Prize in Chemistry, is a fascinating problem that involves work in different areas of mathematics, and has applications to different areas of science. We are particularly interested in the symbolic dynamics on aperiodic sequences and tilings. In this talk, we trace a brief history of quasicrystals and discuss the surprising interplay between dynamical systems and mathematical physics.

Title: What do actuaries do? How can you become one?

Title: My journey to a PhD through the study of representation theory of Lie algebras

Abstract: Dr. Pamela E. Harris is a Mexican-American Davies Research Fellow with dual appointments at the United States Military Academy and the Army Research Lab in Adelphi, MD. Her PhD was conferred by the University of Wisconsin at Milwaukee in May 2012. In this talk, Dr. Harris will discuss her journey to receiving her PhD and will focus on introducing her research interests, which concern the representation theory of Lie algebras, in particular as this relates to the area of combinatorics.