Fans cheer the Zips at InfoCision Stadium - Summa Field, located on campus. UA students get in free to the Zips home games with their student ID, called the "Zip Card." 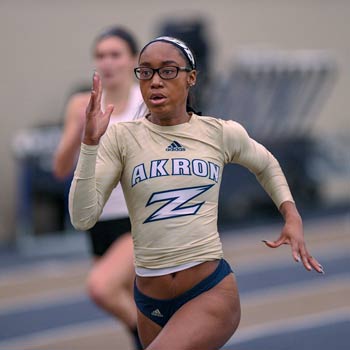 Athletics: Home of the Akron Zips

The storied history of Akron athletics dates back more than 100 years. John Heisman, the great innovator of football coaching and namesake of the Heisman Trophy, coached the Zips in 1893.

More recently, Zips football moved into a modern, on-campus stadium, making it easy for students and their friends to attend games. 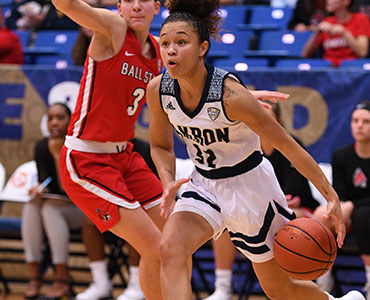 Today, UA fields 16 men's and women's varsity teams, comprised of 300+ student-athletes. We compete in the Football Bowl Subdivision (the highest level of collegiate football) of NCAA Division I athletics. We are members of the Mid-American Conference.

UA is home to the 2010 Men's Soccer National Champions. 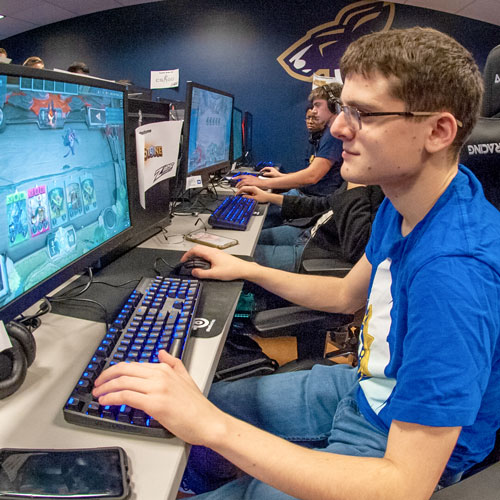 UA's varsity teams compete against other universities in League of Legends, Overwatch, CS:GO, Hearthstone and Rocket League. Plus, we also have 10+ plus gaming clubs and three gaming facilities. Learn more.

How did UA get its nickname, the Zips?

One of the most distinctive nicknames in intercollegiate athletics belongs to Akron.

In 1925, a campus-wide contest was held to choose a nickname. Suggestions submitted by students, faculty and alumni included:

After a three-way vote—one by the student body, one by the University lettermen and one by the local sports writers and faculty representatives—the winner was the "Zippers," inspired from a very popular rubber overshoe (over 500,000 sold the first year) invented by Akron’s B.F. Goodrich Co.

Goodrich introduced its rubber galoshes in 1923 and it made a lasting impression on the world. The footwear featured an ingenious invention, a slide fastener with interlocking metal teeth. With a quick pull of a tab, the overshoes opened wide or sealed shut.

The product’s original suggested name was the "Mystik Boot," but the name just did not work for Goodrich President Bertram G. Work.

"What we need is an action word," he told a group of sales representatives. "Something that will dramatize the way the thing zips." From that he said, "Why not call it the Zipper?"

The evolution of Zippy, The University of Akron’s mascot, began in 1953 when the student council, under president Dave Frye and committee for a mascot chairman Bob Savoy (an All-American diver for UA), decided the University needed a mascot.

"Zippy" the kangaroo was officially declared UA’s mascot on May 1, 1953.

The selection of the kangaroo for a mascot brought forth the wrath of The Buchtelite and the Akron Beacon Journal as the name was chosen without the benefit of a campus-wide vote. There was support for the new mascot with defenders saying, "the kangaroo is fast, agile, and powerful with undying determination – all the necessary qualities of an athlete."

It is difficult to imagine such dissent given that Zippy is one of the most beloved symbols of the University. In fact, during an eleven-week national mascot contest, Zippy defeated all challengers. Zippy, after a first-round bye in the playoffs, cruised to victories over Syracuse’s Otto in the semifinals and Minnesota’s Goldy Gopher in the final to become the 2007 Capital One Mascot of the Year.

Dick Hansford, UA student council adviser, liked the kangaroo when Akron chose "Zippers" as its nickname. He recalled the suggestion was also inspired by a popular comic strip at the time called "Kicky, the fighting kangaroo." No one recalls who made the arrangements for the first costume, but a paper-mache head was produced along with a brown furry uniform that zipped up the back. Pete Demming debuted that first mascot uniform in 1954, at the inaugural Acme-Zip Game – not as "Zippy" but as "Mr. Zip"

The first known printed reference to the mascot as "Zippy" was a 1965 Zip football press brochure. The Buchtelite’s first use of the name "Zippy" came Sept. 24, 1965, in an identification of a photo of the cheerleaders listing "Mascot – 'Zippy' – Charles Huettner."

Zippy at your event