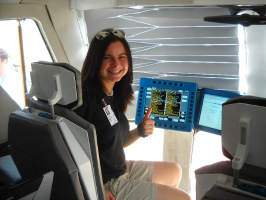 Gras also received this year's undergraduate Akron Council of Engineering and Scientific Studies (ACESS) scholarship for the and she was honored at the ACCESS banquet in November 2009.

Gras earned the Electrical Computer Advisory Council (ECE) Scholarship in the spring of 2009.

Furthermore, Gras was the recipient of the Choose Ohio First STEM (Science, Technology, Engineering, Math) scholarship at The University of Akron through the .

On March 18, 2010, Courtney Gras, a junior majoring in Electrical Engineering, was awarded in the Akron/Canton Region 2 Institute of Electrical and Electronics Engineers (IEEE) Paper Contest.  Her technical paper entitled "Battery Management for a Lunar Rover" was presented to IEEE representatives and to faculty and students.  As a result of her award, in April of 2010, Courtney had the opportunity to represent the Akron IEEE and the of at the IEEE Region 2 Student Activities Conference (SAC) at 's of in . 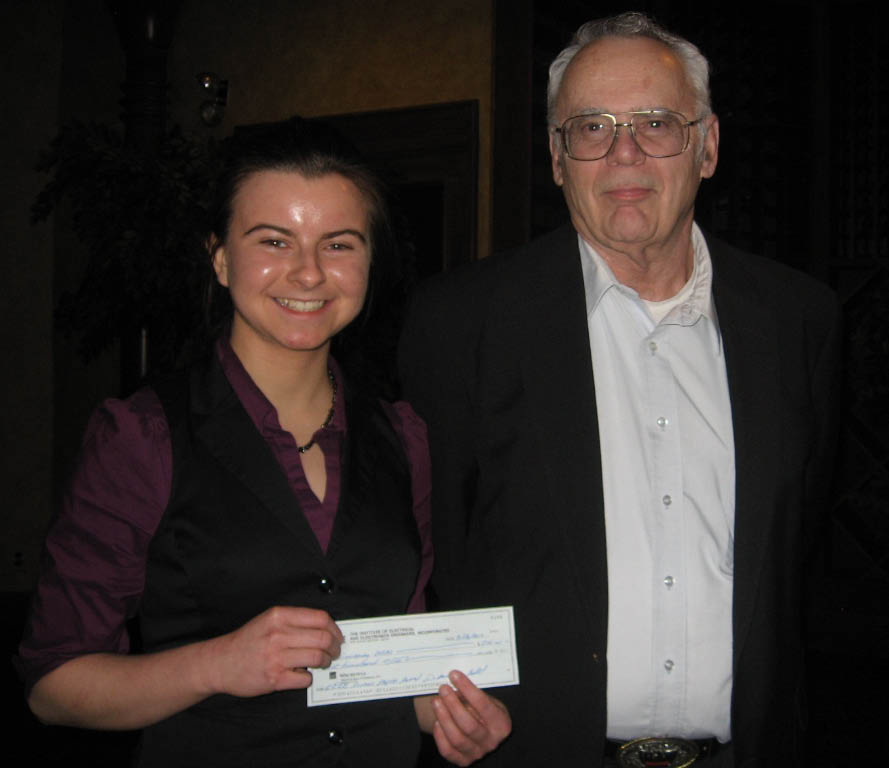 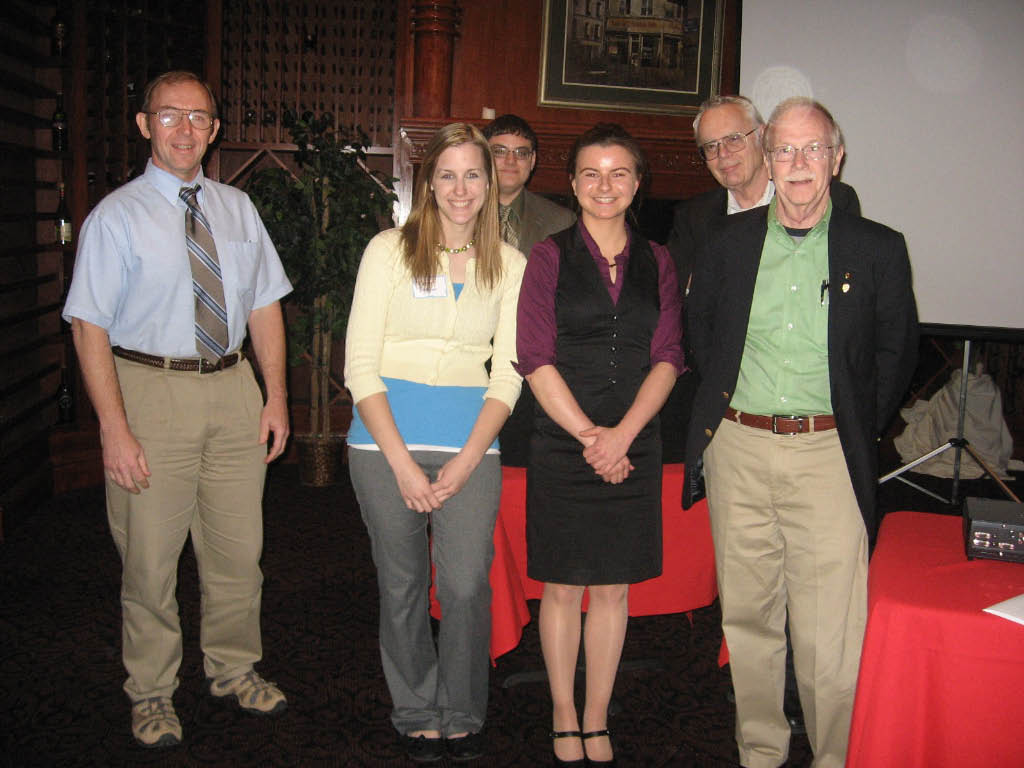 Tom Vo, a graduate student in Electrical Engineering, and honors student, Courtney Gras, entered the Launch Town Regional Business Idea Competition.  They were selected as one of four teams to give presentations at the , in competition for a $25,000 prize.  On April 19th, 2010 Vo and Gras presented their work and proudly represented The University of Akron in this competition. 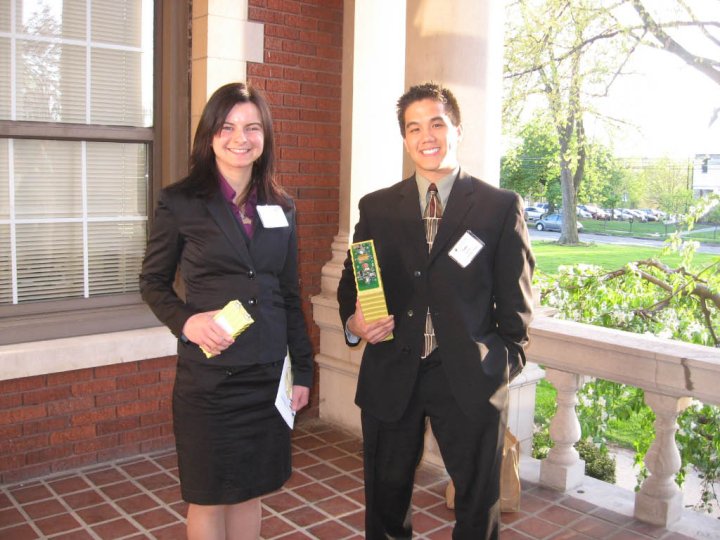 Courtney Gras and Tom Vo, Masters student in Electrical Engineering, smile for a quick picture after their presentation at the Launchtown Business Idea Competition.

The NASA Moon Tasks collegiate competition requires entrants to design a system for the next manned lunar rover. Submission is in the form of a technical report which is judged by NASA engineers whose evaluation is based on criteria including inventiveness, feasibility, baseline comparison with relevant technology, and review of the literature.

Dr. Tom Hartley, a professor of Electrical and Computer Engineering, guided Honors students Courtney Gras and Ben Magistro last year, in their submittal of an entry to this contest entitled, “Battery Management for a Lunar Rover.”  The entry was selected as one of three top papers. The top three teams were flown to , to present their work in front of NASA lunar rover engineers at the NASA D-RATS facility. 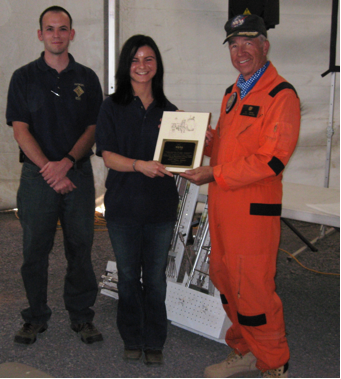 The Desert RATS is a NASA-led team of research partners who collaborate on human-robotic exploration. This working group, led by NASA personnel, is comprised of both NASA and non-NASA employees. The Desert RATS field test is the culmination of various individual areas’ development efforts in a coordinated demonstration under representative (analog) planetary surface terrain conditions. The purpose of the RATS project is to promote the development of preliminary concepts for extravehicular activity (EVA) systems by providing hands-on experience with simulated planetary surface exploration, hardware and procedures.

The RATS activities also are of great importance in helping to develop the necessary levels of technical skills and experience for the next generation of engineers, scientists, technicians, and astronauts.

Out of the three teams, ’s came in second place, just behind the first place team consisted of 28 seniors from the . (Dr. Alex De Abreu Garcia, the department chair of Electrical and Computer Engineer at the , attended the event with the UA team). 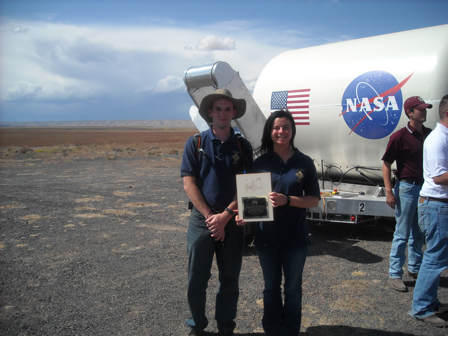 Ben Magistro and Courtney Gras stand in front of the ATHLETE - a 6-legged robot designed for transporting modules on the moon.

In addition to the presentation at D-RATS, the UA Honors students also had the opportunity to tour the test site and speak with NASA engineers currently working on the development of the next-generation manned lunar explorer. The team was also given a tour of the Meteor Crater, Lowell Observatory, US Geological Survey, and the .

As part of the Moon Work Competition for 2010, students had the opportunity to apply for NASA internships related to Lunar Surface Systems. Courtney was one of 4 students selected for an internship at in . After spending a month in working with NASA’s Lunar Surface Systems under the Constallation program in the Mission Management Team, she will travel out to NASA’s D-RATs facilities for a month of field-testing equipment and technology intended for the next Lunar base. 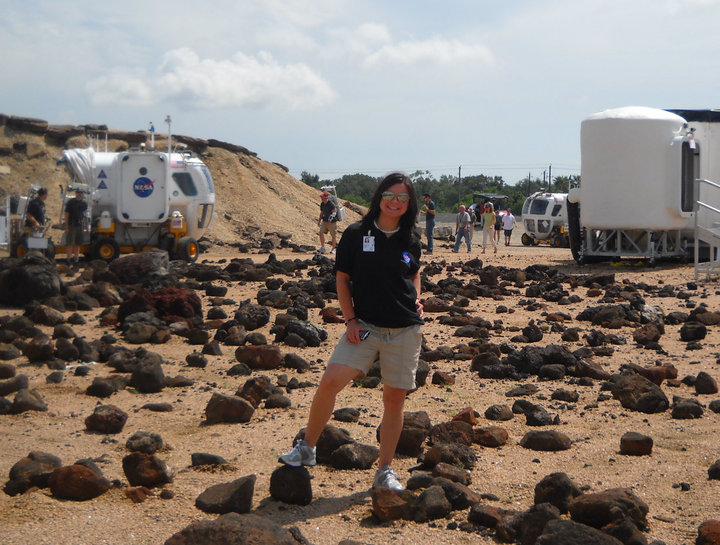 At her internship at , Courtney Gras was standing in the "rock yard" where dry-run field testing of the Lunar Electric Rover and other Surface Operations were taking place. 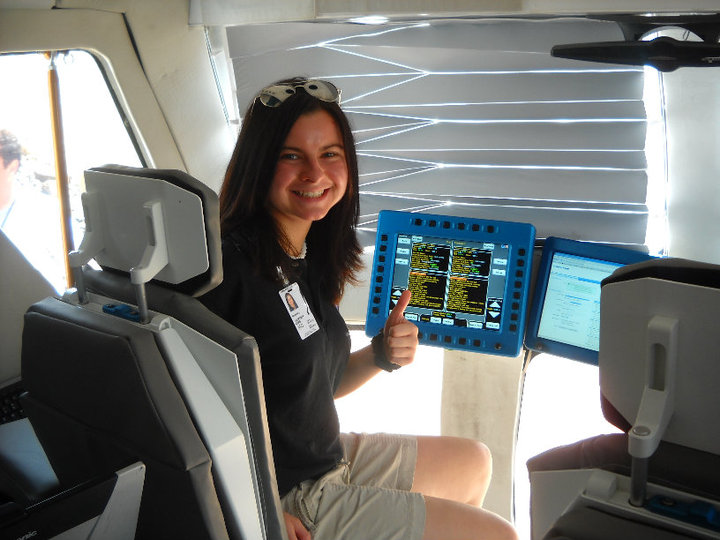 Courtney Gras is excited to sit in one of the pilot seats inside the Lunar Electric Rover. As part of her internship responsibilities, she had the opportunity to ride in the Rover for test runs.

In the NASA Lunabotics Mining Competition, after several heroic days of fixing their internet-based communications and controls, the team was one of only six teams that were able to load lunar regolilth into the meter high bin with their teleoperated robot miner.  The UA team received the Honorable Mention award.

Also while at the competition, the team saw the Space Shuttle Atlantis land from the runway bleachers, observed a Delta rocket launch at night, ate dinner under the Apollo 18 vehicle, spoke with several astronauts, talked with the driver of the Mars rovers along with other NASA engineers, interacted with the Kennedy Space Center Director, and talked with the Assistant and Associate NASA Directors from Washington.  Overall, the team had an amazing experience.

The of team stands by the Rocket Yard at .  The students from left to right are: John Quayle-Zimmer, Courtney Gras, Ben Chaffee, Brian Haynes, Michael Quayle, Sriram Yarlagada, Dr. Tom Hartley (our advisor) and Tom Vo.

Congratulations Courtney and team on proudly and successfully representing the !