Third-year (3L) University of Akron (UA) School of Law student Henna Schafer has been named the graduate school co-chair of the University’s newly created Inclusive Excellence Action Team. Schafer worked as a legal intern at the Ohio Civil Rights Commission in the summer of 2019 and was a law clerk earlier this summer at a Cleveland law firm. She is also on the law school’s trial team. 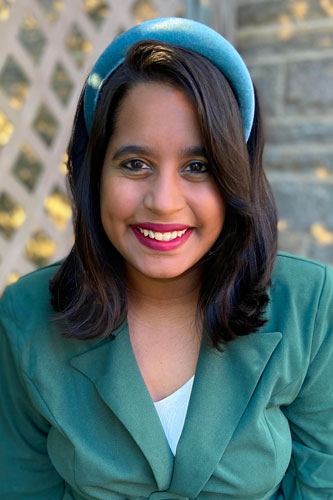 Announced at the June 10, 2020, Board of Trustees meeting by Student Trustees Andrew Adolph and Taylor Bennington, the Action Team will focus on issues of race, equality and inclusion as part of a thorough review of UA’s systems and processes to identify and eliminate implicit bias and discrimination. Schafer’s co-chair on the undergraduate side is Jason Render Jr., a senior studying political science and national security.

Schafer was recommended to Bennington by Dan Kosich, a 3L law student and vice president of the Student Bar Association. He and Bennington knew each other through a small, informal network of leaders from the UA student governance organizations.

“Taylor asked me if I knew anybody who could help lead this conversation, and I knew Henna was the person to do this,” Kosich said. “She really deeply cares about issues surrounding ethnicity, race and inequality; and her own experience lends her credibility. She’s been a big proponent for as long as I’ve known her, which is since we started law school.

“I learn something every time I talk to her,” he continued. “She is a welcome and prominent voice in class, and it's always a professional experience when speaking with her. It’s how she holds herself. And she is just a pleasure to work with as well.”

Schafer didn’t hesitate when Bennington asked her to serve.

“I said yes because I had been waiting for a platform like this for quite a while,” she said. “Even before I came to law school, I knew that the legal field was not very diverse. I had researched how many female attorneys there were, and how many women of color and just people of color were attorneys.

“And so pretty much the minute I stepped into law school, I wanted to be an advocate for people of color and just people with various different abilities who are underrepresented. That was why I came to law school, so this project falls within that purview. It’s a really positive thing to see, despite COVID and the unknowns going into the fall, that this is still a priority.”

“We are proud that one of our law students has accepted the nomination to take on this important position,” said School of Law Dean Christopher J. (C.J.) Peters. “I know that Henna is highly regarded by faculty and staff as well as by her follow students. As a law student, I believe she can bring a valuable perspective to the role.”

Peters says he shares Schafer’s concern about diversity at the University and the law school.

“Enhancing diversity has been a focus of our student recruitment efforts in recent years. Due at least in part to these efforts, we expect that between 20% and 25% of the incoming J.D. class in fall 2020 will consist of minority students.”

Peters pointed to other diversity and inclusion initiatives, including the school’s participation in the Prelaw Undergraduate Scholars (PLUS) diversity pipeline program sponsored by the Law School Admissions Council and in the Law and Leadership Institute program for inner-city high school students.

“And we are developing new programming for the upcoming academic year that will focus on racial and social justice issues,” he noted.

Schafer definitely brings a good deal of personal diversity to the new role. She was born in India and adopted by a white American family from Hartville, Ohio, when she was nine months old. Hartville is 17 miles southeast of Akron.

“Hartville is still a very rural area that was not diverse at all,” she said. “It didn’t really affect me when I was younger, but when I got to college I started to advocate for diversity.”

Before Schafer went off to college, though, she lived for a year in Belgium as a Rotary Youth Exchange student, repeating her senior year of high school and becoming fluent in French.

“My parents really encouraged me to go,” she recalled. “My dad said that he grew up in this little rural town thinking that it was the only area of the world that mattered. It wasn't until he traveled himself that he realized that wasn't true. And so, he really wanted me to go out and experience that for myself. That year helped me develop a global perspective and really influenced the rest of my life.”

“It was right after the 2016 election when I decided to go to law school,” she said. “I was working full time at a TV station in North Carolina as a news producer. I did not like being dictated to about what needed to be on the news, in comparison to what was really going on in the world. I felt like not only my voice, but [the voices of] many groups were underrepresented, not only in the media, but in politics. I felt there needed to be more advocacy for that, and I wasn’t accomplishing it in broadcast journalism.

“I had worked part time for a law firm earlier, and it came back to the forefront that law is a career where you can really be an advocate. Ultimately, I think about being a state representative or a senator, but I wanted to make sure that I had that legal education before I pursued anything like that.”

And that brought her to Akron Law.

“I really like Akron. I think the professors are great, and it's a really good community. We have a lot of part-time students who are still working, and students at different ages and phases in their life. I think that's really important, especially in this field, to have an array of life experiences.”

But just like at any school, particularly a law school, she believes things can always be done better.

”One of the things that got to me my very first year was that in my section of about 50 students, I am the only Indian person. And in our entire third-year class of about 100 full-time students there are only about 10 students of color. It’s not that I was anticipating that it would be different, but I was hoping it would be,” she said.

“I had a conversation with one of my professors about it, and she said she remembered going to law school and looking around and seeing no one else who looked like her. And I thought, wow, but that was 30 years ago. So, I definitely think things can be pushed forward.”

And that gets back to the Inclusive Excellence Action Team.

“We're pretty newly formed right now,” Schafer said. “Jason and I want to have a core team of students from different organizations. We want to make sure that we are covering everyone who needs to be included in this conversation and this action.

“We do have some big agenda items that we developed ahead of time, such as having faculty that is more representative of the student body and the diverse Summit County community,” she said. “Then, once we have our core team assembled, we can talk about some other areas and other actions.”