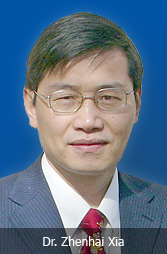 Today, Science Magazine released groundbreaking fuel-cell research by Dr. Zhenhai Xia, UA professor of mechanical engineering, and a team of three other researchers from the University of Dayton and Wright-Patterson Air Force Base. Their discovery of a new class of electrodes that can be used in fuel cells provides an economical alternative to the costly precious-metal catalysts currently used in fuel cells.

Specifically, the team discovered that nitrogen-doped carbon nanotube arrays can act as metal-free electrochemical converters that produce electricity from fuel efficiently and economically.

"The nanotube arrays provide much better electrocatalytic activity, long-term operation stability and tolerance to crossover effect than platinum, which is currently used in fuel cells," Xia explains. "To our knowledge, the nanotube material represents the first metal-free electrocatalyst with performance that clearly exceeds that of the platinum electrode."

Fuel cells, which are currently under intensive research and development because of their promising large-scale applications as environmentally benign energy-conversion technologies, primarily utilize expensive platinum as a catalyst, hindering their commercial viability.

"This new class of electrodes could be used to develop low-cost and high-performance fuel cells of practical significance," Xia says. "The applications could someday include electric and hybrid vehicles, submarines that could operate silently underwater for weeks, airplanes powered by only a fuel cell and lightweight batteries, power plants, notebook computers, portable charging docks for electronics and power-hogging smart phones with large displays and elaborate features like GPS."

Xia and his team's published research is available at http://www.sciencemag.org. This is the second time in about four months that a major journal has published work from Xia and his collaborators. Science recently published their research for an adhesive 10 times better than gecko feet at resisting some forces.