Spider webs just don’t fossilize. But if they did, they probably would look quite different from those of modern spiders. And that’s important, says University of Akron researcher Dr. Todd Blackledge, because it implies that new web constructions and silk types helped the order Araneae evolve into one of the insect world’s superpowers. 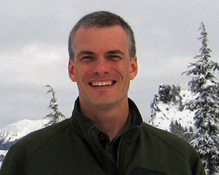 A modern spider’s silk web construction differs significantly from its ancestors and gives a strong indication of the link between spider evolution and web function, according to Blackledge, an associate professor of biology in UA’s Integrated Bioscience Program. Blackledge shares these findings in his research, “Reconstructing Web Evolution and Spider Diversification in the Molecular Era,” published in this month’s Proceedings of the National Academy of Sciences.

Blackledge and his research team determined that the silk architecture of a web relates to spider diversification and is linked to the arachnid’s success as a predator, as revealed in their study of the araneoid orb and cribellate webs. The araneoid orb, made of stretchy spirals coated with a moist adhesive, provides access to a plentitude of flying insects. Many spiders, however, produce cribellate silk, a radically different dry adhesive that adheres to prey. Some cribellate spiders also construct aerial orb webs, but most spin sheet-like webs or have abandoned capture webs altogether, according to the article.

“The most diverse families within orb-weavers no longer build orb webs, but instead spin aerial sheet webs or cobwebs,” Blackledge says. “To understand spider diversification, it’s essential to examine the pattern of evolution of web-spinning behaviors.”

Blackledge points out that orb webs arose only once and the evolution of these webs is marked by a dramatic increase in their geometric regularity due to spiders’ increased spinning. Modern spiders complete orb webs in a fraction of the time required for cribellate orb webs.

“Our study refutes the idea of evolutionary convergence. Instead of these two types of spiders, which use very different adhesive silks, separately evolving orb-spinning behaviors,” Blackledge explains, “we show that the behavior arose a single time and that spiders subsequently switched the type of silk that they use to make webs sticky.”

According to Blackledge, these behavioral shifts in silk and web production by spiders likely played a key role in their evolutionary success.

The article is available here.