When family and friends gathered on Nov. 16 for an early celebration of Irving J. Olson's 100th birthday, the guest of honor, for once, was in front of the camera — not behind it. The highlight for everyone was when Olson was awarded an Honorary Doctorate of Humane Letters by The University of Akron. 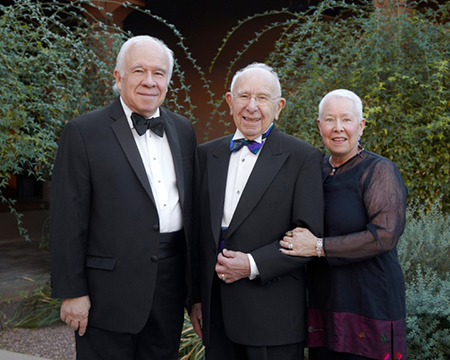 Irving J. Olson, center, with his son, Steve Olson, and daughter, Carolyn Stelman, at his 100th birthday party, where he was awarded an Honorary Doctorate of Humane Letters by The University of Akron. Photo by James Maguire.

The Akron native, who has lived in Tucson, Ariz., since 1998, has had a passion for photography since early childhood, when he received a Brownie box camera. But on this night, Olson's art was just one of many reasons to celebrate the man. He also was honored for his success as an entrepreneur and businessman, and for his community involvement and philanthropic efforts.

Although Olson, whose actual birthday is Nov. 26, never earned a college degree, he was a UA student, albeit briefly. The anecdote was shared immediately before his good friend and UA education alumna, Karen Krino, helped present Olson with his honorary degree as he wore a graduation robe and mortarboard.

As the story goes, he was first a student in the College of Engineering, but Dean Frederic Ayer informed the young Olson he was not "making the grade" and should change his major to accounting. Ayer didn't ask what Olson thought, he just transferred him. Less than a semester later, a quite unhappy Olson dumped all his papers and books on Ayers' desk and left UA behind to begin his own business!

Even though these were the early years of the Great Depression, Olson was able to open a radio repair and sales business in his father's garage. His brothers, Sidney and Philip Olson, joined the business, which expanded into Olson Radio Warehouse and then became Olson Electronics, a chain retailer and mail-order business. He sold the business to Teledyne Industries in 1963.

Degree or no, Olson and his late wife, Ruth, placed a high value on higher education, which led them to establish The Ruth and Irving Olson Art Student Reward Fund at UA. It continues to ensure that deserving students majoring in graphic design and digital imaging will have an opportunity to achieve their dreams. 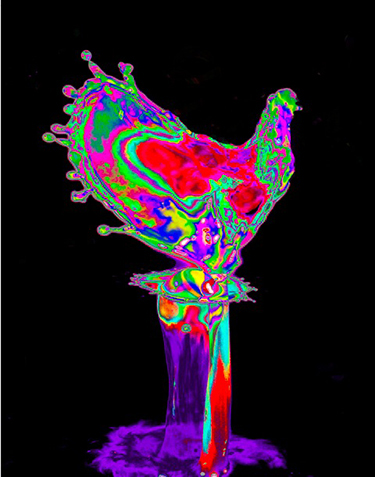 While the images Irving J. Olson usually captures in his "Water Drop" art are abstract, this example looks very much like a bird, perhaps a turkey or a peacock.

And Olson's business success made his own dream of retiring at age 50 possible, although he quickly launched a second career in photography. The Olsons, both avid photographers and frequent travelers, together visited more than 125 countries. Their work is still on display locally, most notably at E.J. Thomas Performing Arts Hall and Summa Health System’s Akron City Hospital.

These days, Olson's photography has taken a decidedly scientific turn as he creates what he calls his "Water Drop Pictures." He has outfitted the kitchen in his home to shut out all light so that when he sets up his digital camera, he can capture the instant when two or three drops of water collide. By adding color to the water, he can produce vivid, abstract images.

Those he likes he prints in a 24" by 30" format. Some of them can be found on campus in the Olson Research Laboratory. "Water Drop Pictures" also hang at the Hearst Foundation and the Jewish Federation, and the Smithsonian Institution has featured them online.

From the young amateur with a Brownie camera to the practiced eye he is today behind the latest in digital equipment, Olson has a love for the art of photography that has never waned.

"Photography interests me because it is magic, especially since I have gone digital," he notes.

As his next century begins, Olson intends to continue the "Water Drop" series.

"It usually takes between 200 and 500 tries to get a water drop that is good," the artist explains. "It is not easy and it is very complicated. Water drops have minds of their own and it is difficult communicating with them," he adds with a smile.

And what does Dr. Olson think of his honorary degree?

"Being awarded the doctorate means I have not lived in vain."

To learn more about Irving J. Olson’s photography and to see some of his work, visit Irving Olson/Smithsonian.