Dr. Gary B. and Mrs. Pamela S. Williams, who met as undergraduates at The University of Akron, have remained connected to their alma mater in the decades since they both crossed the stage at Commencement in 1968.

Dr. Williams, who earned a B.S. in Biology (with honors), went on to earn his medical degree at The Ohio State University College of Medicine in 1972 and he then completed surgical training at Summa Akron City Hospital.

Pam Williams earned a B.S. in Elementary Education and taught at schools in Cuyahoga Falls, Worthington and Akron. As an undergraduate, she was a member of Alpha Delta Pi sorority.

The Williamses have remained deeply rooted in the Akron community.

Dr. Williams, who is now retired from his position as a full-time surgeon for Summa Akron City and St. Thomas Hospitals after nearly 40 years in practice, continues to see patients and do surgery on a part-time basis. He was chief of the Division of General Surgery at Summa Health System and also served as Medical Director of Summa’s Breast Health Cancer Center. He is an associate professor of surgery at Northeast Ohio Medical University and he has been an instructor of surgery at The Ohio State University.

Pam Williams has devoted much of her time to volunteer work and philanthropy. As an American Red Cross volunteer, she is often deployed to disasters across the United States. She also is a member of Northern Ohio Golf Charities Foundation, serving as its president in 2009 and serving as a chairperson of the City of Akron Housing Appeals Board. Previously, she served on the United Way of Summit County Board, and is a past president of the Leadership Akron Alumni Association and is a board member and past president of the Summit County Bluecoats Inc.

At her alma mater, Pam Williams is a member of The University of Akron Foundation Board of Directors and the Committee on Directors, as well as the President’s Advisory Council. She also serves on the Buchtel College of Arts and Sciences Dean’s Council and is a past member of the College’s Advancement Council. 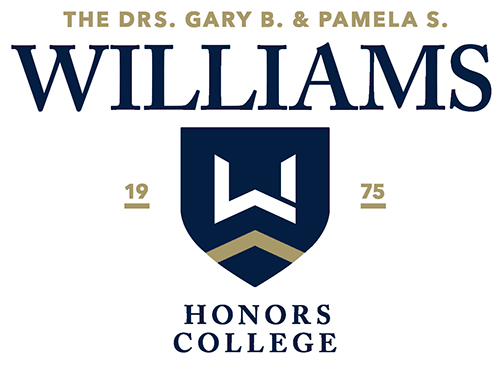