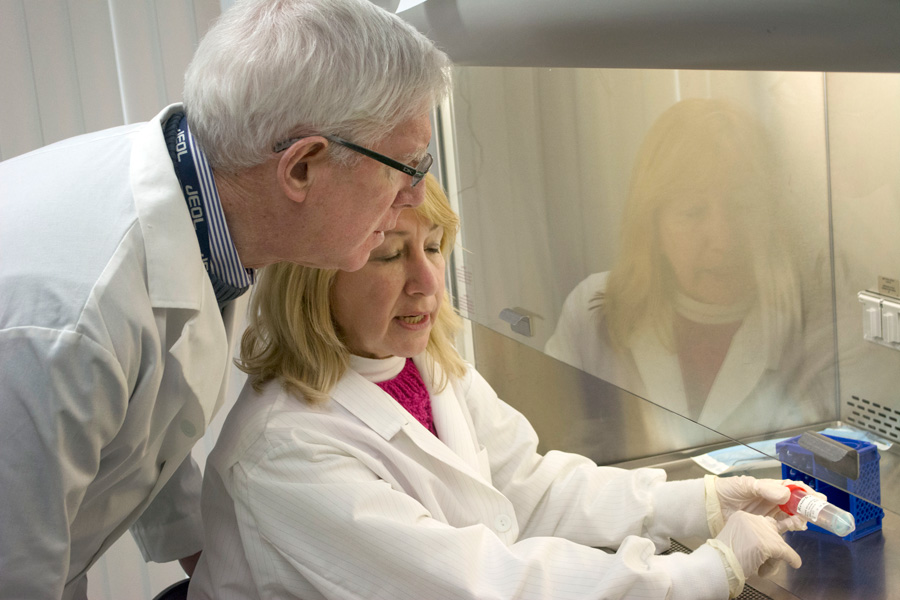 Dr. William Landis, G. Stafford Whitby Chair in Polymer Science at The University of Akron, and his UA research associate Robin Jacquet discovered, with fellow collaborators, that a high occurrence in ACL injuries among female athletes may be traced to genes. Photo by Lauren Collins

FEMALE ATHLETES endure two to eight times more anterior cruciate ligament (ACL) injuries than male athletes. Now it appears that genes are a major factor, according to Dr. William Landis, G. Stafford Whitby Chair in Polymer Science at The University of Akron, and Dr. Kerwyn Jones, chair of pediatric orthopedics for Akron Children’s Hospital. Their findings could change the way women receive sports training and treatment for their injuries and could possibly lead to genetic counseling regarding athletic participation. 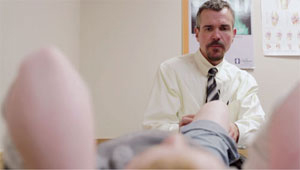 Jones and Landis have been probing the significant gap in ACL injury occurrence among young women and men athletes for years, exploring other potential causes like hormones and the gait or stance of women as compared to men.

“We wondered about the influence of genes and how they might affect the structure or integrity of these ligaments,” Landis says, explaining that he and Jones examined 14 fresh surgical samples of ruptured ligament tissue taken from both female and male athletes who suffered non-contact injuries of the tissues. “After some very detailed and extensive analysis through gene microarray techniques, we discovered 32 genes that were expressed to much different degrees in the injured ligaments of females compared with those of males.”

Of the 32 expressed genes, the researchers closely examined three that gave rise to specific proteins related to ligament structure and integrity. They discovered that all three genes regulated ligament tissue in a much different manner in female compared to male tissue.

“The differences clearly may account for weaker anterior cruciate ligaments in the females compared to the males,” Landis says. 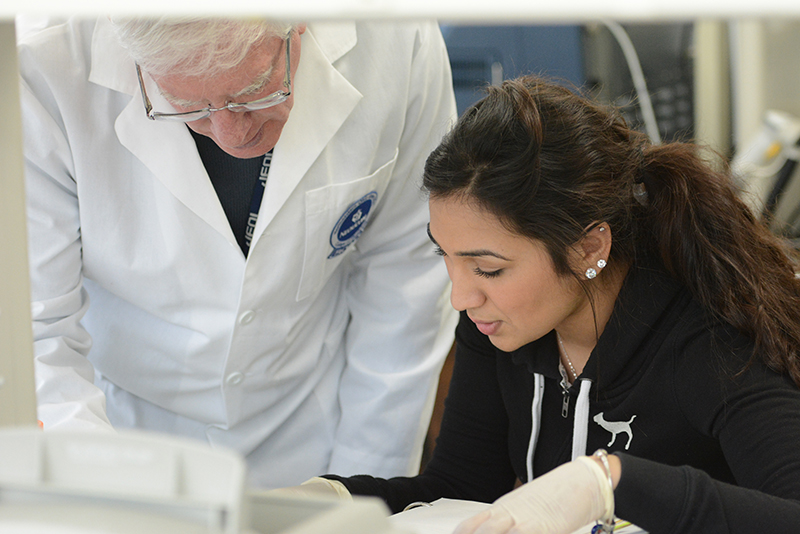 Published in the Journal of Bone & Joint Surgery, the finding has significant implications in sports medicine and training, orthopedics and clinical practice. The discovery could open discussions about the value of genetic counseling for young women interested in participating in sports, or the need for specialized training.

“We can’t change genes,” Jones says, “but we can help girls strengthen their core and improve their technique. Several exercises and prevention programs have been proven to reduce the number of ACL injuries and we can and should introduce them to all girl athletes starting in middle school.”

“Clinical treatment and training in sports for females and males would likely now need to be modified so that the anterior cruciate ligaments could be strengthened appropriately in order to reduce or avoid injuries to this tissue most common in females,” Landis adds. “It’s also possible that genetic counseling may be used to guide personal decisions about taking part in athletics.  The study presents an entirely new, unanticipated and extremely important perspective about anterior cruciate ligament injuries observed so often in female athletes compared to males.”