Akron esports team No. 3 in nation

The University of Akron Zips Esports’ Akron Rocket League team is currently the No. 3 team in the nation following a weekend of competition during the Collegiate Rocket League Nationals held at the Esports Stadium Arlington in Arlington, Texas.

Rocket League is a vehicular action soccer game. Three players control rocket-powered cars to hit a ball into an opponent’s goal to score points, much like traditional soccer.

Akron Rocket League placed third at nationals after a 4-1 loss in a best of seven match against the University of North Texas, the hometown favorite. 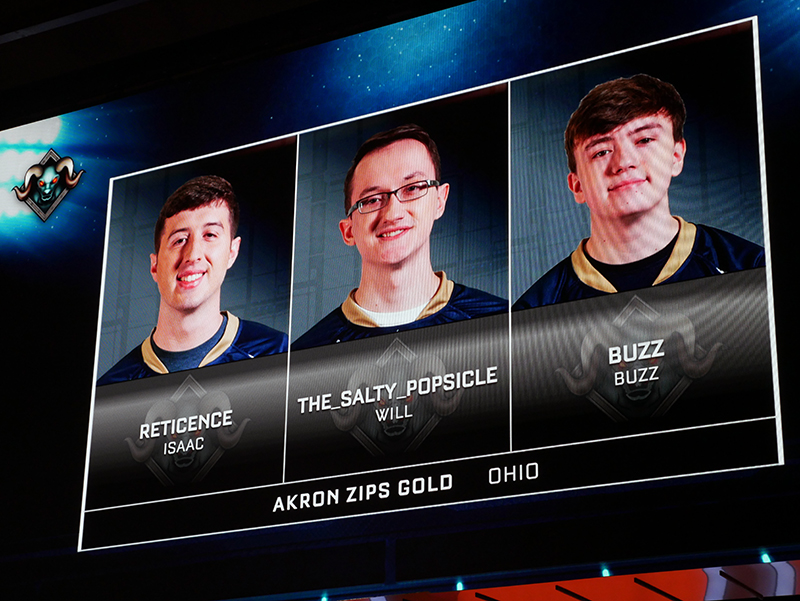 Akron Rocket League Gold player profiles were displayed for the live audience inside the Esports Stadium Arlington in Arlington, Texas. The players are, from left, Isaac “Reticence” Stecker, Will “The Salty_Popsicle” Weiser and Buzz “Buzz” Krager.

“It’s a tremendous testament to the level talent The University of Akron has attracted to see that, within just a few months of knowing each other, the Akron Rocket League squad has been able to place third in the nation among other teams with players that have been together in prior seasons,” said Michael Fay Jr., head coach and director of esports programs at UA. “Thanks to the quality varsity program the University has put together, we’ve been able to build on the unparalleled skill of these players and offer them the support necessary to facilitate their growth into a high-performance team within just a few months. I’m confident we’ve only just begun to see what this team has to offer on the national stage as it continues to grow.”

Akron Rocket League won a total of $7,000 in scholarship money — $4,000 for placing first in the Northern Conference and an additional $3,000 for placing third at nationals.

The Zips found their match against the University of North Texas Mean Green after surviving elimination against Penn State University, beating PSU Esports 4-2 in a best of seven match, which secured a third place at nationals. 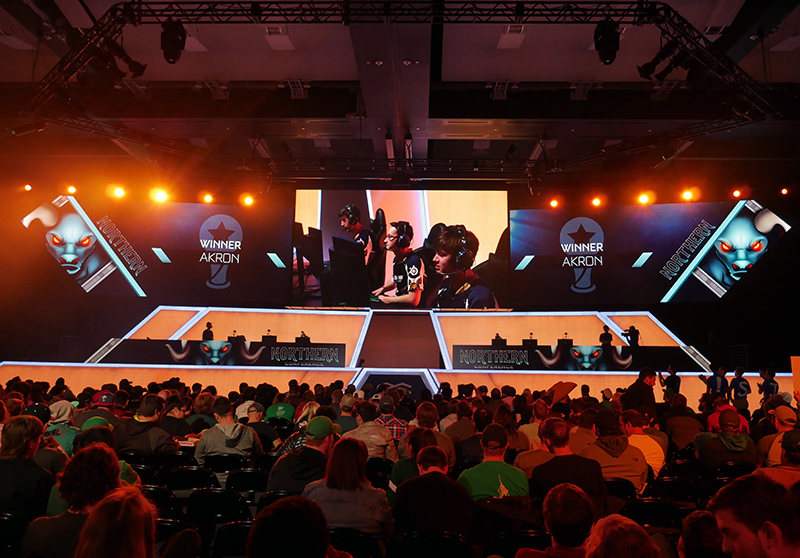 Akron Rocket League players are seen here winning Game 2 vs. Penn State Esports in front of an audience. They are, from left, Isaac “Reticence” Stecker, Will “The Salty_Popsicle” Weiser and Buzz “Buzz” Krager.

The Drs. Gary B. and Pamela S. Williams Honors College is home to UA’s Esports Program.