Engineer and entrepreneur, all in one

Since childhood, Courtney Gras has loved roller coasters — so much so that she dreamed of designing them someday. She figured out, pretty early on, that the best way to do that would be to become an engineer.

Roller coasters twist and turn and so do even the best-laid career plans.

Homeschooled since second grade, Gras began taking postsecondary classes at The University of Akron while in ninth grade. The Aurora resident was in the Honors Academy for Postsecondary Students, which is part of the Honors College.

VIDEO: What Courtney says about her Akron Experience

“I was able to get integrated into the college environment at a very early age and really figure out what I wanted to do,” recalls Gras, who discovered what she calls “an affinity for electrical engineering.”

During her undergraduate years, Gras was a member of the Honors College and College of Engineering robotics teams. She also had five co-op assignments —two at Lockheed Martin and three at NASA’s Glenn Research Center.

“I think the way I really got the most out of my college experiences was by going after opportunities, particularly those that were presented by my professors and my mentors,” notes Gras. “The faculty here are connected very well to industry and your field of study in general, so they have the best ideas for research projects and good challenging projects to work on. I think taking their advice and challenging myself beyond the classroom was really what furthered my career.” 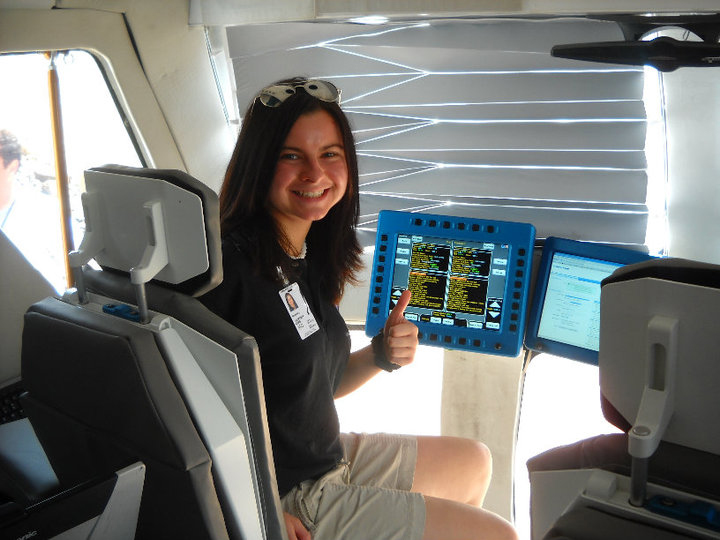 Courtney Gras sits in a pilot seat inside the Lunar Electric Rover during an internship at NASA Johnson Space Center in Houston, Texas.

In particular, Gras credits Dr. Tom Hartley, now a professor emeritus of computer and electrical engineering, for encouraging her to pursue undergraduate research.

Her research, in turn, led Gras on another unexpected path — entrepreneurship.

She and Tom Vo, a graduate student in electrical engineering, founded Design Flux Technologies. The product they developed as students is an integrated hardware and software platform technology for batteries — a first of its kind versatile power management system.

Today, their start-up company is growing and they are able to pay forward the opportunities they received as engineering students.

“We’ve been able to attract outside talent and bring on board a senior executive and CEO, and we’re preparing to release our first product,” says Gras. “The really great thing is that we’re now able to include current Akron students on our team as co-ops and interns.”

Courtney Gras, who joined NASA’s Glenn Research Center after graduation, is now engineering manager at USA Firmware, LLC in Brecksville, in addition to serving as president of Design Flux Technologies.

Incoming Honors College students got their first year here off to an inspiring start when five young alumni returned to speak to them as part of the Honors Leadership Summit. The annual program is hosted by the Institute for Leadership Advancement within the College of Business Administration. The institute, established in 2012 by a $1 million gift from The J.M. Smucker Company, promotes the development of leaders with the unique combination of knowledge, skills and principles needed to make an impact on their organizations early in their careers.

Other speakers in the series:

Capping off the series as keynote speaker was Anthony J. Alexander, president and CEO of FirstEnergy Corporation. He spoke about wise and ethical leadership. He earned accounting and law degrees at UA.

In wide-ranging interviews before their presentations, each graduate talked about the value of his or her UA education. From mentors to motivations, from goal setting to overcoming fear and campus involvement, each shaped an Akron Experience that made them ready for everything that has followed.