When the 2021 Goodyear Executive Leadership presenter, Hyland Software, Inc. CEO and President Bill Priemer, joined Hyland in 1997, it was six years old and had 30 employees. Today, Hyland has 4,000 employees and will surpass a billion dollars in revenue in this year. It’s the largest software company in Northeast Ohio. In his livestreamed presentation on April 7, Priemer talked about his own career, the company’s remarkable growth, and the eight management principles that have made that success possible.

He grew up in Cleveland, went to St. Ignatius High School, then onto Boston College, where he met his wife and double-majored in English and political science. His first job was as a salesperson for a personal computer company, outfitting companies with their very desktop PCs. 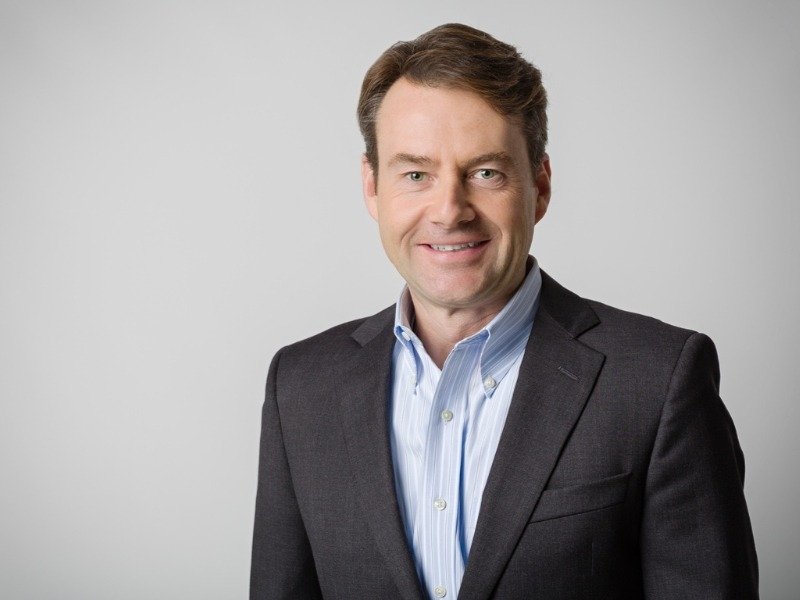 He became intrigued with how competitors Dell and Gateway were bypassing retailers and the dealer channel and selling directly to companies and consumers. He decided to pursue a master's degree in integrated marketing communications at Northwestern University, specializing in direct marketing. That led him to an internship at Microsoft in Seattle during the launch of Windows 95.

“Although I enjoyed the work, I didn't love the culture at the time,” he said.

He turned down a full-time job offer and joined some grad school classmates who were working at FedEx Corporation. His first major project was launching FedEx’s intra-Europe service.

“It was just an amazing experience and illustrated for me the incredible power of teamwork in an organizational setting.”

He liked his job, and he liked living in Memphis. Nevertheless, when childhood friend Packy Hyland called to ask if he would be interested in running marketing for the small software company, Priemer said yes.

“I think at that time, the biggest attraction was that after working for three large companies I was really excited with the idea of working somewhere where I could make a difference and even help shape a company's direction.”

A couple of years later he took over responsibility for sales in addition to marketing, and a few years after that he was promoted to chief operating officer. In 2009 he became CEO.

Hyland’s eight principles aren’t unique to the company, Priemer said. “We didn't even really identify, them until after several years of using them. These principles are easy to say, but in my experience often pretty difficult to consistently practice.” 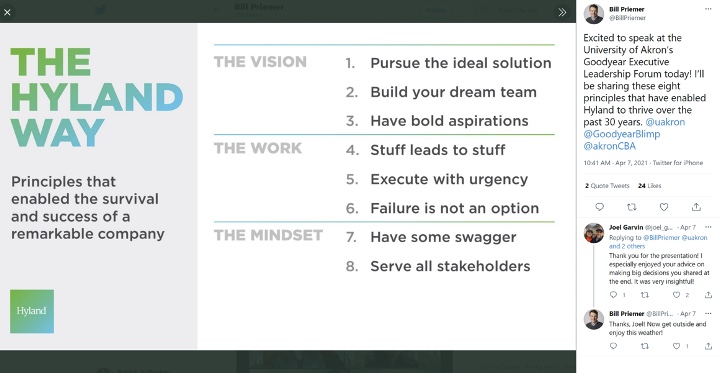 Before he founded the company in 1991, Packy Hyland was doing some computer consulting for a single-branch bank in a tiny town in Wisconsin. The bank was looking for software that could store digital versions of the statements they mailed to customers.

He thought the software then available was too expensive and too difficult to use. Even though he wasn’t a programmer, he decided to develop a program himself. He created a solution that the bank purchased and liked enough to start telling other banks about it. And the company was born.

2. Build a dream team. The second principle was inspired by the 1992 U.S. men's Olympic basketball team. It was the first year that professional players were permitted to compete, so the team was nicknamed the Dream Team. Hyland wanted to build his own dream team. His first three hires were critical to the company’s success. The first one was the CFO until last year. The second one is still chief administrative officer. The third was the chief technology officer for 25 years.

With the size it is today, Hyland needs a pipeline of talent, especially in its headquarters location. So, it’s built deep relationships with local universities, has a robust internship program, and runs all sorts of tech camps, hackathons, and tech outreach programs down to middle schoolers and for inner-city students.

“We’re one of the few companies that I know, especially in technology, that doesn't have a problem filling open roles,” Priemer said.

3. Have bold aspirations. “Almost from the time he started the business, Packy’s goal was to be the world's leading document management software company. Honestly, he had no good reason to believe that could or would become a reality, but he did have everyone in our company believing that it was our destiny. It made us feel that we were part of something special and we became obsessed.”

“And I would say we still are obsessed. The global content services market is projected to grow to more than $15 billion by 2024. And there's no reason that we can't capture a majority share of that market.”

4. Stuff leads to stuff. The company’s first three principals are about establishing the vision. The next three describe how the company goes about doing the work it sets out to do.

“The point of ‘stuff leads to stuff’ is that in business, new opportunities present themselves all the time. Some are exactly what you've been looking for. Others clearly don't make sense. And a lot are going to be intriguing, but the outcome is uncertain. You need to recognize that if you decide not to move forward, that's the end of the line. But if you decide to give it a try, it might succeed, or it might lead you to the next opportunity that will succeed, or you'll learn something along the way, or you'll meet someone who will be key to the next big successful venture.

“This is definitely a principle that we learned along the way, but it's proven true time and time again. In 1995, we were having moderate success selling our software to small banks and credit unions. An independent sales rep who was selling a competitive product called us up and said, you know, I think your product is better. I want to start selling your product instead of the one that I'm currently carrying.

“At the time, we were not planning on establishing a dealer network, but we decided to give it a try. That dealer not only turned out to be an incredibly successful seller of our product, but he caught the attention of the largest provider of core banking software in the U. S. at that time, who decided that they would like to private label our product and upsell it to their existing base – thousands of banks and credit unions. That relationship is really what enabled Hyland to finally become profitable, and it provided the financial resources to expand into markets beyond the banking sector,” he said.

5. Execute with urgency. Companies need to be willing to pursue new opportunities, even when they're uncertain, but it's also vital to devote the necessary time, energy and resources to the opportunities that you do choose to pursue, Priemer explained.

“At Hyland, we’re big believers in a notion called WIP, or ‘limiting Work in Process.’ It’s a core concept in agile software development. Directing your attention to just a few tasks enables you to focus and concentrate and move fast. When you multitask too many things, you waste time switching tasks and trying to recall where you left off. Because we're only working on a few things at one time, we don't have to schedule the next update meeting for two weeks from now. We can schedule it for two days from now, because it's not unreasonable at all to make material progress in the next 48 hours.”

6. Failure is not an option. “When you make a commitment to a customer, you do everything possible to honor that commitment, no matter how long it takes, how much it costs,” Priemer said. He recounted how in 1997 a manager made a commitment to a small community bank in Raleigh, North Carolina, to develop a workflow solution to a problem the bank was having. Hyland couldn’t get it to work. The manager drove to Raleigh and told the bank he wasn't leaving until the solution was working to their satisfaction. He thought he would be there for two weeks but ended up staying for three months. His wife was not happy with him, but Hyland ended up with a satisfied customer and the solution became a major addition to product line.

“The decision to persevere can be tough, but those customers become champions, and we cement our reputation for always delivering on customer commitments. In the world of enterprise software, that's kind of unusual,” Priemer said.

7. Have some swagger. “If you are objectively good at what you do, and if your offering is better than the competition’s, then you're doing yourself and your potential customers a disservice if you do not clearly and confidently articulate that. This is something that California companies seem to readily do, but it's not necessarily a natural inclination for those of us in the Midwest.”

Back in 1998, after the partnership with the banking software company was up and running successfully, Hyland started branching out into other industries. But because that company was private labeling Hyland’s software, neither Hyland nor its flagship product, OnBase, had much brand recognition.

Packy Hyland, the CEO at the time, decided they should spend the entire marketing budget for the year at the upcoming industry trade show. They secured the largest booth in the exhibit hall – an 80-by-80-foot space. Playing off the OnBase name, they built a baseball stadium where show attendees could sit in the stands and watch the presenter on the pitcher's mound demonstrate the software on the giant scoreboard behind him.

“The event was a runaway success,” Premier said. “We were the talk of the show. We met people who would become customers and partners and even employees. I still meet people today who said that they first became aware of us at that event. But that expenditure would have been a waste of money if we didn't have really good software. So, you've got to have something worth bragging about when you want to show some swagger – like maybe putting your name on a blimp.”

8. Serve all stakeholders. “Hyland does not exist primarily to serve our shareholders,” Priemer emphasized. “They're important, but so are our employees and our customers, our partners and our communities. Our mission is to serve all of our stakeholders to the best of our ability. We need to be careful not to cater to one group to the detriment of another, because if we stop supporting any of those constituencies then they'll leave us, and that's going to prevent us from being a great company to the rest.”

The forum concluded with Priemer answering questions from a panel of College of Business Administration students. They asked where he sees the company going in the next two years. How does he create and promote the corporate culture? What impact has the company had on the region? How does he balance the demands of work with his family and personal life? And what steps does he take before making a big decision?

Join the College of Business Administration on April 30th from 8:30 – 10:30 a.m. for the annual Ohio Economic Forum 2021. Keynote speaker Mark Partridge of The Ohio State University and a panel of experts will discuss the topic “Regaining Ohio’s Leadership in the U.S. Economy.”