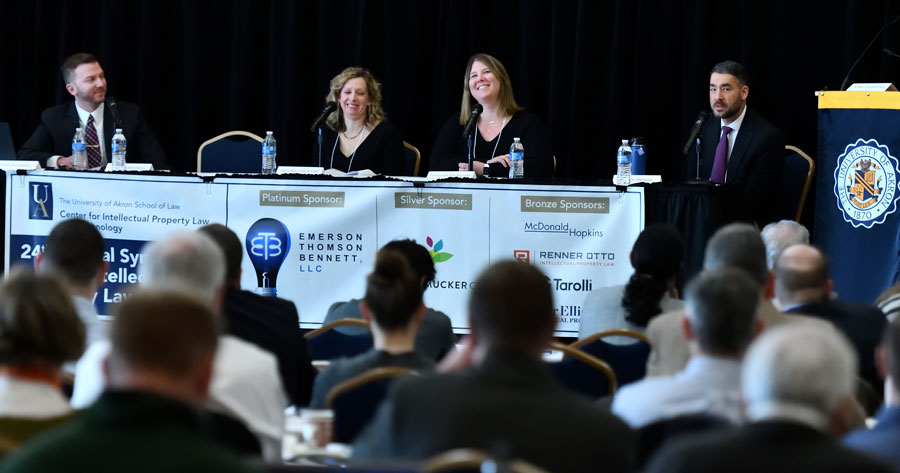 Among the Symposium panels was one on communications between in-house and outside counsel.

There could really only be one topic for the keynote address at The University of Akron School of Law Intellectual Property Law and Policy Symposium in March 2022. The school was fortunate to have a speaker who had a front row seat in the development of the COVID-19 vaccines. 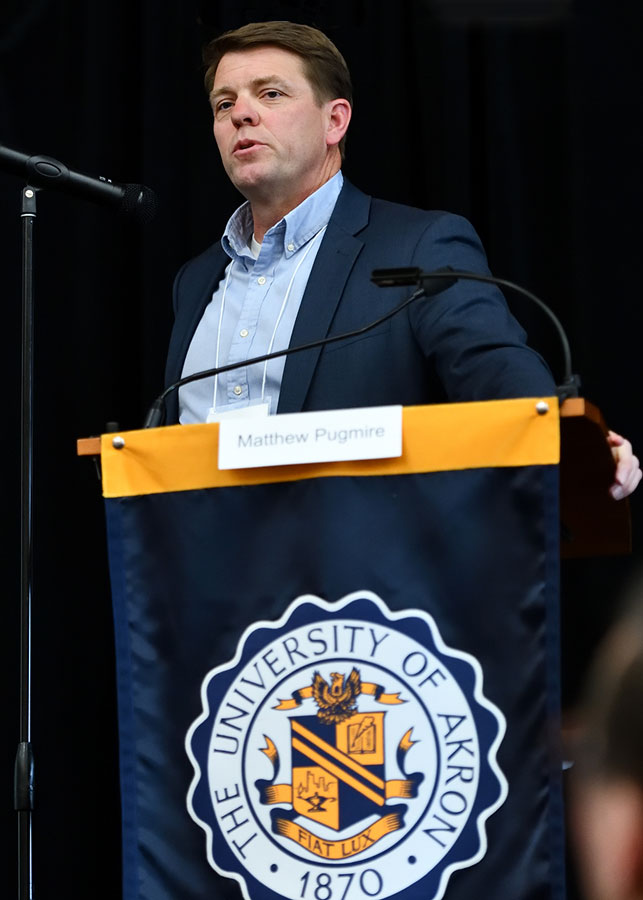 Matthew Pugmire, assistant general counsel with Pfizer, Inc., titled his talk The Role of IP in Biopharma Innovation: Insights from the COVID-19 Pandemic. He spoke at the luncheon during the full-day 24th annual symposium.

In addition to Pugmire, the 100 registrants heard from seven panels dealing with issues such as post-grant review at the Patent Trial and Appeal Board, the Trademark Modernization Act, and best practices for working with inventors.

Pugmire said his thoughts about his topic began with the question, What is the role of IP?

“It’s two-part,” he explained. “To incentivize innovation and to facilitate collaboration. No one would take on the risk of investing so much money where there is so much failure unless you got some temporary exclusivity when you have a product that turns out to work.”

In exchange for the promise of temporary exclusivity, inventors are required to disclose how their invention works. The idea is that this accelerates innovation and promotes competition. Other companies look at what you’re working on, and they may try to build on it, work around it, or collaborate with you.

“The development of the COVID vaccines was the result of 30 to 40 years of incremental innovation and multiple technologies that was available when the pandemic struck,” Pugmire said. “It was only possible because there was a very robust IP system in place.”

The core mRNA technology itself might never have been created without IP agreements that provided the security that enabled startups to bring in venture capital investments.

BioNTech, the company Pfizer partnered with, had developed a lot of the core mRNA technology. But it was a young company, founded in 2008. It didn’t have manufacturing capability and had never brought a product to market. Pfizer was already had working with BioNTech to develop a flu vaccine, so both sides felt it made sense to work together on a COVID vaccine.

“Still, I can't imagine that they would've been willing to just turn over their crown jewels to us if there wasn't some way to protect them through the IP system,” Pugmire said.

And that was just one example. He showed a graphic depicting the complicated and competitive mRNA IP landscape that had to be negotiated. Pfizer collaborated with many different partners, including some of its biggest competitors. They only had the confidence to do so because of their IP rights. 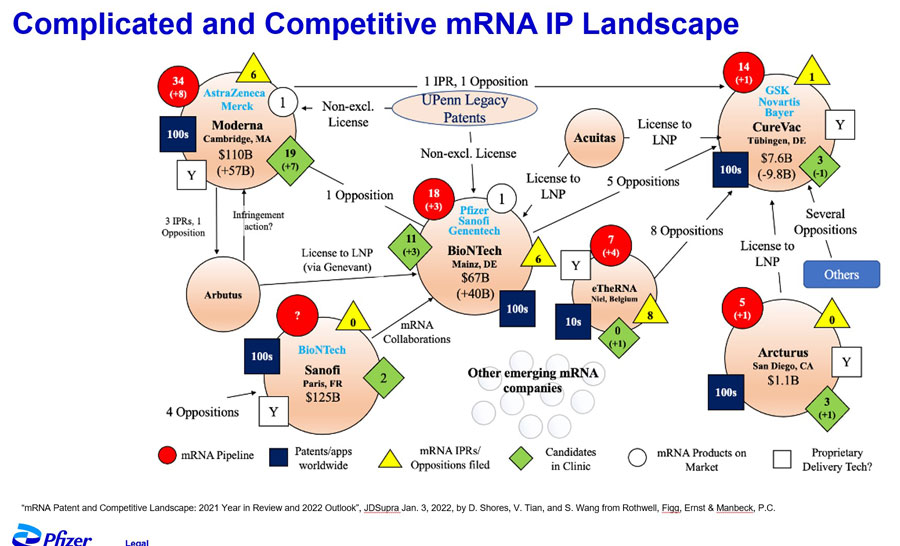 The IP landscape around mRNA was complicated.

As for having a front row seat, Pugmire described 2020 as “crazy.”

“It was around the clock for months. We were testing different versions and we didn’t know which one was going to work, so we just filed on everything. Everybody wanted to publish and get the information out quickly, and we were trying to get the patents filed before all that went out the door. And it was probably even more crazy at BioNTech.”

When the Phase 2B/3 clinical trials got underway at the end of July 2020, Pfizer was hoping to see 75-80% efficacy, Pugmire recalled. “That would've been fantastic. But when the efficacy came back as 95%, people were just overjoyed.”

Although the last two years would seem to have proven the value of robust IP systems, some critics continue to claim IP hinders rather than facilitates.

This criticism is partly due to a lack of understanding of the biopharma industry, Pugmire said. “There are approximately 1,200 biopharma companies in the country. More than 90% of them don’t make a profit. It’s a risky business. Most fail.”

Developing a new medicine takes 10 years on average and costs an average of $2.6 billion. Less than 12% of the candidates that make it to Phase I clinical trials get FDA approval. [And only a handful of those end up as true successes.]

Even as the industry has ramped up vaccine production, critics continue to call for IP waivers—the elimination of IP rights—in the name of access.

But IP has not been a significant factor hindering access. That’s been mostly due to weak healthcare systems, inadequate infrastructure, trade barriers, and physical distribution challenges.

“Here is where we are,” Pugmire said. “Vaccine manufacturers are currently producing more than 1.5 billion doses every month….In a couple of months, total vaccine production could reach 24 billion doses, which would outstrip global demand. There are reports of governments destroying vaccines because of their inability to distribute them within their shelf life.

“Pfizer is working really hard to try to figure out the best way to get our vaccine to some regions of the world where it's really needed. But calling out IP as being the problem just seem not to have a lot of merit.”