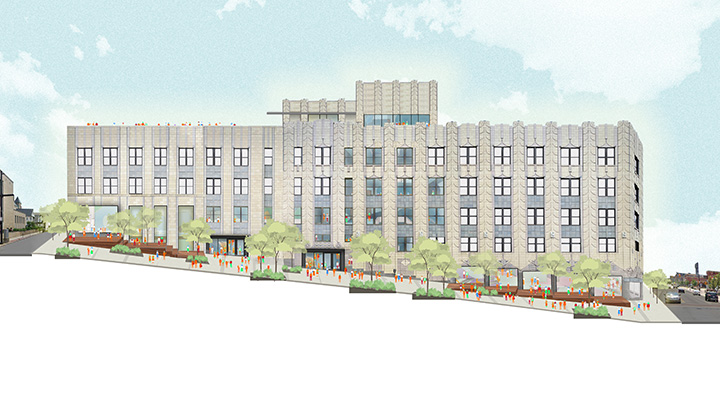 As The University of Akron (UA) strengthens its commitment to the development of the arts within the academic community and through outreach to the greater Akron community, it will be aided by a $20 million investment from the John S. and James L. Knight Foundation to transform The University of Akron’s Polsky Building into a downtown arts and academic destination.

“The University of Akron is deeply grateful to the John S. and James L. Knight Foundation for a legacy of visionary investments in public spaces and civic initiatives in Akron,” said President Gary L. Miller. “Their commitment for creating unique ways for people to connect, learn and grow together as communities is at the core of this support. The Foundation’s significant commitment to the University will advance its legacy by supporting the University’s project to reimagine how an urban university and its city work together to create community and economic prosperity through new configurations of architecture, technology and programming in the downtown space.”

Built in the 1930s, the Polsky Building is a former department store that was known as a premier downtown shopping destination for many years—but it was also a gathering place where the community came together. It has been owned and operated, for educational purposes, by The University of Akron since 1987. It is adjacent to Lock 3 Park, the Akron Civic Theatre, the Knight Stage and a revitalized Main Street corridor, all of which have greatly contributed to Akron’s ongoing improvements. The Knight Foundation has been an active, anchor investor in that revitalization.

The $20 million investment from Knight will be used by the University to open the interior of the building to invite people into a new and dynamic space. The funds will create space for entrepreneurship, community collaboration, artistic performances and learning. The building will be fully equipped with state-of-the-art technology.

“The redesigned building will align directly with our strategy to reorient campus toward downtown, significantly increasing our relationship with the city,” said Miller. “With the support of the Knight Foundation, we will bring to bear our resources as a public urban research university to, once again, convene our downtown Akron community, now with creativity as the driving force.”

“The historical vibrancy and entrepreneurism of this city’s quiet power is harnessed for this revitalization,” Miller continued. “To best reflect the purpose of the building,  advance UA’s AkronArts initiative and honor the mission of the Knight Foundation and the deep dedication it has to our city and region, The University of Akron will rename the building for the Knight Foundation to signal the transformational change in the city.”

“This investment will transform a dormant building into a vibrant gateway that opens the University to Main Street,” said Kyle Kutuchief, director of Knight’s program in Akron. “As a University of Akron graduate, I have seen firsthand how the school is committed to the community. The new building, named after the Foundation, will be yet another step in reinvigorating Akron, becoming a great civic asset for downtown and fostering more collaboration between the University and residents.”

Since 1957, the Knight Foundation has been a valued partner, helping the University extend its impact beyond campus and into the greater Akron community. This gift will surpass Knight’s giving to UA beyond the $50 million threshold, marking the 66th year of significant support.

“Real change in community is made possible by long-term commitment and clear-eyed vision,” said Alberto Ibargüen, president and CEO of Knight Foundation. “Since our founding in 1950, we’ve been committed to building a city of Akron where social and economic opportunities abound because all residents have a voice and are bound together by art and a culture of community. This latest set of investments is testament to our belief in Akron’s future.”

Knight’s investments in the University community also extended to the National Center of Choreography, which was gifted $1.5 million to support the initial five years of the NCCAkron Choreography Prize, which will honor local artistic talent, and to establish an endowment for its ongoing operation.