Ohio’s Pride explodes in size and sound this season 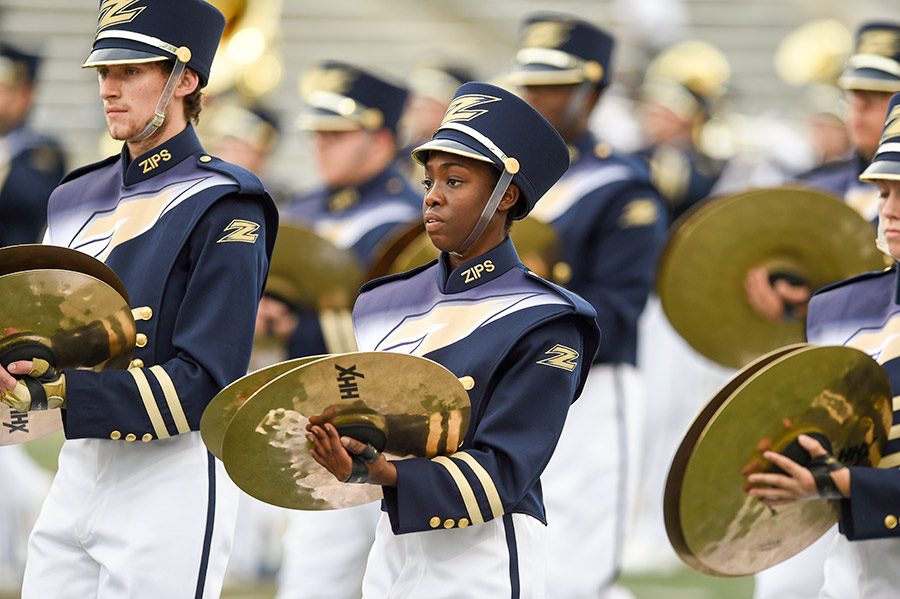 Everyone in step? Check.

As The University of Akron Marching Band — Ohio’s Pride — takes the field this season, Zips fans in the stands will notice dramatic changes, starting with the volume. Not just the sound, but also the sheer number of musicians playing and marching in precise harmony.

“For the Zips formation in the pregame show, the band extends from 10-yard line to 10-yard line,” says Andrew Feyes, who is now beginning his second year of directing the marching band. “Visually, the impact is massive.”

Just as impressive is the band’s look — members are sporting new uniforms for the first time in 19 seasons. The military style jacket features UA’s familiar blue and gold colors, with a contemporary flair. The blue blends from light to dark across the front and incorporates the top part of a gold “Z.” A bolder gold “Z” adorns the top of the left sleeve, which is also blue. The right sleeve is white. The colors make a big impact as the band members turn sharply through maneuvers for the pregame and halftime shows.

Musicians in any major welcome

As an organization, the marching band is every bit as diverse as UA itself, notes Feyes.

“We have students from every college on campus. And, their experiences are just as varied. Most have high school band experience, but not all.” 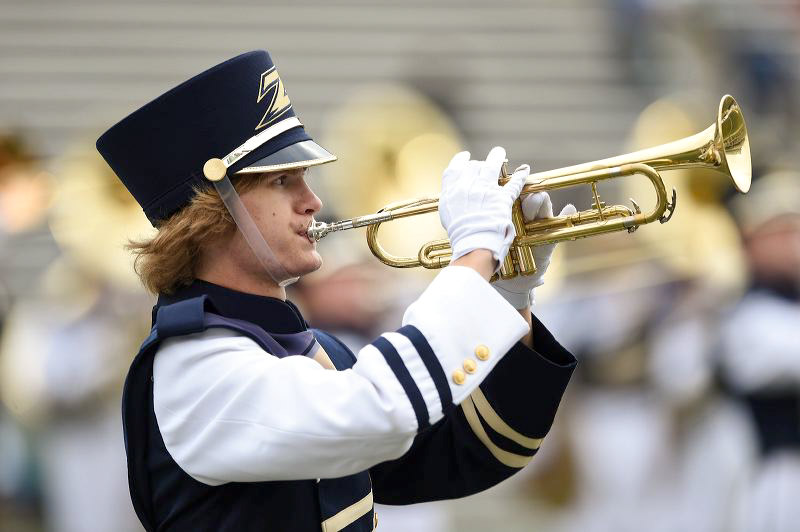 In fact, only about 40 percent of the band is composed of music majors. Another 20 percent are engineering majors, like Zach Proch. Now in his second year with Ohio’s Pride, he brought his trumpet with him from his marching band days at Valley Forge High School in Parma Heights.

“It’s exciting to be part of something where there are so many talented, hard-working individuals,” says Proch, who also is a section leader this year. “There’s such a sense of accomplishment after we finish the pregame shows and again after the half-time shows.”

The band has been growing in recent years, notes Galen Karriker, now director of bands and associate professor of music. He directed the marching band prior to Feyes.

“When I joined the University in 1999, there were a 100 students in the band,” recalls Karriker, who says he’s grateful so many students are willing to make the time commitment. 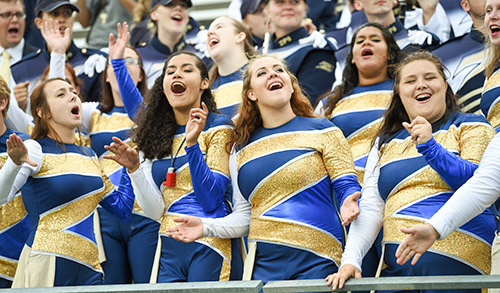 Marching band season begins with a week of band camp right before the start of fall semester. Once classes begin, students rehearse Tuesday, Thursday and Friday evenings. Game days are really long — about 10 hours. The band also performs at two competitions each fall, one hosted on campus.

Band members memorize the majority of the music they perform — from the pregame show, which is the same throughout the season, to a different half-time show for each home game. And then there are all the maneuvers to learn for each show.

Participation in the band fulfills a student’s physical education requirement. And for music education majors, at least two years in the band are required.

Interesting in joining the band? See details and sign up.

For Calvin Miller, no requirement is necessary.

“I’m passionate about it — I just have to do it,” says Miller, who also is a member of the 122nd Ohio Army National Guard Band. “Marching Band gives me the opportunity to be part of something greater than myself. I really enjoy it.”

For the first time this year, band members who successfully complete the season will receive a $1,000 stipend, up from the $100 to $200 of past years.

“The increase in stipend is welcomed by our students, considering the amount of hours they spend in rehearsal and performance,” says Karriker.

The band’s growth spurt this year has led to some interesting challenges for Feyes as he writes music arrangements and drill maneuvers for Ohio’s Pride.

Both Feyes and Karriker agree that the members of Ohio’s Pride fulfill a greater purpose.

“The members of the marching band are ambassadors for The University of Akron in the ways they demonstrate their pride in the institution,” notes Karriker.

That’s certainly true for James Gates, who came to UA from his native New York to major in music education. A member of the Honors College, Gates is in his third year of playing trombone with Ohio’s Pride, where he is a section leader as well.

I love being in the band,” says Gates, whose high school did not have a marching band. “There are 250 other people on the field with me this year, and we are all working together to create something amazing. It truly is a fantastic experience.”

His favorite memory of his time in the marching band so far?

“There was one game where it was so intensely cold that all our instruments froze, so we sang our pregame and halftime shows,” says Gates. “We were there to support the team. It was really cool.” 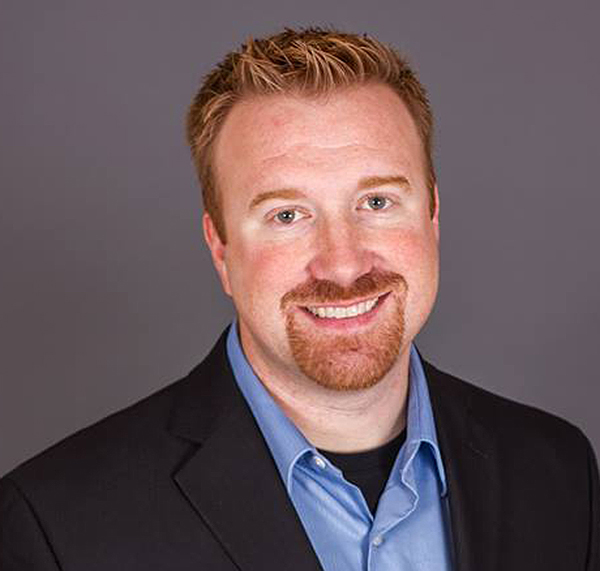 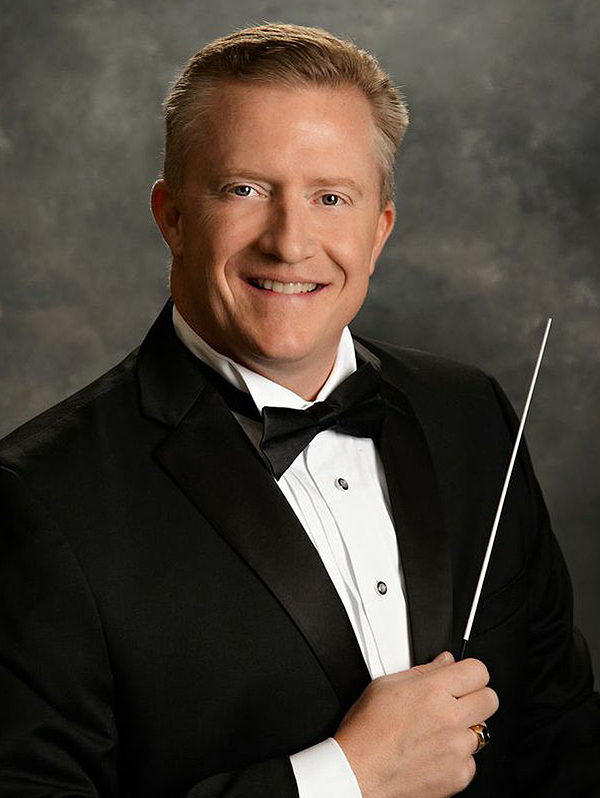