The University of Akron Speech and Debate Team was named the winner of the 2019 Ohio Forensics Association State Championship tournament. The intercollegiate competition, held Feb. 15-16 at UA, featured speech and debate programs from institutions throughout the state. This was UA’s fourth consecutive win.

Of the 15 individual championships at the event, our students won 10. Senior Nathan Hill, the team’s captain, was state champion in trithon for the third year in a row. The trithon is a special category designated for students who are entered in events showcasing all three categories of public speaking — limited preparation speaking, public address speaking and oral interpretation of literature. 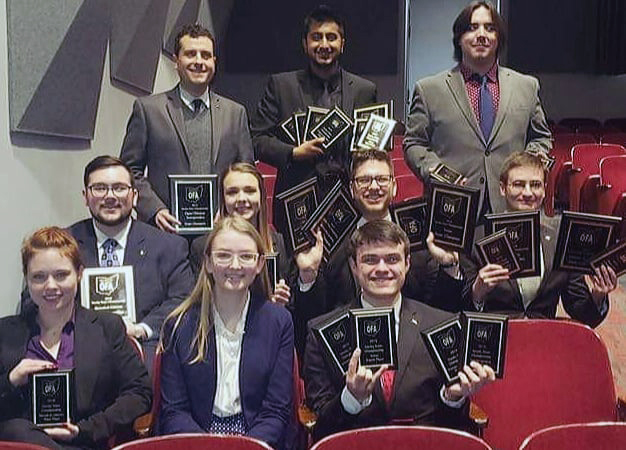 “Our students were well-prepared,” said Mark Rittenour, professor of instruction in our School of Communication and director and coach of the team. “They were focused, hard-working and purposeful in the months and days leading up to this victory. The students masterfully showed our team’s quality-over-quantity approach, and that was reflected in their scores.”

Students begin preparing for the seven-month-long intercollegiate speech and debate season at the end of the summer and beginning of the fall semester. Now that the team has won the state tournament, the students will turn their energies toward national tournaments, notably the Interstate Oratorical Association national oratory contest. It is the oldest continuously running national speech tournament in the United States, held at West Chester University in West Chester, Pa.

“Nationals is the culmination of our season, and the students’ successes at the state level are indicative of great potential at the national level,” added Rittenour.

The Speech and Debate Team will also represent UA at three other national competitions in March and April. Students have qualified for the American Forensic Association National Individual Events Tournament, to be held at the University of Alabama in Tuscaloosa, and the National Forensic Association National Speech and Debate Championship Tournament, to be held in Santa Ana, Calif. But first up for the Zips is the National Speech Championship at Oakland University, in Rochester Hills, Mich., next month.

For more information about the UA Speech and Debate Team, contact Mark Rittenour at mritten@uakron.edu or 330-972-2459.