Soon-to-be University of Akron graduate Kevin J. Karas has been named a 2015 Newman Civic Fellow by Campus Compact — a national coalition of more than 1,100 college and university presidents committed to fulfilling the public purpose of higher education. 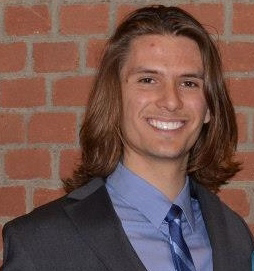 Karas, an honors student who was nominated for the award by UA President Scott L. Scarborough, will receive an interdisciplinary degree in May — a B.A. in Human Motivations, along a minor in conflict management and a Certificate in Leadership Advancement. He is one of six students from Ohio, and one of 201 nationally, to be named a 2015 Newman Civic Fellow for their leadership and service.

“These students represent the next generation of public problem solvers and civic leaders,” notes Campus Compact Board Chair Richard Guarasci, president of Wagner College in New York. “They serve as national examples of the role that higher education can — and does — play in building a better world.”

Learning in class and through service

During his years at UA, Karas has touched many lives through involvement in civic and service learning activities such as Alternative Spring Break, Make a Difference Day and World Change Coalition. He also helped lead students on a project for the Knight Cities Challenge to promote civic engagement and attract and retain talent in our region.

“His interdisciplinary major provides him with a structure for understanding the needs and issues of our society, and trying to get to the heart of what is important and how we can add value to our work,” noted Scarborough in his nomination letter.

Grateful for the nod, Karas says he will “use my new connections with other civic leaders and organizations throughout the United States to find solutions to identify and effectively solve the conflicts our society is facing today and in the future.

“I also intend to use the leadership skills I have developed to create positive changes that will affect our world by improving the quality of life we experience in the workplace and in our own personal lives,” adds Karas, who plans to earn a graduate degree in UA’s College of Business Administration while launching his own meditation/wellness/conflict transformation company in Akron and publishing a book on mindful student leadership.

The Newman Civic Fellow Award was named to honor Frank Newman. A leader in higher education for decades and an advocate for educating students to be active citizens, Newman helped to found Campus Compact in 1985. The KPMG Foundation generously sponsors the awards. Learn more about Campus Compact.