The name NASA conjures in one’s mind images of space suits, gleaming rockets and history’s most daring missions. The next generation to pioneer future journeys to the final frontier could be The University of Akron’s own Akronauts team, which was selected last year by NASA to compete in its 2019 Student Launch Competition in Huntsville, Ala., April 4-6. 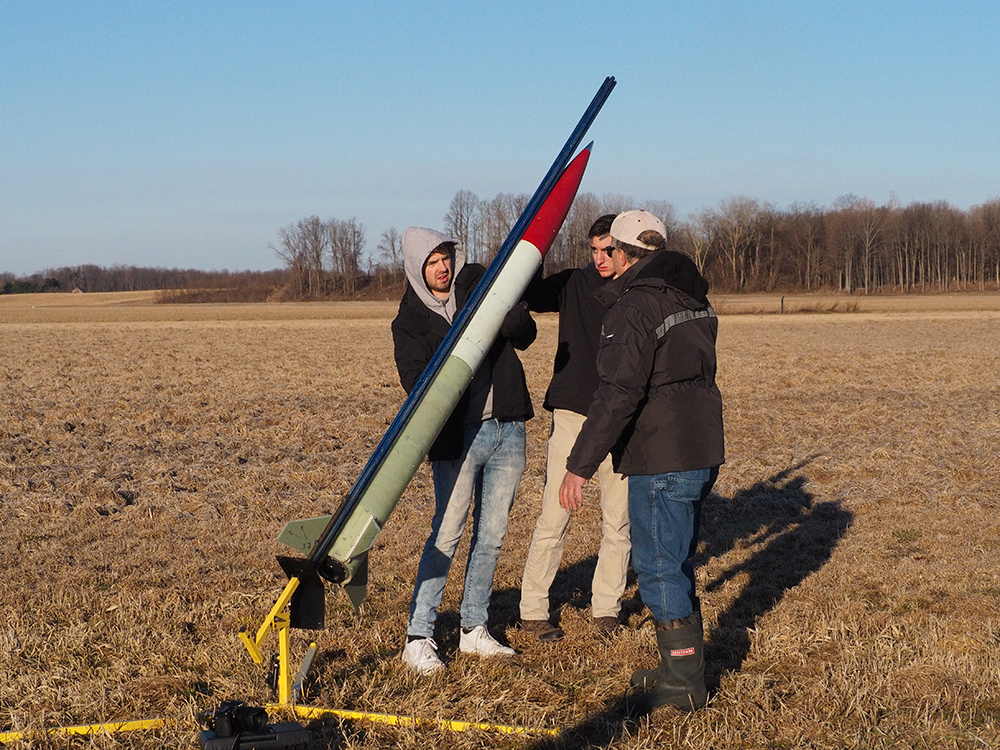 Akronauts Adam McElfresh (left) and Matthew Reppa, along with Chris Pearson, the team’s mentor, load their rocket onto the launch rail, which keeps the rocket going straight as it initially builds up speed. The tall rail has to be folded down for the rocket to be placed on it, then re-erected so the rocket is vertical for launch. This test launch was held at the National Association of Rocketry field located in Amherst.

The Akronauts, the College of Engineering’s student rocket-design team, is one of four university teams from Ohio that will be participating in the competition, which aims to provide relevant research and guidance in the development of a payload and an airframe to carry it. The 91-member team is led by sophomore aerospace systems engineering student Matthew Stanko of Kittanning, Pa.

RELATED: Watch videos about the Akronauts and previous test launches online to learn more about the team.

"Though we have participated in the past, it is as much of an honor as ever to be accepted into a competition as prestigious as the NASA Student Launch Competition,” said Stanko. “This year, we are striving to improve upon what we’ve been learning in our short time as a design team. With the total success of all three test launches, we are more energized, and ready to conquer this competition.” 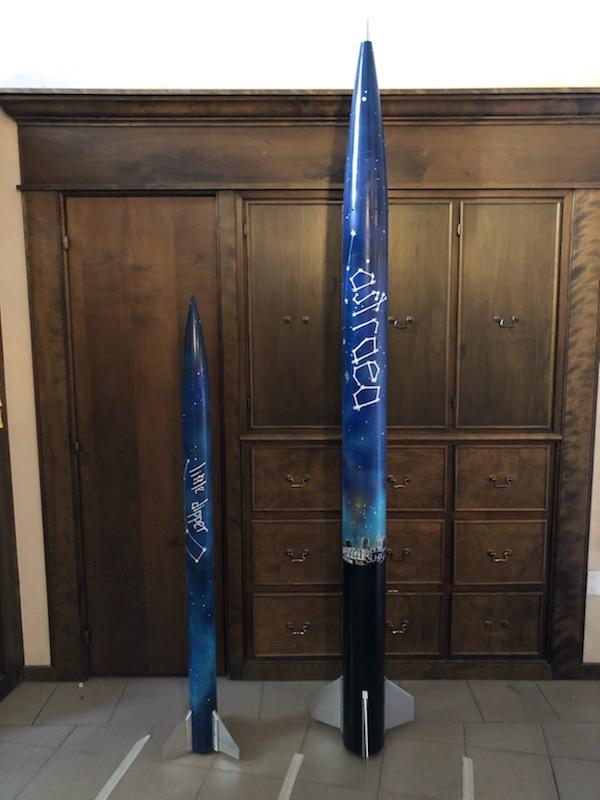 The Akronauts’ preliminary design, named Astraea (pictured right), will reach heights of 4,900 feet. The team worked with Mac Love at Art X Love in Akron to have a custom paint job that will capture the essence of the rocket, the Akronauts and the city of Akron. The smaller rocket on the left, named Little Dipper, was the team’s subscale test rocket.

UA’s application included a 90-page report detailing technical designs, project plan, budget, safety mitigation and educational outreach — all of which had to be done before the real work on the rocket started. Since then, team members have been working tirelessly to design, fabricate, test and construct their competition rocket. The challenge will be held near NASA’s Marshall Space Flight Center . More than 50 middle school, high school and college teams from around the U.S. will be represented.

The Akronauts’ selection for the competition in October was only the beginning of an eight-month process guided by NASA to design and build a rocket that will outperform other student rocketeers. Teams will earn points for their rocket’s performance, and will be judged on altitude, payload and other factors, which ultimately determine the winner.

“The Akronauts rocket team is only in its fifth year and it has quickly become a competitive team nationally,” said Dr. Frank Loth, faculty advisor and mechanical engineering professor. “In addition, the team puts in many hours working with K-12 students to educate them about rockets as well as to explain the excitement that comes from learning about science.”

The Akronauts’ preliminary design, named Astraea, will reach heights of 4,900 feet, with a body just under 9 feet long and weighing 45 pounds, impressively light for its size. Other than the motor, the entire rocket was developed and built by the Akronauts, including the parachutes.

This year NASA introduced a new performance measure to the competition. Instead of aiming to be the closest to 1 mile above ground level as in years past, teams will predict before launch day how high their rocket will fly. Rockets must fly between upward of 3,500 and 6,000 feet to receive altitude points.

This isn’t the first time the Akronauts have reached for the stars. Two years ago, the team’s Zaphod rocket design snagged 13th place overall. Considering that the team was established in 2014, the Akronauts are positioned to dominate the competition.