Many animals use elastic energy storage to produce extremely rapid motions. Think of chameleons with their super-fast tongue, or fleas with their springy legs allowing them to jump incredible distances. In both cases, the energy is stored within the animal’s body.

By contrast, it was long held that only humans store energy outside their body in an external tool, such as a bow, slingshot, or catapult.

But then a group of researchers at The University of Akron found what they believe is the only known case of a nonhuman utilizing an external device for increasing velocity and acceleration (otherwise known as “power amplification”) — the triangle weaver spider (Hyptiotes cavatus). This amazing arachnid uses its web like a catapult, loading multiple cycles of muscular contraction and then flinging its own body and the web forward to entrap prey. 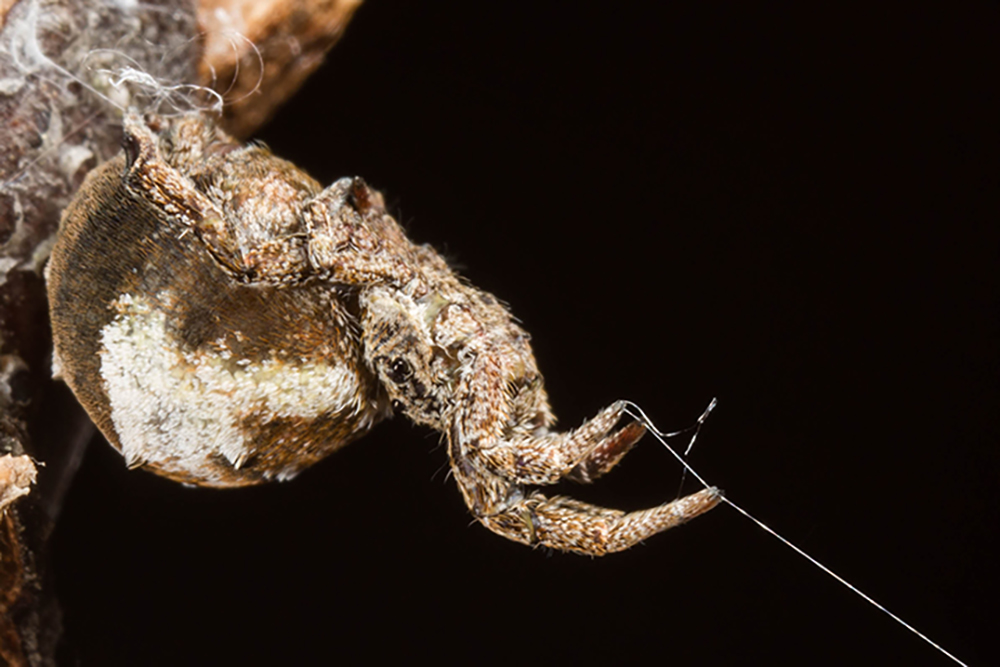 In this close-up image, you can see how the spider anchors the line with its back legs, stretching and tensing it for maximum flinging power. — Photos by Sarah Han/University of Akron.

“Muscle has built-in limits on speed and power, but the recoil of elastic structures can exceed these limits," explained Astley, biologist and researcher in the study.

The spider taps into the elasticity of its webbing to augment its own power, creating “much larger forces and therefore much larger acceleration,” said Maksuta, physicist and co-author of the study.

To determine the speed at which the spider launches itself, Han, entomologist and lead author of the study, and her colleagues analyzed high-speed videos of the spider’s web kinematics during hunting.

This rice-sized spider first constructs a triangle-shaped web and, using its back legs to pull on a silken anchor string, tightens the web by pulling it backward and storing elastic energy — pulling the web tighter and tighter, until it is taut and trembling with stored-up energy. The spider waits in this position, holding the web like a bowstring, for hours or even days. 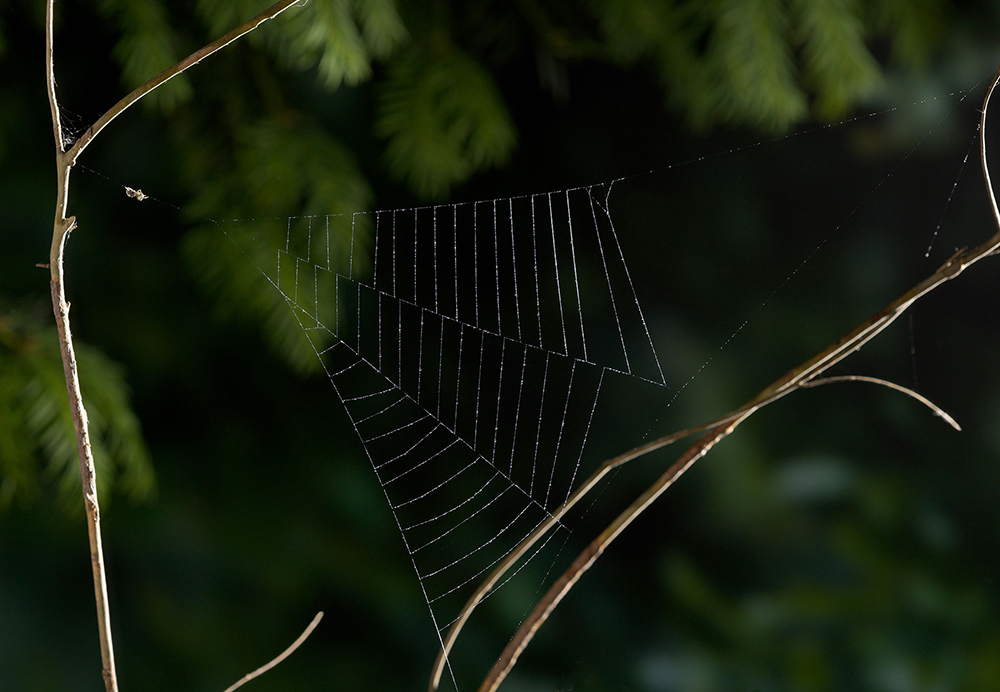 The triangle weaver spider (Hyptiotes cavatus) is named for the shape of its web, seen here.

“When it senses prey hitting the web, it releases its legs from the back line,” explained Han. “And this causes the spider and the web to spring forward with that release of energy, as if you had stretched and released a rubber band.”

They were recording all of this with high-speed video cameras, Han continued, adding that they used “motion tracking software to get the position data, and from that we can get things like velocity and acceleration.”

The video footage revealed that the webs store a staggering amount of energy. When the spider lets go with its back legs, shooting itself like an arrow toward its tangled prey, it accelerates up to ten times as fast as the most powerful frog jump. The explosion of energy, shuddering through the silken threads, causes the web to crumple and collapse around the prey.

“The rapidly moving web tangles around the prey insect, starting the capture process from a distance,” said Han.

When the spider slams to a halt, like a bungee jumper at the nadir of his fall, it recoils, pulling back the web and further enshrouding its victim. Then, grabbing the connecting thread with its back legs, the spider draws itself back, reloading itself like a stone in a slingshot, and launches again at the struggling insect. The spider repeats this process several times, until it is ready to feed.

One advantage of using its web as a tool to thoroughly entangle a snared victim from afar is that “it doesn’t have to encounter prey that might hurt it in a struggle,” said Han, since the spider can rapidly incapacitate its prey without running the risk of physical confrontation. It might have evolved as a strategy because this species of spider has no venom with which to immobilize its victim.

The technique could even have the added benefit of helping spiders avoid their own predators, allowing them to springboard away from an oncoming attack, says Blackledge, entomologist and researcher in the study.

This unique group of researchers is part of UA’s Biomimicry Research and Innovation Center (BRIC), a cross-campus network of faculty, staff and students dedicated to catalyzing innovation by facilitating the interdisciplinary exchange of ideas around biomimicry. Han and Maksuta are Biomimicry Fellows in UA’s Integrated Bioscience Ph.D. program. In the first-of-its-kind Biomimicry Fellowship Program, co-launched by BRIC and Great Lakes Biomimicry in 2012, UA doctoral students advance biomimicry initiatives at sponsoring organizations via industrial assistantships. Han is sponsored by Goodyear Tire & Rubber Company and Maksuta is sponsored by Kimberly-Clark.