The impact of performance art exhibition

International artists Kristine Kenmochi and Katia Kush will be exhibiting their multimedia videos with sculptural elements and costumes from these films at The University of Akron Myers School of Art Emily Davis Gallery, Lower Gallery, from Oct. 1-31. The opening reception is scheduled Thursday, Oct. 1, from 5 to 7 p.m. 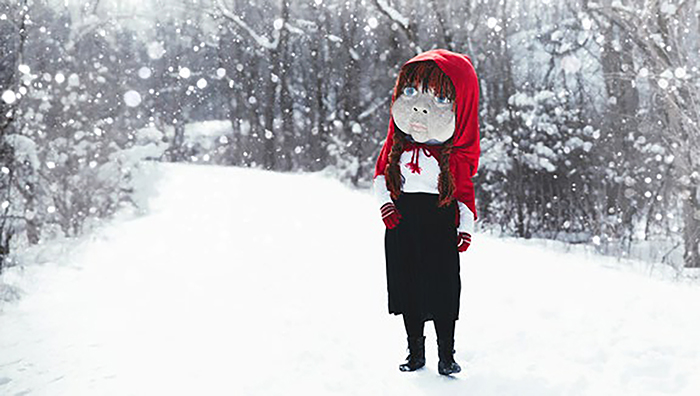 A scene from “Little Red.”

During the winter of 2014, Kush and Kenmochi visited Akron and began collaborating on two films, parts of which were filmed in area metro parks. Kenmochi noted that she is excited “to bring this work back to the original location of shooting.” Both artists mentioned that they were eager to see how the Akron audience would interact with the themes of their films.

Their performance-based work engages the audience in storytelling. The display of sculptural heads, costumes and masks will provide a glimpse into how their work is developed expanding upon viewers’ understandings of their creative practice.

Additional works include three videos produced for the music groups INK, “Ink goes on” and “Try what you don’t know,” and Louis Watson, “Window.”

Kenmochi and Kush began working together while in college in London, England. Since then, they have collaborated on projects that break media boundaries between the fine arts, entertainment and communications. Kenmochi currently lives in Los Angeles and Kush resides in London. Kush will be interacting with the audience via Skype during opening night reception. To learn more about their work, visit their websites: Kristine Kenmochi and Katia Kush.