Trivia Man: UA alum, employee to appear on ‘Who Wants to Be a Millionaire’

What would you do with a million dollars? Buy a fancy car or a new house? Pay off debts? Invest it?

If Derek Daily suddenly became a millionaire, he’d take some time off from his position in Career Services at The University of Akron and hike the Appalachian Trail.

“It’s been a goal of mine for a long time,” said Daily. “I need a big kick in the butt to actually go and do it. Winning a million dollars would be the kick!”

We’ll soon find out if Daily will get that “kick” he needs. Daily will be a featured contestant on “Who Wants to Be a Millionaire?” hosted by Chris Harrison on Thursday. 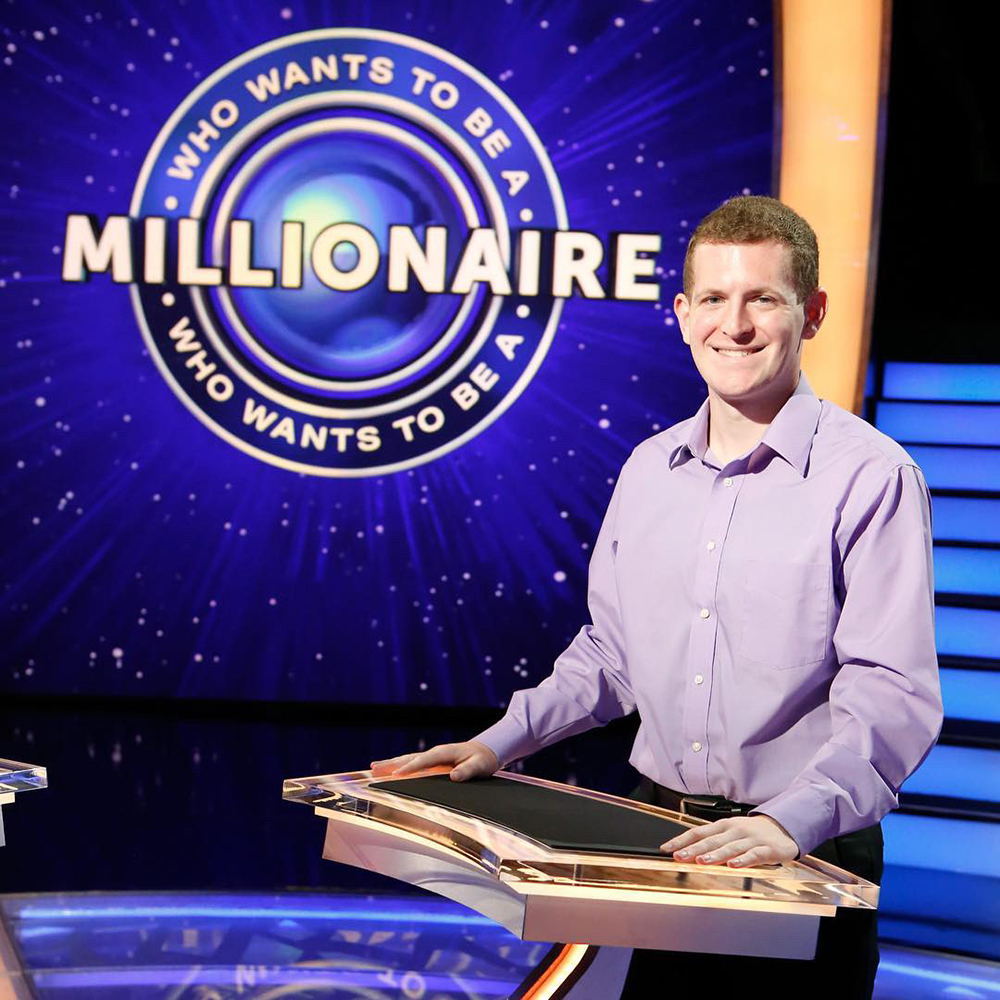 Here's Derek Daily on the “Who Wants to Be a Millionaire” set.

“It’s been very hard to keep my winnings a secret,” said Daily, who is sworn to secrecy. “The only people who know how I did are the people who were at the taping. It will be a relief to finally talk about it. I taped back on Aug. 8, so it’s been hard to not talk about my experience for eight months!”

Daily, a coordinator in Career Services, serves as a liaison for the LeBron James Family Foundation College of Education. He’s a third-generation UA graduate, having earned his bachelor’s degree in English in 2015 and a master’s degree in higher education administration in 2018.

And, he’s a huge fan of game shows.

“I started watching them with my grandmother when I was really little,” Daily said. “It’s really become a lifestyle for me – a lot of my life revolves around trivia and learning new things. I have been watching “Millionaire” since it first premiered, and I had the opportunity to audition when I went to Las Vegas for a trivia convention, of all things.”

“Who Wants to Be a Millionaire” is the third quiz show on which Daily has been a contestant. In high school, he appeared on “Academic Challenge,” where his team qualified for the season championship in 2010. In 2013, he appeared as a contestant on Game Show Network’s quiz show “The Chase.”

Third time is a charm

Auditioning for “Who Wants to Be a Millionaire” is nothing new to Daily. He’s done it twice before (in 2011 and 2014), finally making on the show after the third try. To qualify to be a contestant, hopeful millionaires are required to pass a 30-question quiz and then successfully navigate several auditions with the show’s producers. Unlike his previous two in-person auditions in Toledo and Philadelphia, Daily auditioned for this year’s episode last May via Skype. He didn’t know he would be selected as a contestant until a week before taping in August – when the producers recognized him at the studio as he waited to watch his friend be a contestant on the show.

“I’d been studying for several years, so I was really ready,” said Daily. “To prepare, I watched every episode over the past two seasons. It’s a bit harder to study for ‘Millionaire’ than other shows because the questions can be fairly obscure, especially at the higher money levels. A lot of it is just luck. The best way to prepare is to not just watch the show, but thinking about playing the show — things like when to use a lifeline, when you’d be willing to walk away and when you’d be willing to go for it, and talking out the answers.”

Contestants on the show are challenged with 14 multiple-choice questions of varying degrees of difficulty. Each question has an assigned dollar value that increases in amount from $500 to $1 million. Contestants are allowed to choose from three lifelines if they’re stumped on a question – Fifty-Fifty (two possible answers eliminated), Ask the Audience (consider which answer the studio audience believes is correct) and Plus One (get help from a companion who can answer the question).

“My Plus One is my friend Mike Manos, who is from Elmira, New York,” said Daily. “I first met Mike online through a game show community about eight years ago, and we see each other about two to three times a year at various trivia events. As a side job, Mike is a trivia host and DJ, so he was my first choice to be my Plus One. He also writes his own questions, so I figured he’d have a good breadth of knowledge.”

Daily’s episode of “Who Wants to Be a Millionaire?” will air in Northeast Ohio on Thursday, April 11, at 3 p.m. on ABC.