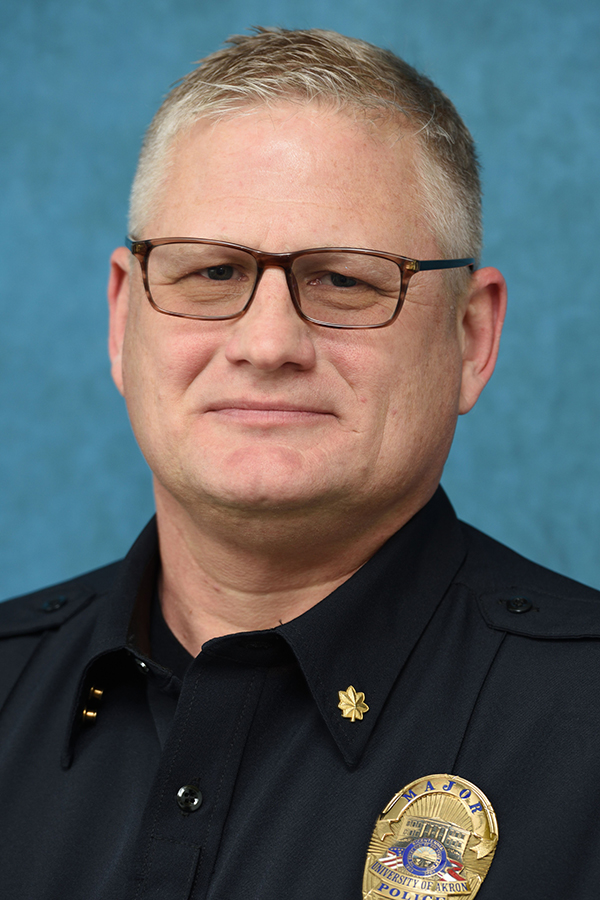 University of Akron Police Major Dale E. Gooding Jr. will become chief of the department on July 1. The 20-year veteran of the force, who currently serves as assistant chief of police, has spent the majority of his law enforcement career here on campus.

Gooding will succeed James P. Weber, current chief and assistant vice president of campus safety, who is retiring on June 30 after 30 years with UA.

In his upcoming leadership role, Gooding will oversee a force of 34 officers and a civilian staff of 10. Fully commissioned by the state of Ohio, UAPD officers have law enforcement authority identical to municipal police officers and sheriff's deputies.

“Our officers are focused, committed and well trained,” notes Gooding. “And, we work hard to  have  outstanding relationships with the city of Akron’s police force, the Summit County Sheriff’s Department and the Ohio State Highway Patrol, given its presence on our campus. It’s a team effort; it has to be, to be able to achieve our mission of keeping the campus and adjoining areas safe around the clock.”

Gooding says he chose law enforcement as a career at the urging of his brother and brother-in-law, who had both chosen it for themselves. He graduated from UA’s Police Academy in 1995 and worked as a deputy in the Stark County Sheriff’s Department from 1996 to 2000, when he left to join the UAPD. Gooding is an alumnus three times over — he earned an A.S. in Criminal Justice in 2005, a B.A. in Sociology in 2007 and an M.A. in Urban Studies in 2009.

While rising through the UAPD ranks, Gooding also graduated from the Police Executive Leadership College in 2005, the Great Lakes Command College in 2010 and the FBI National Academy #249 in 2012.

“Dale has all the attributes we look for in the leader of our safety efforts,” says Nathan Mortimer, vice president of operations. “He has served in the department since 2000 and he has been second-in-charge for five years. Dale really puts students first in his work, and he has demonstrated over the years the judgment, the acumen and the leadership qualities we need to ensure we're providing the safest possible environment for living and learning."

In looking ahead, Gooding acknowledges there are challenges for everyone working in his field.

“Ethics, civility and community partnerships are all very important to what we do, and what we will continue to do.”

During his time as chief, Gooding expects the department to be growing.

“Our core group will be changing,” he says. “We have some retirements coming up, some promotions and some new people being hired. I want to be sure the department is situated well for the future.”

Gooding plans to continue his routine of getting out of the office to take walks around campus. “I’ve been here so long and I know so many people, it’s almost like family,” he notes. “It’s important to keep those relationships alive."

“I’m proud of The University of Akron,” adds Gooding. “Everyone who works here has a common goal to see that our students have the best education possible and cross our stage at graduation feeling that they have had a good experience here.”