What do a bassbot, shooting gallery, firebot and foosbot have in common? The four robots — designed by University of Akron electrical and computer engineering students — were winners of the 2012 RoboGames, placing first, second (shooting gallery and firebot both earned second-place awards) and third, respectively. 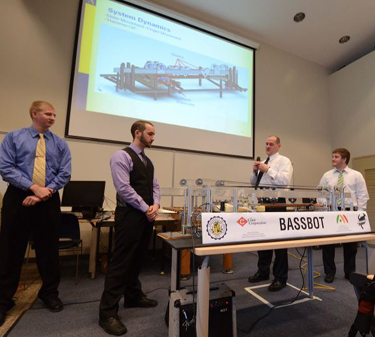 Dubbed the Olympics of Robots, the RoboGames, held in San Mateo, Calif. April 20-22, showcased the innovation and skill of professional and student electrical and computer engineers from across the world.

"Online, we saw a lot of robots that play guitars pneumatically and they are loud and sound like harpsichords," says team leader Preschel. "We knew we could improve upon that and make one sound more 'human.'"

Both the bassbot and foosbot teams were interviewed by NBC and Wired Magazine, according to Tom Hartley, professor of electrical and computer engineering. "I have never received as many positive comments about our students and our program as [I did] this weekend," Hartley says.

In all, 19 UA students participated in the competition with nine robots exhibiting the prowess of the University's engineering students on a global stage.

"The Department of Electrical and Computer Engineering encourages students to get involved in these types of events. It's really what sets Akron apart from all other engineering departments in Ohio," Prechel says. "No other school is as involved or successful as The University of Akron."