The English Romantic poet William Blake claimed that all art proceeds from “vision,” the ability “to see a world in a grain of sand, and a heaven in a wild flower.”

Although Boston sculptor David Tonnesen may not have seen heaven in the allium flowers in his backyard, he saw the seeds of the “Double Bond,” a 20-foot-tall, freestanding steel sculpture at the east end of the Student Union, near the bridge between Auburn Science and Engineering Center and Schrank Hall.

The vision for “Double Bond” was presented to a University of Akron selection committee in 2010 with a proposal that, appropriately, reads more like a poem than a blueprint:

“The barbs of a feather,
The helix of a horn,
The tendrils of a vine,
…thousands of leaf-like points…tree-like majesty”

That haiku-like vision, three years in the making, was realized earlier this month with the completion of Tonnesen’s representation of a chemical bond.

Tonnesen, selected from a pool of more than 80 applicants nationwide, was commissioned to create a work of art representing elements from biology, says James C. Haskell, director of campus planning and space utilization. “Double Bond” was funded by State of Ohio capital support through the Ohio Percent for Art program, a state law requiring that one percent of state construction and renovation project funding be allocated for public art work – in this case, the Auburn West Tower Rehabilitation Project.

The sculpture represents a kind of chemical bond called a double bond, in which two chemical elements are bonded by two pairs of electrons. Specifically, Tonnesen based his sculpture on the molecule ethylene, or ethene, a double bond composed of two carbon atoms and four hydrogen atoms. Ethylene, he points out, is a natural plant hormone, involved, for instance, in the ripening of bananas and the opening of flowers. 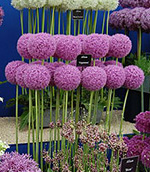 Which is appropriate, for Tonnesen remarks that it was a flower — the allium flower, with its long, slender stem and globe-shaped, “starburst” bloom — that inspired him.

“There’s a courtyard in my loft complex, and I tripped over these alliums growing there one day, these flowers with a straight stalk and big, starburst head — like exploding fireworks — and it really made me think, it would be cool to make a giant one of these,” he says.

From the concrete base of the sculpture rises a helical “trunk”—rusted COR-TEN steel that, over time, will take on the plum and mahogany tones of surrounding bricks and buildings and trees, Tonnesen says.

“I wanted something to seem like it was growing and fluid and almost alive, that would pick up the colors of buildings, brick, fiberglass walls…and the whole thing, I imagined, would look like a stalk or tree with a canopy of flowers or leaves that happens, also, to be a molecule,” he adds.

A large, shiny sphere, representing a carbon atom, is fitted atop this trunk, or helix — which also, by design, resembles rib bones and the quills of a feather; and around the trunk are twined three curling rods — tendrils, vines, stems, or veins — which coalesce and prop up the other “carbon” sphere. Attached to each “carbon” sphere are two smaller, “hydrogen” spheres — and from these silvery globes radiate 200 stainless-steel stars, each movable, shimmering in the sun and shaking in the wind, “reflecting the colors of the sky, of buildings, asphalt and grass,” Tonnesen says. 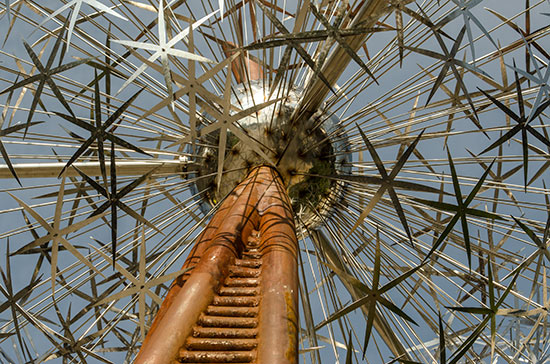 Much of Tonnesen’s art is “kinetic,” meaning it moves, often in the breeze. His 45-foot, giant cod fish sculpture, poised atop a building in Boston Harbor, has scales that rotate in the wind, sending a signal to the fish’s eye, which flashes and changes color according to wind speed, alerting those steering boats into the harbor. It is perhaps the best example of Tonnesen’s commitment to “form and function,” as he calls it, art that is both beautiful and functional.

Early in his career, Tonnesen — whom one might call the Michelangelo of metal — specialized in functional, steel sculpture, such as light fixtures and fountains, and although “Double Bond” has no such practical function, it is, like the cod in Boston, a landmark, “a permanent marker for campus navigation,” Haskell says.

It is, moreover, a testament to what one might call Tonnesen’s Romantic view of artistic inspiration: “Nature is my inspiration. You can’t do any better than nature.”

“Double Bond” may not be better than nature — but seldom does 2,300 pounds of contorted and sculpted steel seem so, well, natural.