Shatterproof screens that save smartphones

University of Akron polymer scientists have developed a transparent electrode that could change the face of smartphones, literally, by making their displays shatterproof.

In a recently published scientific paper, researchers demonstrated how a transparent layer of electrodes on a polymer surface could be extraordinarily tough and flexible, withstanding repeated scotch tape peeling and bending tests. This could revolutionize and replace conventional touchscreens, according to Yu Zhu, UA assistant professor of polymer science. Currently used coatings made of indium tin oxide (ITO) are more brittle, most likely to shatter, and increasingly costly to manufacture.

“These two pronounced factors drive the need to substitute ITO with a cost-effective and flexible conductive transparent film,” Zhu says, adding that the new film provides the same degree of transparency as ITO, yet offers greater conductivity. The novel film retains its shape and functionality after tests in which it has been bent 1,000 times. Due to its flexibility, the transparent electrode can be fabricated in economical, mass-quantity rolls.

“We expect this film to emerge on the market as a true ITO competitor,” Zhu says. “The annoying problem of cracked smartphone screens may be solved once and for all with this flexible touchscreen.

The team’s findings are published in the American Chemical Society’s journal ACS Nano in the article titled “A Tough and High-Performance Transparent Electrode from a Scalable and Transfer-Free Method.”

This research was conducted by Zhu, UA graduate students Tianda He and Aozhen Xia, and Darrell Reneker, distinguished professor of polymer science at UA. 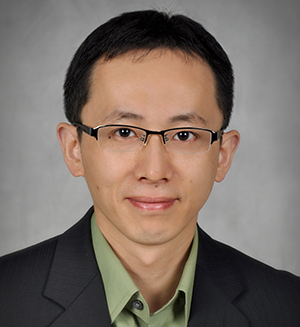 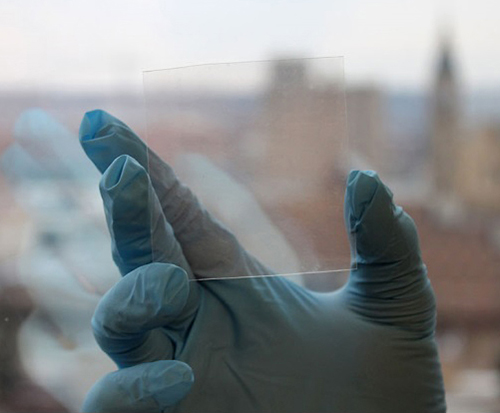 A transparent layer of electrodes on a polymer surface could be extraordinarily tough and flexible, providing for a shatterproof smartphone touchscreen.