Kyle Shepard knew when he started college that he wanted to work in health care, but it wasn't until he began working with developmentally disabled children and adults, many of them with speech and hearing loss, that he found the right career fit for him.

"The more I learned about the ear, the more interested I became," recalls the Troy, Ohio, native, who worked at Northwestern Human Services on summer and winter breaks from school. "The ear is such a dynamic and complex system, and helping people with communication and hearing impairments can be like solving a puzzle. It can be very challenging, and I like a challenge." 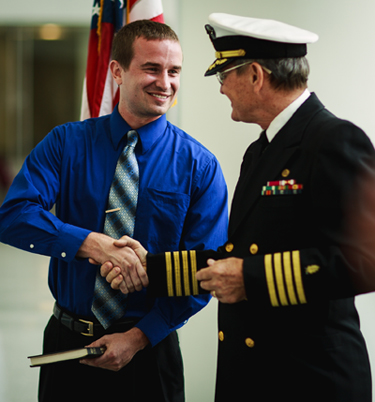 Kyle Shepard, left, is congratulated by Dr. Richard Harper, a retired Navy captain, who was on hand for Shepard's honorary commissioning ceremony hosted at the Ceveland Clinic. (Photo courtesy of Jamie DePould of the Cleveland Clinic.)

Now, Shepard is about to achieve not one but two career goals — working with patients as an audiologist, and doing so as a commissioned officer in the U.S. Navy.

Shepard will be awarded a Doctor of Audiology degree during The University of Akron's 10 a.m. commencement ceremony on Aug. 17, after completing the four-year program offered through the Northeast Ohio Au.D. Consortium (NOAC). UA, Kent State University and the Cleveland Clinic Foundation are partners in the consortium.

Then, on Sept. 15, Shepard, who has been interested in a career in the military since high school, reports to Officer Development School in Newport, R.I., to begin five weeks of training. At its conclusion, he will be awarded his commission in the Navy's Medical Corps. From there, Lt. Shepard will report to Camp Lejeune, a U.S. Marine base in North Carolina, where he will officially begin both careers.

Shepard, who did his undergraduate work in speech and hearing science, and psychology at The Ohio State University, was accepted into three graduate programs to pursue his Au.D.

"I chose NOAC because of the consortium aspect, which offers so many opportunities for clinical experiences," says Shepard. "I'm really pleased I was placed at the Akron campus — and I was lucky enough to be Dr. Erin Miller’s graduate assistant for two years.”

Miller, whom Shepard regards as a mentor and a friend, is a clinical faculty member and coordinator of the hearing aid dispensary in UA's Audiology and Speech Center in the Polsky Building. "She was one of my best teachers, and a leader in this field,” he says. “A lot of my success can be attributed to her."

After three years of coursework and clinical rotations, Shepard spent his fourth year of the program in an externship at the Cleveland Clinic.

"It was a wonderful environment to help me develop my skills," says Shepard. "The approach to patient care is multidisciplinary, so you are working with a team of medical professionals to deliver the best care possible. I will be working in the same kind of environment with the Navy."

Years of training pay off

At the conclusion of his externship, the Cleveland Clinic hosted an honorary commissioning ceremony for Shepard, who was chosen from a national pool of applicants to fill the one or two audiology spots available each year with the military. He is the second NOAC graduate in the past five years to be chosen for a spot. Lt. Jessica Snyder, who graduated two years ago, helped guide Shepard through the eight-month application process.

As he looks to the future, Shepard says his Akron Experience has come full circle.

"The last four years have flown by," he notes. "I have enjoyed my time so much and I appreciate all the help given to me. The program started with an orientation tour of the campuses and the clinic, and I just helped give the tour to the incoming class."