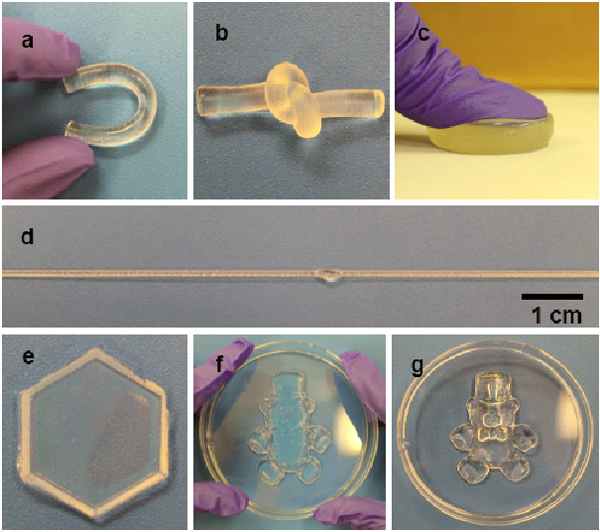 It's squishy, synthetic, flexible, mostly water and almost as tough as rubber.

No, it's not "flubber" — it's a hydrogel, and now scientists at The University of Akron are exploring new biomedical uses for this polymer-based product.

Dr. Jie Zheng, associate professor of chemical and biomolecular engineering, and Dr. Robert Weiss, Hezzleton E. Simmons professor and chair of polymer engineering, are among the most recent to contribute to the growing research of hydrogels, the gelatinous substance that, because of its toughness and plasticity, has several biomedical applications, including cartilage repair, implants for minimally invasive surgery and drug delivery.

Since, as Zheng says, "all existing methods to prepare double-network hydrogels involve multiple-step processes, which are tedious and time-consuming," Zheng and his team developed a simple, efficient and one-pot method (in which reactions occur in one as opposed to several pots) to synthesize double-network hydrogels — that is, hydrogels composed of two networks of polymer chains, one rigid, the other ductile.

Zheng not only made the synthesis of these hydrogels more efficient — he also made the hydrogels tougher.

Most hydrogels are weak and brittle, "suffering from low mechanical strength, poor toughness, and/or limited extensibility and recoverability," Zheng says.

Weiss also has synthesized a tougher brand of hydrogel, a "shape memory hydrogel," which can be bent and stretched and fixed into temporary shapes. When exposed to an external stimulus, such as temperature, light, moisture, or an electric field, shape memory polymers recover their original, permanent shape.

Weiss's shape memory hydrogels are thermally actuated, meaning they stretch and change shape when heated, and they retain this temporary shape when cooled.

Biocompatible, shape memory hydrogels have the potential to be used for minimally invasive surgery and drug delivery, Weiss says.

"Shape memory may be useful for deployment of hydrogels in biomedical applications using less invasive methods ... for example, one can implant a compact form of the device that would deploy into the usable shape after it is implanted," he says.

For example, a small form of the shape memory hydrogel may be inserted into the body, where, upon absorbing bodily fluids, it expands into the desired shape of the implant, thus filling a wound or replacing tissue.

The permeable hydrogels can also be loaded with drugs and placed into the body, where the sponge-like gel biodegrades and releases the drugs from its pores.