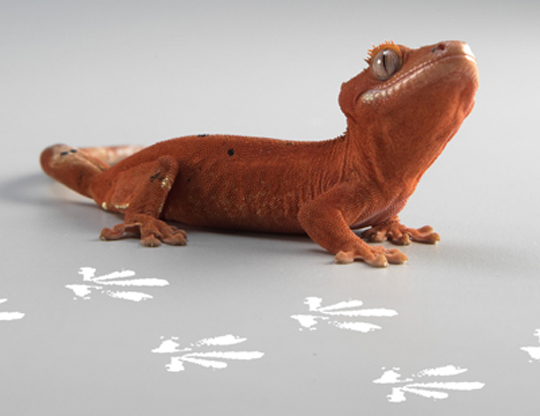 Geckos' ability to scamper up walls with ease has long inspired scientists who study the fine keratin hairs on these creatures' footpads, believed responsible for the adhesion. Researchers at The University of Akron have discovered that geckos' ability to adhere to surfaces is not all about keratin. Clues lie in the lipids left behind in gecko footprints.

ScienceShot: The Secret to Sticky Feet
The Columbus Dispatch: The gecko's trick

The researchers' analysis of the near-invisible gecko footprints reveals the presence of phospholipids, according to Dhinojwala. This material, he says, has not been considered in current models of gecko adhesion and now provides the missing link in understanding superhydrophobicity, self-cleaning and fluid-like adhesion and release of gecko feet.

Dhinojwala, a pioneer in gecko-inspired adhesive research, says the lipids in gecko footprints have significant implications for scientists working to design synthetic adhesives that could be reused thousands of times over, such as for wall-climbing robots, microelectronics, adhesive tapes and bioadhesives.