It was 18 years ago that University of Akron professor Dr. Stacy Willett arrived in Somerset County, Pa., to study what was left of Flight 93. 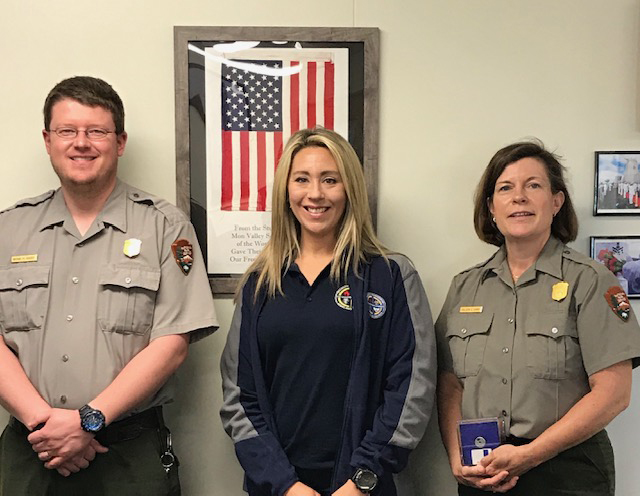 Dr. Stacy Willett with two park rangers at the Flight 93 National Memorial in Somerset County, Pa., where she donated six floppy disks of original photos she took at the Flight 93 crash site.

A few months ago, Willet, who leads UA’s Emergency Management and Homeland Security program, returned to the site (now the Flight 93 National Memorial) to hand over a few pieces of history, and reflect on her last visit there 18 years ago.

This year marks the 18th anniversary of the 9/11 terrorist attacks, a dark day that changed the trajectory of American history and touched the lives of thousands. On the night of Sept. 11, 2001, hours after terrorists hijacked commercial airplanes and destroyed their targets in the U.S., Willet applied for a Quick Response Grant, which would allow her and a small team to gather perishable data from the United Airlines Flight 93 disaster site in Somerset County, Pa. Her team was the only group to apply to study what was left of Flight 93. The team gathered answers for such questions as, “Who was the first person at the disaster site to begin the response?” and “What were your first thoughts and reactions when you got to the scene?”

“These items fade quickly and are never recaptured as accurately later in the disaster,” says Willett.

As such, Willett arrived at the crash site — a large, open field in Stony Creek Township about 80 miles southeast of Pittsburgh — the day after the attacks and spent several days at the site, talking to first responders and studying the scene. While there, she took photos of the crash scene that were then downloaded onto a floppy disk.

“Our job was to conduct an assessment of the initial disaster response,” says Willett. “We were to collect information about how the response to this incident unfolded. We collected information from the very first local responder through the federal level. We wanted to know how a small community handles a disaster of this significance, if they managed it well, and why.” 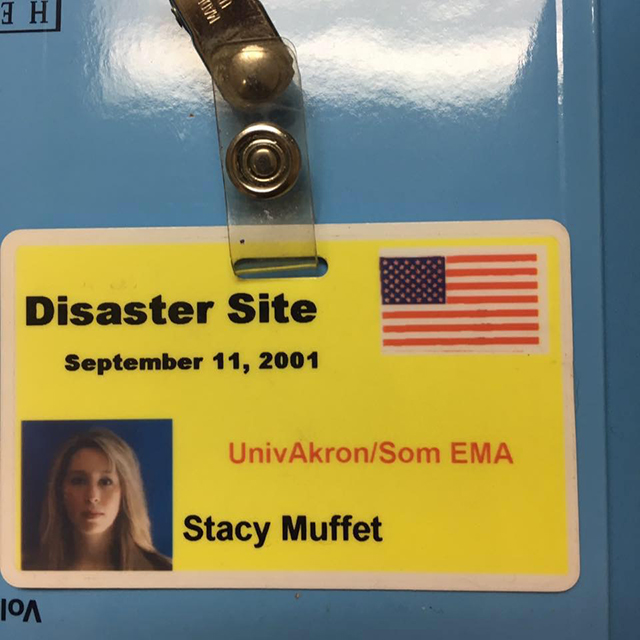 Dr. Stacy Willett’s identification badge from her time at the crash site of United Airlines Flight 93 in 2001.

According to the U.S. Census, Stonycreek Township has a population of about 2,100, a fraction of the 74,500 people who live in Somerset County.

Over the years, Willett debated what to do with the photos. Because they were on six floppy disks, they proved difficult to develop or retrieve. Willett says she thought about developing the priceless photos every year but felt protective over the sensitive material. She feared developing them would risk the integrity of the photos, that a company may misuse or steal the photos once retrieved from the disk.

This year was different. This summer, she decided to take the photos to the Flight 93 National Memorial on her way to an annual Federal Emergency Management Agency convention. She arrived feeling confident in the memorial’s ability to care for the photos and left feeling even more at peace with her decision to hand them over.

Photos will help tell the story

Willett described the memorial’s curator as receptive and welcoming. The memorial intends to digitize the photos and upload them to their photo archive along with annotations from Willett herself. Most of all, she hopes that the people she met 18 years ago will be able to see the photos she took then.

For Willett, this year also marks her 18th year of teaching at UA. Like so many, 9/11 altered Willett’s personal and professional life. She says that 9/11 enormously changed the way her field of emergency management operates. Discussing 9/11 in her classes is unavoidable. As hard as that is, she hopes people learn that disasters, while horrible, provide a tremendous opportunity to bring people together.

Although 9/11 is not a national holiday, Willet hopes that people will arrive to work and classes on Sept. 11 being respectful of the grief others may be feeling, remembering that 9/11 remains a very hard day for so many affected by the catastrophes.