Technology as teacher or babysitter? 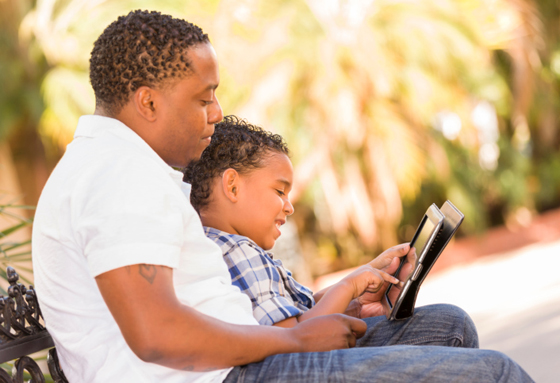 Most children use the summer break from school to relax and play. Most parents hope their children will learn something over break, and with all the offerings of mobile technology, the options are vast — and confusing. So which technological amusement is more teacher than babysitter? How can children benefit intellectually and academically from the many apps available on iPads, smartphones and other mobile devices?

The challenge for parents is to make sure that their children are using technology appropriately — that they are exercising their minds and not merely their thumbs. Jeremy Brueck, director of the Digital Text Initiative at The University of Akron's Center  for Literacy, offers the following tips.

Younger children, of course, may not be ready to set up and synchronize a device, to navigate the menus or make purchases from the app store — in which case parents should manage the device until the child is older.

For older children (about fifth grade and older), parents should consider drafting an agreement about usage. Brueck's 13-year-old twins signed an agreement that set boundaries for "Responsible Use" and "Productive Contributions to Society." For each family, the parameters will vary.

For children of all ages, parents should establish a "work before play" rule. During the summer, this could require children to get all of their chores done or to practice the piano before using the mobile device. In addition, families should set screen time rules, for example, "no devices at the dinner table."

Growing up in a digital world, it's no surprise that Aiden Brueck, who just turned 6, is already a whiz with mobile devices — under the watchful eyes of his parents, of course. He even has his own Twitter handle — @bruecka23.

Tip #2: Don’t rely too much on built-in controls. Parents need to be aware of what their children are doing with mobile devices. Brueck approves of built-in settings and controls that censor content, but warns against overreliance on these controls. Parents should take it upon themselves to monitor and intervene — especially when children are shopping for applications.

"This is important, not only in terms of censoring content, but also for financial reasons," Brueck says. "The best system is for kids to ask for permission to purchase an app, and then for parents to review and approve the request."

Another option, Brueck points out, is for parents to set up an Apple ID account for children without entering credit card information. Brueck recommends giving kids a preloaded gift card so they can buy content without spending a fortune. Meanwhile, parents should be wary of free apps that contain ads and in-app purchase options.

Strike a balance of activities

"This gives children a sense of ownership, since they are choosing what to do when the devices are off," he says.

Activities could include reading, playing with LEGOS or board games, drawing, or playing outside.

Tip #4: Research apps before you buy. The app world is constantly growing and changing, sometimes for better and sometimes for worse, and keeping up with what is appropriate and relevant can seem overwhelming. Parents should therefore test each app before letting their kids use them.

"Don’t be afraid to delete apps that turn out to be duds," Brueck says.

Brueck estimates that for every 10 free apps that are downloaded, eight of them are duds.

Brueck urges parents and kids to explore apps together. Parents need to determine how much of their children's screen time will be spent on fun activities, and how much on educational activities. Mobile devices can be used to play games, but they also allow users to be creative and produce content. Educational apps with a gaming component, such as Toontastic, AudioBoo and Puppet Pals, both entertain and help to promote essential skill development for some children.

Tip #6: It's about parenting, not the device. Learning begins at home, and parents play a key role in their children's social and educational development. Giving a child a mobile device is an opportunity to teach that child, through active involvement,  about the responsible use of technology.

"As a parent, you need to cultivate an understanding of what it means to be a responsible user of technology," Brueck says. "This means that parents will need to model and guide their children and participate in device-based, cooperative activities with them. Parents who allow their children to use mobile devices should realize that this is a continued investment in the child, not just a one-time fee to purchase the device."