UA researchers find the healing properties of a spider’s web

The study of spider webs has led to a discovery that will generate new kinds of medical sutures embedded with medication. The University of Akron scientists have developed a novel synthetic material similar to a specific kind of silk spun by an orb spider. The specific web design is known as BOAS because it looks like beads-on-a-string in a circular web. The beads are glue droplets. The replication of this design can potentially be used as strong and flexible sutures that contain medication embedded in these bead-like structures.

Here is a close-up view of synthetic beads-on-a-thread.

The researchers developed the new biocompatible thread after meeting with physicians who specialize in wound healing and who expressed the need for better material-related solutions to medical problems.

The scientists published their findings in the American Chemical Society journal Langmuir in an article titled Spider Silk Inspired Functional Microthreads and will present at two upcoming scientific conferences. The next step is to apply for funding to speed the commercialization process to create medical materials that can help heal injured tendons or tissue.

"We have been very interested in architecture of adhesives produced by spiders and were very intrigued to understand why spiders use the BOAS structure," says Vasav Sahni, UA polymer science graduate student and lead author of the article published in Langmuir. 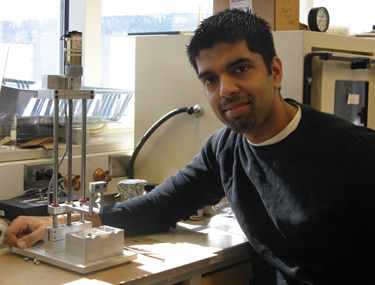 Polymer science graduate student Vasav Sahni with equipment he and his colleagues designed and fabricated to create synthetic beads-on-a-string silk for biomedical use.

"We used fluid mechanics concepts to vary the size and spacing of the glue beads and mimicked the spider silk threads by using commercially available materials, such as nylon," Sahni says, adding that he and his colleagues designed and fabricated a specialized piece of equipment to develop the threads.

Rather than place individual glue drops on a string, the researchers' novel technique coats threads uniformly with glue. The glue forms waves, which morph into beads that create greater-than-average contact areas and also release energy, or adhesive strength, when peeled. The beads can potentially also create a structure in which medication can be placed and released.

Dhinojwala, Sahni and their research colleagues developed the biocompatible thread to address one of the needs identified in a pilot program with the Austin BioInnovation Institute in Akron (ABIA). The scientists shadowed medical experts at the Akron General Hospital wound clinic, the Akron Children's Hospital burn unit and Summa Health System, assessing needs and developing solutions.

The researchers plan to apply for a $25,000 ABIA grant to fund development of aprototype and hope to see it commercialized locally. The researchers say their simple and scalable technique allows for rapid and large-scale fabrication of the new adhesives.