Blind moles use beauty for function, not fancy

Scientists have long wondered why a blind mole that lives in underground darkness has beautiful iridescent hair. After all, many animals or birds with magnificent features exhibit their colorful beauty for mating purposes. Now, a new study shows that the iridescent hairs of the blind golden mole, Chrysochloridae, aren't for attracting potential mates. Instead, the shiny coats help the rodents function efficiently underground. 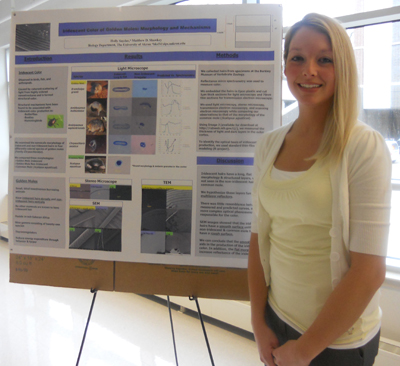 "These moles are blind and live underground and, consequently, don't use the colors to communicate with one another as they would typically do by way of color,"  Shawkey says. He and his research colleagues discovered that the moles' hair cuticles, arranged in multiple layers of thin material, bend light and create a spectrum of colors.

World's only iridescent mammal is a shiny accident, New Scientist

The World's Only Iridescent Mammal Is Blind and Lives Underground, Popular Science

Using microspectrophotometry, electron microcopy and optical modeling, the researchers also found the moles' hair is flat like a pancake, increasing the amount of surface area and light reflected.

"The color just might be an incidental byproduct," Shawkey says. "These moles have evolved structures that have two distinct properties: color and wear-resistance. This could give us inspiration for developing new multifunctional materials. Who knows, maybe a hair-care company could apply these findings to make human hair iridescent!"